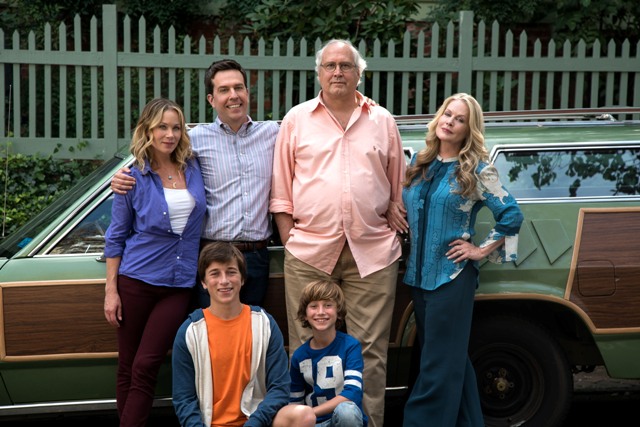 Per Matt
As the saying goes, “Don’t judge a book by its cover.” While some previews may give away entire movies, this one is actually NOTHING like its trailers: It’s much dirtier and funnier than it looks!

No longer associated with National Lampoon’s, this Vacation is a sequel and not a remake. All grown-up from the previous films, Rusty Griswold (played by Ed Helms, this time) secretly plans a cross-country adventure to Wally World with his family. Little does he know, his family-bonding misadventures practically follow the previous road trip he took as a child with his parents (National Lampoon’s Vacation).

While each of the Vacation movies varied in terms of comedy and originality, this Vacation follows Rusty, his wife (Christina Applegate) and two sons (Skyler Gisondo and Steele Stebbins) as they get into more than a few ridiculous situations. There are many over-the-top jokes (like its cinematic predecessors), but this one has the heart of a family film (which is generally shown via its commercials).

Helping this crazy family along with their outrageous road trip are some hilarious secondary characters, featuring Charlie Day, Keegan-Michael Key, Regina Hall and Ron Livingston, as well as a great cameo by The Walking Dead’s Norman Reedus! The most outrageous, by far, showcases how Chris Hemsworth (Thor) will go to great lengths for a belly laugh (or two). Who knew he had such great comedic timing?

Chevy Chase, in a limited role, looked really bad and totally out of his mind, regardless if he was on medication (or not). He was somewhat coherent, unlike his recent appearance on SNL’s 40th anniversary special. It’s too bad he played such a minor role.

Vacation is quite a trip; however, there are more than a few unresolved plot holes lingering about. For the most part, this is an enjoyable movie, but it does seem to be a facsimile (Google it, kids!) of the original 1983 movie. While there may be new faces on the screen, many of the jokes feel dated.

Strength: Raunchy comedy with many good actors!
Weakness: Overall storyline feels too much like the original movie.
WTF Moment: No cameos by the previous actors who portrayed Rusty & Audrey, along with Randy Quaid’s Cousin Eddie. Where are they?