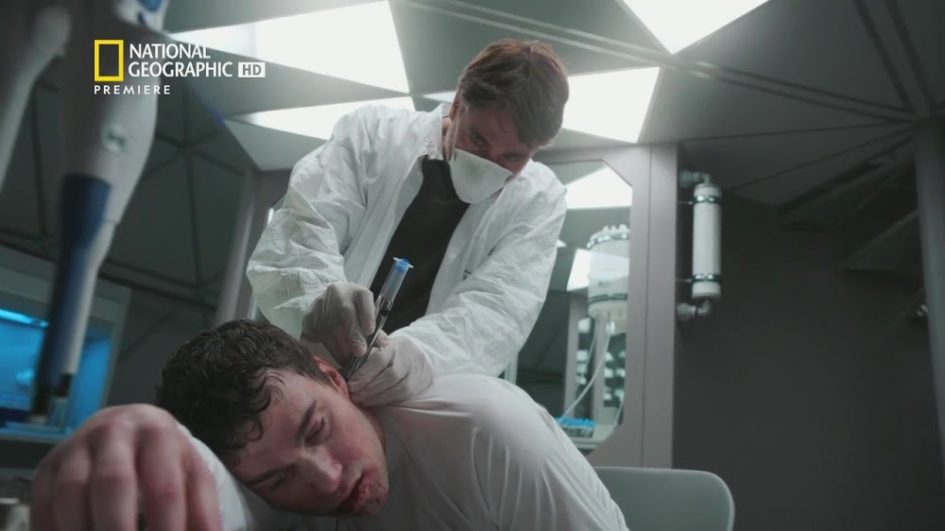 The exact moment when Mars switched from science fact/docuseries with dashes of futuristic science fiction to inevitable horror in outer space is when I fully realized this National Geographic series could get a bigger audience and should get the green light for another season.

Survival horror was the theme of “Contagion,” which was directed by Stephen Cragg and it was vaguely reminiscent of John Carpenter’s The Thing. As Lukrum drills for an underwater basin, something has infected the crew, making them sick. And this mysterious outbreak is spreading quickly, to both isolated off-world colonies. Naturally, both sickened groups are quarantined within their respective emergency rooms and all drilling is temporarily halted until a vaccine is discovered.

Discovering and dealing with a mutating microbe on a planet that’s millions of miles away seems pretty scary, much like dealing with infectious diseases with a deadly timeline, while trying to figure out who’s Patient Zero and how to combat them. Even though this episode was filmed from a scientific perspective while dealing with a horror theme, I really enjoyed it. Diseases can be seemingly found just about anywhere, from deep within the melting Arctic permafrost to the underground shafts that might hold water on the Red Planet.

While the TV episode was hardly claustrophobic enough for my tastes, it was a decent examination of working under pressure with a life-and-death outcome. And the show also proved with just a little bit of tweaking, the series could attract a different type of audience, depending on the storyline. I’m thinking if the series could be something like The X-Files, where some episodes are mythology themed, while others are Monsters of the Week, horror fans could be attracted into watching this series with a little more drama and a little less documentary intertwined within the storyline. That could also help out with the overall pacing, as it could easily be jump started into moving a little faster.

There really haven’t been a lot of disasters facing the IMSF and miners in the second season of this National Geographic television series. There’s been a little drama so far, insomuch as these separate groups of people have separate types of goals and separate ideals. They’re basically like feuding roommates, and the house they’re living in is the Red Planet. Only a couple of deaths have taken place this year on the show, but there should probably be more than only a couple of risky life-and-death scenarios that take a turn for the worst, just trying to keep these stories remotely realistic.

With only a few more episodes yet to air, this has been a bit more enjoyable than the previous season, and that’s a good thing. If only the filmmakers could hit fast forward on the slow-burn storylines, it could be a LOT better. And if more horror elements could be added, with possibly a few more dramatic turn of events, then it could become be a great series. Here’s to hoping for bigger and better days for Mars in the near future…