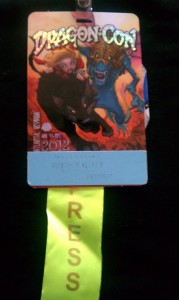 So far, it’s been a great convention season! Previously, I’d represented Zombies In My Blog at San Diego Comic-Con, and recently represented at DragonCon!

The last time I visited DragonCon was in 1999 (when I was covering the con for TNT Roughcut.com) and since then, a few things have changed. For one, the show has gotten bigger… a LOT bigger! I don’t remember much of the last millennium, but I could have swore previous shows took place within one of downtown Atlanta’s larger hotels (possibly on a couple of hotel floors, but I can’t be sure), including a large dealer room and autograph area. Back then, I managed to score some celebrity autographs from a few stars of Star Wars (David Prowse, Phil Brown), Babylon 5, Adam West and one of my all-time sci-fi faves, Richard Herd (V, Quantum Leap, Star Trek: The Next Generation, Voyager).

Fast forward 13 years, look what we have now: Expanding into five hotels, DragonCon totally takes over downtown Atlanta (around Labor Day weekend) for a five-day period. DragonCon is historically known as a convention for the fans, by the fans. It offers an insane-amount of entertainment options, from many, many entertainment tracks, the celebrities, the Zombie Walk, the Zombie Prom, the parade, the Masquerade, the blood drive, the films, the parties, the concerts, the gaming, the art, the panels, the charity auction, the AMAZING cosplayers!, so much steampunk sampling, three hotel floors of dealer rooms and all the rest I missed while being absolutely worn out and needing a break! That’s my kind of con!

The entertainment is broken-down into different “tracks,” also known as genres.

To say the least, I didn’t exactly know what to expect. I worked as an official member of the DragonCon Media crew and had little time to relax — just as I like it. I can rest when I die. When it comes to conventions, I go all-out, everyday, then totally crash at the end of the day. Rinse and Repeat. This was no exception.

Along the way, I was lucky enough to meet David Cross (Arrested Development) and Chris Hardwick (Attack of the Show, Talking Dead, The Nerdist podcast).

The unofficial attendance of DragonCon 2012 was over 52,000 people and there were 39 costume contestants at the Masquerade. That’s the big time, folks. This wasn’t the first, and definitely won’t be the last DragonCon I’ll be attending. I just hope to cram a lot more sci-fi and fantasy offerings before I reach maximum-capacity-geek sensory overload next time!