The Bad Guys Will Steal All of Your Emotions!

Cartoons are typically made for kids (not counting things like anime or The Family Guy). Kiddos flock to these films. They bring the impossible to “reality.” Want animals that talk and act like humans? Cartoons. Want some slapstick comedy that can go over the top? Cartoons. Want to parody live-action films while making them family friendly? Cartoons. Animated films just offer so much in the way of creative freedoms that live-action flicks cannot.

My 7-year-old daughter saw a preview for The Bad Guys a few weeks ago. The preview wasn’t much to write home about, but it clicked with her. She became slightly obsessed with wanting to see it. I was not fully on board yet, as it just felt like a cash grab and when I mark a film as a cash grab in my articles, it usually doesn’t end well for that movie’s star rating.

From my perspective, it was just another talking-animal movie, one we have seen 1,000 times before. But I still acquiesced to her request and got two tickets to see The Bad Guys.

In the world of The Bad Guys, we find a crew of thieves. The team consists of the leader Mr. Wolf (Sam Rockwell), Mr. Snake (Marc Maron), Ms. Tarantula (Awkwafina), Mr. Piranha (Anthony Ramos) and Mr. Shark (Craig Robinson). This creature crew has the whole city of Los Angeles in terror at their next caper, even though the team does not come off as violent.

After getting away with several brazen robberies, Governor Diane Foxington (Zazie Beetz) insults the gang, daring them to steal the Golden Dolphin award that is being presented to Professor Rupert Marmalade IV (Richard Ayoade), a guinea pig philanthropist who showers those around him with kindness and goodwill. Though their attempt is initially thwarted, Mr. Wolf devises a plan: Turn a new leaf and become “the good guys.”

Does Mr. Wolf’s plan work, or are there forces working against him and the team? 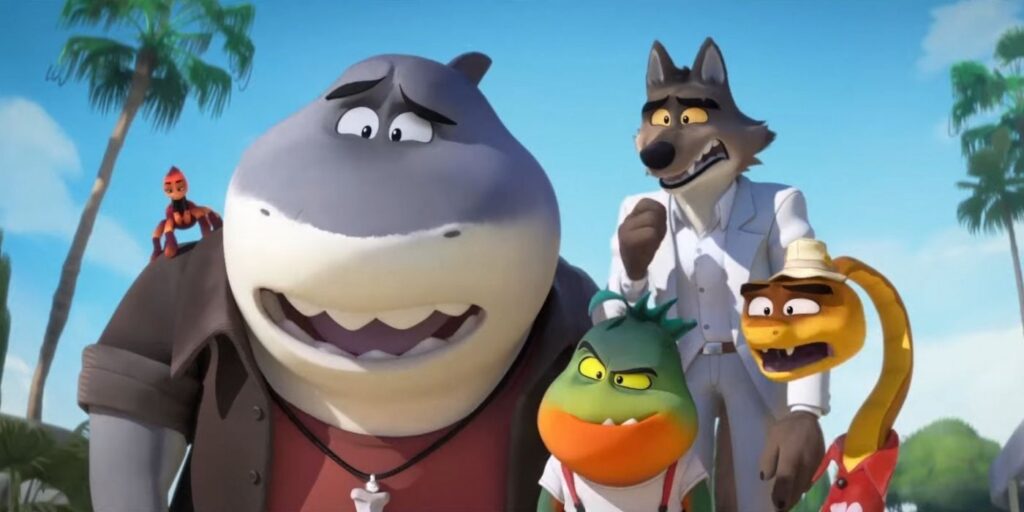 The Bad Guys very much felt like it could have been a follow-up to some of the most famous heist films around. Immediately, my mind compared it to the Ocean’s 11 film series. Mr. Wolf is portrayed as a cool-headed, slightly narcissistic leader, much like Danny Ocean.

His wise-cracking second in command, Mr. Snake, dresses in Hawaiian shirts and hats, reminding me of a cross between Rusty Ryan and Saul Bloom. And each of the other animals on the crew fills out the other roles quite nicely. They play off each other’s strengths and weaknesses well, becoming a highly tuned gang of robbers, much like their Ocean counterparts.

One thing that confused me about the film, though, is the animals. We have characters like The Bad Guys crew, the governor and Professor Marmalade who are completely anthropomorphic. They interact with the humans of Los Angeles as you or I would. However, there are animals in this world that do not possess this trait.

In one scene, The Bad Guys try to “rescue” thousands of guinea pigs from a research facility. These guinea pigs are just like the ones in the real world, without the ability to speak or even walk on two legs. Yet, Professor Marmalade, who is also a guinea pig, does have human qualities. It is never explained why some animals have these traits and some do not. It doesn’t detract from the film. It is just something I thought about while watching the movie.

My daughter was enamored with the film. I asked her several questions after watching, just to gauge her thoughts. She loved all The Bad Guys but had a special place in her heart for Mr. Wolf, because he was “fluffy, funny and a good boy.” Her favorite human character was Chief of Police Luggins (Alex Borstein), ’cause, “She was funny and a good cop.”

I cannot reveal her favorite scene since it would give away too much of the film, but I had to agree with her on it. She said, “That movie had me laughing, crying and excited all at once, daddy.”

I have to agree with her on this. The Bad Guys is a sleeper hit film that I think many people may skip over. But don’t! My daughter and I give it a perfect five-star rating.

It is a family film that has something for everyone in it. Do you like comedy? How about action? Do friendship dramas fit in your wheelhouse? Do you just want a movie that you can enjoy without worrying about how your kids will react? The Bad Guys is that film. Do yourself a favor: Take your kids and/or family (or just yourself) and check out The Bad Guys. You won’t regret it