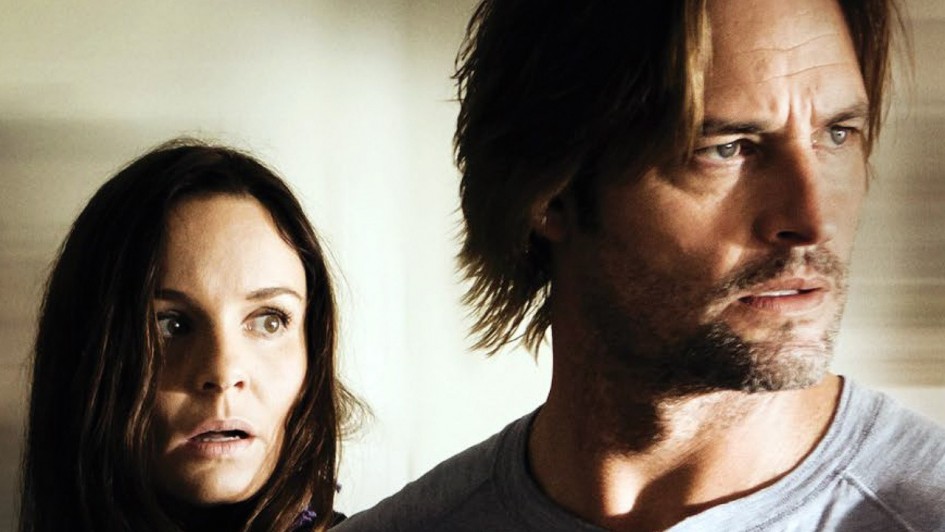 This new series will be old news to those who stay on top of their science-fiction television and On-Demand services, as USA Network has done a great job helping those savvy viewers get a leg up on the mainstream by offering up the pilot and second episode of Colony for the last few weeks. However, the buzz of the day is tonight’s broadcast premiere of this fresh dystopian tale of alien occupation and human resistance. Starring Sarah Wayne Callies (The Walking Dead, Prison Break), Josh Halloway (LOST, Mission Impossible: Ghost Protocol) and Peter Jacobson (House M.D., Ray Donovan), this much-anticipated debut is exciting audience expectations while being tempered with the hit-or-miss reputation of USA. So far, the tale is off to a decent start.

We are introduced to a reality in which some sort of alien occupation (at least in the pilot’s setting of Los Angeles and we assume all over the world) is coupled with some level of human government collusion. Mostly, people live out their daily lives unaffected against the backdrop of massive containment walls and intimidating military police. In some cases, this reality is more oppressive, as we get a strong hint of constant surveillance, heavy-handed police actions and a consistent fear of what most of us would consider small acts being taboo (such as a schoolyard scuffle or the possession of guns and booze). There is a clear gap in technology in place, likely purposeful, which is evident in the apparent lack of televisions or radios, and possible confiscation of mobile phones (Callies has a secretive conversation via a retrofitted pay phone with “Poor Man’s Denzel” Tory Kittles.) Something big has clearly gone down, and we’ve stepped right into the middle of it.

As we’re introduced to the primary subjects of our story, the Bowman family, we have an implication that Callies’ Katie and Halloway’s Will have some sort of looking past, dark secrets and shared sorrows. Following some regrettable type-casting lines, Callies’ plays yet another do-gooder, attractive almost-hero, doing her best to help others while slinging dozens of her trademark shifty gazes and panic-eyes as she goes about her day. Holloway, always cast as the rough-edged rogue, is obviously the smoldering bad-boy who will likely do his share of unpredictable good against “the man” — or “them” — whoever “they” turn out to be. (“No one ever sees them.”)

There is a good chemistry between these two leading actors. Callies has always benefited from an everywoman sex appeal and she plays her characters with sudden bursts of passion — an explosive notion which plays well in the first “steamy” scene involving her and Halloway’s “hot carpenter or pool boy meets Kato Kaelin” schtick. The “skin time” is a little unbalanced; however, as she continues a trend of conservative levels of exposure while receiving what has become her typical sweaty, stubble-sporting beautifully-toned on-screen partner. This may be played off later in the story, as we detect (and subsequently learn of) elements in their lives which establish major rifts to disrupt their union.

In the category of the humans who’ve “sold out” to their alien overlords, we have Jacobson’s Alan Snyder — a “provisional governor” who is the very definition of a slimy mid-field politician, looking out for number one and weaseling his way through a presumably complicated maze of decisions. There is a certain amount of us-vs.-them among the humans, as we’re eventually presented with a “Collaborator” and “Resistance” dynamic, and the dramatic ways those two camps will affect our primary characters.

There are shows which certainly scream “And we’re off and RUNNING!” and there are shows which snooze along at a sleepy meander. Colony is neither of these. It comes in at a pace which may be a turn-off to some or incite the intrigue of others. This is an item of concern, as such a pace can cause a swift loss of interest (see also, Revolution). One should expect things to take off a bit more, if the show is going to keep its audience invested in the very-competitive TV market of science fiction.

We may be in an era, with these advance binge screenings clearly shooting across Netflix’s bow, where pilots are becoming weaker, in favor of a two-four episode launch-arc. While that is a very progressive and welcome notion in many ways, it may damage the traction with “normal” viewers or DVR time-shifters. We will simply have to wait and see on which side of the USA seesaw this one comes to rest.

Overall, Colony is worth a look for at least the first few episodes, while we verify that it’s not just Alien Nation meets Fear the Walking Dead. Be sure to check it out tonight on USA or just go ahead and load it up online.