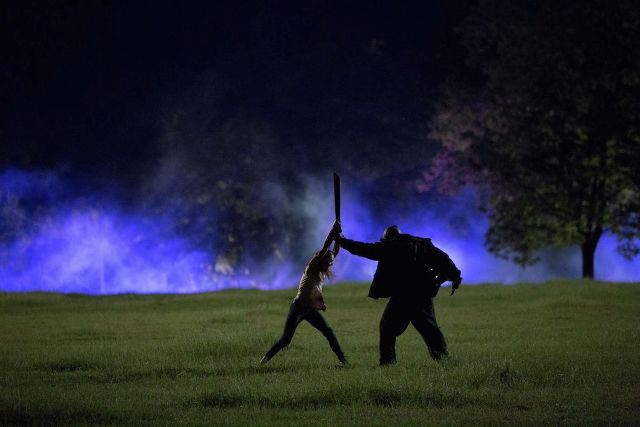 Nancy Cartwright (played by Malin Akerman) is a struggling actress, best known for portraying a scream queen in the cult-classic movie, Camp Bloodbath. But three years after a tragic car accident, daughter Max (Taissa Farmiga) is still trying to pick up the pieces of her life. On the anniversary of her mother’s death, she’s coerced by her friends into attending a late-night screening of the movie, along its sequel, as a special guest. When a spilled bottle of vodka and a lit cigarette practically burn down the theater, the group somehow escapes, only to awaken inside the movie, where Max gets to spend a little bonus time with the feature-film version of her mother… and get stalked by the masked serial killer, Billy Murphy!

Throughout the majority of the film, the main characters spend their time inside a movie within a movie, where everything has a warm glow about it — with the exception of the black-and-white flashbacks — and there’s some great intentionally bad dialogue. When the credits roll, in the sky, the film has finished, but journey for these characters is not necessarily complete.

The Final Girls is really a movie about letting go, but at times the film tries to balance multiple genres unsuccessfully. Not actually a horror movie, there are genre elements stitched throughout the script, but no true scares, nudity, gore or even an R rating. Not a true comedy, there’s a couple of meta moments, but just not enough self-awareness or laughs throughout the film.

With a running time of only 91 minutes, the movie’s not very long, but that’s plenty of time to spend trying to uncover the previous source material-used-as-plot devices here, which is half the fun.

Will there be an actual sequel for The Final Girls, since the main characters eventually wind up inside a horror sequel, as well? Just like a never-ending horror franchise, only time will tell.

Strength: A fun movie that never takes itself too seriously.
Weakness: Too many different genre elements are used.
WTF Moment: What, exactly happened to the characters? Are they trapped within purgatory, is it all just a dream or something else altogether?