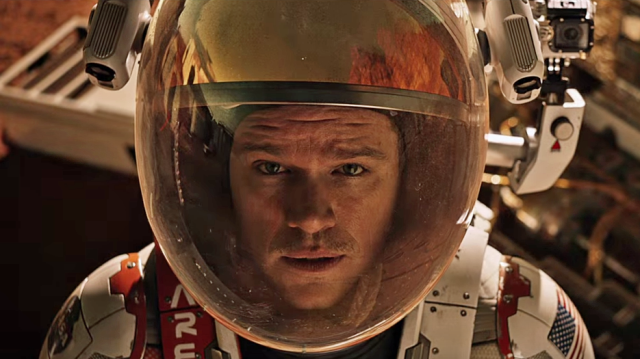 Per Matt
It’s been a long time since a movie made space exploration cool again, but The Martian has done just that. Ridley Scott’s movie, based on Andy Weir’s best-selling book, focuses on science fact, instead of purely science fiction, creating a gripping space adventure.

After getting abandoned by his crew during a severe dust storm on Mars, Mark Watney (played by Matt Damon) must learn to survive on the uninhabitable planet, under the worst conditions possible. Not only an astronaut, but as a botanist, he must grow his own food and use science to formulate water, while minimizing the never-ending problems that continually arise. Once NASA, along with his former crew, eventually make contact, The Martian quickly becomes a search-and-rescue movie.

Commander Melissa Lewis (Jessica Chastain) feels guilty for leaving Watney behind, Flight Director Mitch Henderson (Sean Bean) struggles to get his crew back home and NASA Administrator Teddy Sanders (Jeff Daniels) faces a limited budget and public criticism for creating the situation in the first place. I really enjoyed enjoyed Chiwetel Ejiofor’s role as a NASA engineer, Kristen Wiig in a rare non-comedic role and Donald Glover’s wacky astrodynamicist, whose Rich Purnell Maneuver might actually bring all the astronauts home safe and sound. Matt Damon thoroughly enjoys the spotlight, as his character displays gracious amounts of humor throughout the film, although he’s basically talking to the camera the entire time, filming video journals. Near the conclusion, Damon really hams it up, as the character gets a little crazy.

Keeping It Geeky:
There’s Lord of the Rings and Star Trek references implanted into the movie, but the best Easter Eggs involve Marvel references. See if you can spot them!

In a battle against time and resources, The Martian feels like a realistic movie, one where creative engineering and problem solving might actually save the day in outer space. Stranger things have actually happened in real life, like Apollo 13. And with the recent discovery of water on Mars, this movie couldn’t have been released at a better time!

Strength: Incredible space adventure based on science fact (not fiction).
Weakness: Matt Damon doesn’t get much human interaction for the majority of the film.
WTF Moment: A stomach injury to Watney requires a quick and intense surgery, where his stomach requires staples. This is all the more unbearable in 3-D. You have been warned!

Notable Quotes:
– “In your face Neil Armstrong.
– “I’m going to have to science the shit out of this.