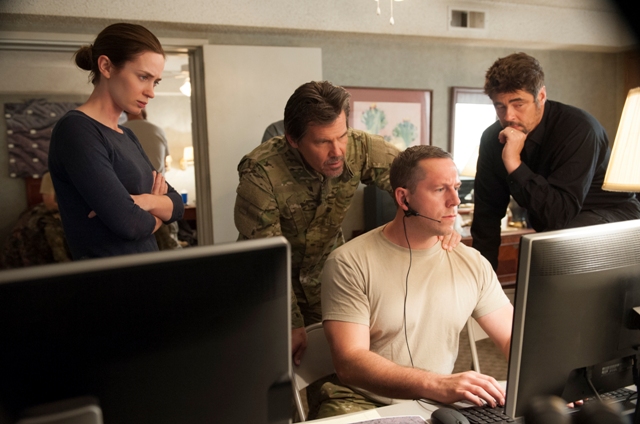 Per Matt
Sicario translates as a “hitman” in Spanish. In the Lionsgate movie of the same name, it takes a certain type of personality to tackle the war on drugs near the Mexico-U.S. border, one which meshes perfectly with the brutal lawlessness and violence used by the aforementioned assassin.

Emily Blunt portrays Kate Macer, an up-and-coming FBI Agent who joins a task force to hunt down multiple Mexican drug lords in this gritty and tense story. Joined by her colleague, Reggie Wayne (played by Daniel Kaluuya), the two agents attempt to uncover the facts as they fight for their lives. Matt Graver (Josh Brolin) leads the unit, assisted by the mysterious Department of Defense Consultant, Alejandro Gillick (Benicio del Toro).

Both Macer and Wayne are often in the dark throughout their mission. Much like a film noir, the story unfolds simultaneously for the main characters as it does for the audience. Slow to unfold, the story unpeels like an onion, with each clue leading to another. Unfortunately, the tempo of the storyline is uneven. There are long gaps of time where almost nothing happens, then with a rush, there’s vicious shoot outs, gory deaths and the story moves along quickly… until there’s more dead space in the script. This rinse-and-repeat cycle continues for the duration of the movie.

But when the action breaks out, it is fast and furious. At one point, the soldiers don night-vision goggles and work their way into an underground tunnel along the Mexico-U.S. border. At this point, the movie briefly becomes a first-person shooter. Fans of the video-game format will quickly recognize the situation as something pulled straight out of Call of Duty (or other similar game).

Fans of The Walking Dead, be on the lookout: Jon Bernthal plays another charming-but-deadly character, this time he’s putting the moves on Emily Blunt!

Sicario covers the gamut, from illegal aliens, to money laundering, to crooked cops, but there’s usually a diversion going on, for both the audience, as well as the film’s characters. This is where Benicio del Toro shines. Until the final frames of Act III are revealed, the audience never truly realizes his character’s backstory or the length he’ll go to, in order track down the local drug lord. He’s always two steps ahead of everyone else (whether they are on his side or not). Laws are meant for breaking, as he slowly ascends the drug-dealer hierarchy, until he eventually finds The Man.

Bringing justice to criminals isn’t an easy task, no matter which side of the border you’re talking about. It’s one that takes a team (along with the occasional bending of rules) to get the job done.

Strength: Powerful, violent story in the vein of Training Day.
Weakness: Uneven storyline is deathly slow then zooms into fast forward.
WTF Moment: Blink and you might miss del Toro giving a deadly wet willy to a prisoner.

Notable Quotes:
– “I just tried to have sex with my hitman.”