The Power of the Dog Attacks Psychological Torture, Trauma 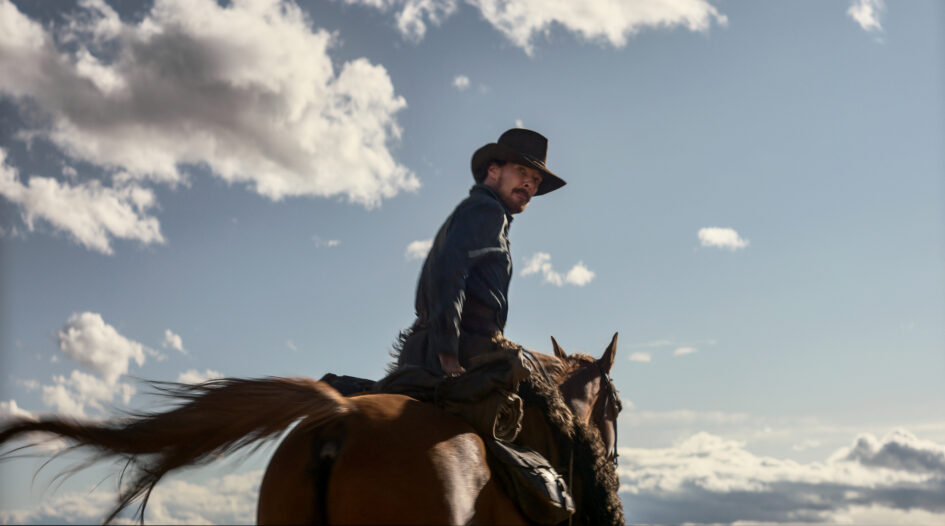 Benedict Cumberbatch looks back as Phil Burbank in The Power of the Dog. Photo Courtesy: Netflix

Per Matt
Jane Campion’s eighth feature film, The Power of the Dog, takes a bite out of love, grief and jealousy, as the multi-hyphenate filmmaker brings psychological torture to the American wild, wild West in this big-screen adaptation of Thomas Savage’s 1967 novel.

Phil Burbank (played by Benedict Cumberbatch) is no superhero. As the rough-and-tumble leader of a group of Montana ranch hands, he’s seen heartaches, but he simply cannot communicate with his brother, George (Jesse Plemons), at all. The fact is Phil’s a bully, and he doesn’t just talk down to his brother.

After a whirlwind romance, George brings home a bride and her son. This only irritates his volatile brother even more. Rose (Kirsten Dunst) turns to drinking, while Peter (Kodi Smit-McPhee) becomes a shut-in, hoping to preserve the peace.

But suddenly, Phil has a change of heart.

First, he’s full of humiliating insults, finally training the young man to become a cowboy. But what’s the endgame, here?

Impending dread seeps into the film. You never really know when it’ll strike, thanks in part to the score by Jonny Greenwood (of Radiohead fame). At first Phil’s actions feel contradictory to his character, as if he’s doing it to hurt Rose, who must surely know something sour will soon happen to her son. But then, there’s a moment where the antagonist actually becomes human, and his heart grows three times bigger…

And then the twist of fate proves that vengeance is best served cold, even in the 1920s.

I was genuinely impressed with the range of acting on display by Cumberbatch. Poor Dunst didn’t have much character development other than crying and shrieking in pain and Kodi played it cool throughout, so you never quite knew what the character was up to.

The emotional story elements wore me out, while the tall tales of Bronco Henry might have been lovingly embellished throughout. The hard-knock life is hard to watch at times (especially the close-up cow castration done without gloves).

Blink and you’ll miss Thomasin McKenzie, as the young “it” actress was mostly wasted in her minor role here. That was too bad. And with all the recent Yellowstone craze going on, it feels appropriate for this film to premiere this year. Another noteworthy moment happened early in the movie, when Dunst’s character was speaking to her son, Peter. That meta moment made me laugh, especially after No Way Home revived many of the past Spider-Man actors, (Dunst was one; Cumberbatch appeared in the most recent release).

I hate that I loved the twist ending, but I won’t spoil it, as you really should be able to watch it in order to enjoy it yourself.

The Power of the Dog has won many awards through the current awards season, and I expect it to collect quite a few more before the Oscars broadcast their winners. The film received 10 nominations from the Music City Film Critics this year and I expect to show the movie some support for the Association’s final vote. I expect Dog will be a big winner this year. And for good reason. It’s a great movie.

Check it out, now available on Netflix.