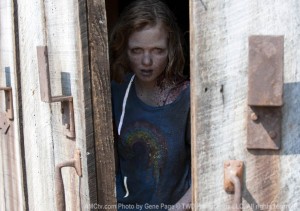 And so, the “Mid-Season Finale” has come to a close. What a stupid title. All it means is new episodes won’t air until February. The show is still filming and production is still running. So, until then, I’ll do a recap of this episode:

SPOILERS! SPOILERS! SPOILERS!
————————————————-
So, it’s come to this? Brute force is the only thing that will show Herschel the True Way: The people aren’t sick. They’re Walkers. And they’re “Pretty Much Dead Already.” And it seems that those who hold weapons are now in charge. There’s a power shift. No longer will the visitors answer to Herschel, and perhaps Herschel will be evicted. The inmates now run the asylum.

This episode sets up a lot of drama that will play throughout the last half of Season Two and will build to Season Three. Shane finally learns of Lori’s pregnancy and a semblance of reality enters her head, the kid may be Shane’s. It most likely is, but she won’t admit it. Using Lori’s pregnancy as the main reason for the crew to remain at Herschel’s Farm is a bit lame and convenient, but it is what it is.

All of a sudden, Maggie (Lauren Cohan) gets some great dialog, and man, has this actress some amazing acting chops!!! Is there a budding romance brewing between Daryl (Norman Reedus) and Carol (Melissa McBride)? Only time will tell. But using the Cherokee Rose as a brief call-back was great writing, even if brief. Who is Jimmy? And why is he even on the show? Totally useless character, as are the rest of Herschel’s kids except Maggie, she is a great character.

Introducing the swamp as a locale inside this universe will create some great drama in episodes to come. Expect that quicksand to play a major factor in more than a few episodes (I predict it’ll impact the Season Two Finale, you’ve heard it here, FIRST!). The shoot-out at Herschel’s Corral was expected, but revealing Sophia as a Walker was a relief. Using her as the McGuffin was wearing thin, to say the least. Move on, nothing to say here. Hopefully, Shane will leave with a crew and explore a bit more of the world and the show will be contrasted from the unexpected violence he encounters en route to Ft. Benning and the peaceful nature at Herschel’s Farm. I hope the show will follow both of them, should they separate. The show’s a little slow solely focusing on Herschel’s Farm.

Glenn shows affection toward Maggie and becomes a man, standing up for himself. And once again, T-Dog is left out of the episode until the climax, and gets one line of dialog. Honestly, Mazzara better right this ship, because it’s incredibly unbalanced when it comes to supporting characters.

Episode Strength: Great Episode Title. Provides a good summary. But I don’t recall anyone ever saying those words exactly. What’s up with that?
Episode Weakness: For the first time in three episodes, no characters copulated. The world’s definitely gone wrong.
WTF Moment:
Sophia is a zombie. Such an anticlimax. And a waste of six episodes. Fire the writers. Oh wait, that already happened. Can we hire at least one good one? My brother is available!