The Walking Dead: Say The Word 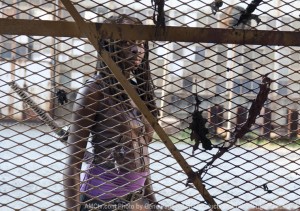 Who knew The Governor was such a good daddy? After brushing her hair, his young daughter spoiled the mood, so she was subdued with a straitjacket… and a bag placed over her head. That’ll teach her for turning undead. Now go sit in the time-out corner, until you learn your lesson!

Rick’s losing it. Lori’s still dead. I guess Carol died. Oh, well. And Daryl is suddenly annointed babysitter? Logically, a group leaves, searching for baby formula. Makes tons of sense! Michonne is busy sneaking around and being antisocial, while the others party. Who knew, all she needed was a little exercise?

The two leftover prisoners are working their way into Rick’s Gang, digging ditches, while Daryl grabs some fresh grub (just-killed opossum). I don’t think much of The Governor, but he has a good taste in music. I hope this isn’t the last time a blues tune is played. I love it!

Carl wonders, aloud, what to name the baby, and promptly goes down the list of all the fallen female characters on the show. Kinda touching. But Daryl gets the one-liner of the night, deciding to name the baby “Litle Ass Kicker.”

Normally, every episode is Rick-centric. This episode, Rick utters hardly a word, and somehow, the episode is incredibly strong, without him. I hope more episodes feature more action, less speaking as this (or even feature more secondary characters, before they’re killed off).

At the conclusion, we’re introduced to The Walking Dead’s version of The Thunderdome, which I actually enjoyed. But after killing tons of zombies, suddenly Andrea is a pacifist? Even if it’s in a controlled environment, seems a bit too forced, to have her hardened character immediately care for others. I’m hoping this character departure ends ASAP.