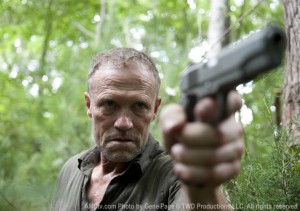 If Glenn is the soul of the show — which he is — then Michonne is the voice of reason. Even if she’s the silent-but-strong type.

I loved her message to the others, which was made up of zombie body parts. We haven’t seen too many messages left for other survivors, a la Left 4 Dead, but I hope to see more. I’m pulling for her to survive, but she won’t last long solo, in a group ensemble TV show. Maybe she’ll come across the prison soon. Speaking of which…

The mysterious caller spoke to Rick on the prison hotline, but remains anonymous. And somehow, this person is part of a group observing the prison. But are they simply playing games with Rick’s unstable mental health?

Andrea shall contribute to her new group, requesting to work the wall. Little Miss Katniss shall teach her to shoot a bow, and she’ll soon become Bad Ass Andrea From the Comics. But before all that can happen, Andrea I Wanna Sex You Up makes an appearance. BOO!

And aking a surprise appearance, this time in The Red Zone, a zombie herd!!!

At first I cheered for Merle’s survival. That was before he became The Governor’s lackey, and I hated him. But he’s a smart-ass, so I kinda like him. Now I hate him again. Oh, Merle. Pick a side, already. You’re giving me emotional whiplash.

Michonne arrives to The Prison!!!

Strength: Rick’s phonecall with his conscious. So very LOST of them.
Weakness: More questions revealed, than answers.
WTF Moment: Apparently, Merle needs no redemption. Not yet, that is.