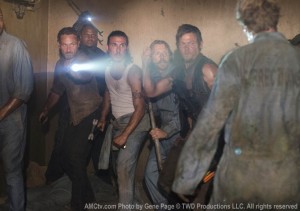 As far as cold openings go, Sick was intense.

Continuing directly after last week’s episode (Seed) left off, Rick chopped off 1/3 of Hershel’s leg after he was bitten (and would have made a lumberjack proud!). The gang managed to discover actual prisoners, who had been locked up in the prison’s cafeteria for around 10 months, and return safely to Cellblock C without any more undead incidents. But now, the prison has gotten too small for this 5-man band to live peacefully with Rick’s Gang. They all agree to help clear out the zed from another cellblock for The Others to live, in exchange Rick’s Gang gets half the cafeteria food for helping.

For the record, I like Big Tiny. He seems like a big ole teddy bear. Too bad he’s a coward. And dead.

Regardless, the tension-factor was incredible! Hershel may not survive Rick’s Paul Bunyan act and The Others team with Rick’s Gang in an uneasy alliance, fighting the undead. On top of it all, Carol feels the need for learning a new hobby: artsy knifework.

Rick is NOW a man! And veering close to becoming a cold-blooded killer. Three of The Others are now dead, and the surviving two are all to themselves. I expect drama from them! Oh, and I like the New and Improved Rick!

“Maybe there’s nothing to talk about, now.” Precisely. In your own words, Lori is a “bitch.”

Episode Strength: So much winning!
Episode Weakness: Hershel stalled the winning, with nary a word to say.
WTF Moment: Rick’s new nickname: The Butcher, for slicing up all who oppose him!

Notable Quotes:
– “There is no Army. There’s no government, no hospitals, no police. It’s all gone.”
– “As far as we can see, at least half the population’s been wiped out. Probably more.”
– “You pay, we play.”
– “I need experience. And we have plenty of cadavers.”
– “We don’t have no affiliation, what just happened.”
– “You better run.”