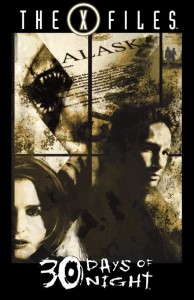 A vampire-crossover story involving The X-Files?

I’ve been a HUGE fan of The X-Files for all my life. I grew up watching the show every week, on FOX, and later on DVDs. The show suffered a lot in the waning years, probably should’ve been cancelled before the last three seasons aired. It got as close to a paranormal soap opera as possible, but yet I stuck with it, through thick and thin.

As the World Wide Web was gaining popularity, finding any kind of souvenirs based on the show was close to impossible. At some point, Topps released collectible cards related to each of the show’s TV seasons. And then there were comic books. As much as a fan I was of the TV show and later the movies, the comics were always one step down, in terms of likability or even being similar to the show. The comic books always seemed to make Mulder and Scully talk differently, act differently, not quite… right. But they always dealt with some sort of similar paranormal circumstance as the TV show.

This miniseries features a crossover storyline involving The X-Files and 30 Days of Night.

Strange happenings in Wainright, Alaska call on the FBI and Special Agents Mulder and Scully. As the last few days of sunlight end, just before a 24-hour of darkness begins, a new dawn of terror rises. Grisly beheadings with headless bodies hung 40-feet in the air haunt this small town, where the local Inuit legend connects a mysterious abandoned ice-cutting Arctic ship to the grisly deaths of local townspeople. It’s literally a race against time, as the agents attempt to get to solve the mystery before total darkness, and fight to stay alive.

As in all good stories of The X-Files, questions tend to lead to more questions and very few are answered. Many mysterious circumstances occur. Scully always acts by-the-book and for this mystery, Mulder is a bit muted. He bites his tongue while working with a mocking co-worker and even Russian agents working on the same case, but ultimately his wild assumptions turn out to be true.

Although they were never truly popular, I like collecting comic books featuring The X-Files… but I’ve never been a fan of the art. Despite the artists, it always felt a tad elementary in its depictions. Never too many details in the characterizations. I assumed, with this crossover, the artwork would be better. I was wrong. I also had hoped Mulder and Scully’s dialog would improve as well. I was only slightly impressed. Although the storyline was written by 30 Days of Night creator Steve Niles and oddly enough, musician Adam Jones (of Tool), the story was decent and didn’t seem to lag or stray from moving toward a conclusion. I guess the curiosity factor of doing a crossover was my main interest, despite the results. I’d say it was a moderately successful crossover. But it will probably be the last one, since The X-Files is no longer on the cusp of pop-culture, and that’s OK by me.

Strength: A one-of-a-kind crossover with two successful series!
Weakness: In the comics, Mulder and Scully never sound like their TV counterparts.
WTF Moment: There’s a man-turned-vampire, living in an Arctic cave, with no limbs, hiding the secret to life immortal.

Notable Quotes:
– “He’s hysterical — but he makes sense.”
– “Maybe we’re looking for a jaws-of-life wielding polar bear.”
– “The seas have many tall tales of monsters that have turned out to be fact.”
– “We’ve been on a lot of murders, Scully, and for the life of me I can’t recall one involving a 25-foot human popsicle.”