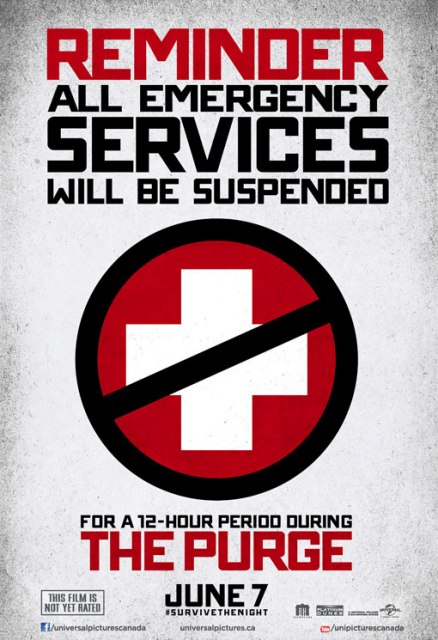 For some reason, I never was too sure what, exactly, The Purge was all about.

I couldn’t quite put my finger on it, but I strayed from catching it in the movie theater. Boy, I sure missed out.

Writer-Director James DeMonaco artfully crafts a futuristic tale that attempts to tame humanity. Unemployment is at 1% and crime is at an all-time low. A 12-hour period known as The Annual Purge is where society can legally release its aggression one night a year. Many participate for fun, while others simply lock themselves down in their fortress-like homes.

Ethan Hawke and Lena Headey’s family is one such nonviolent family. But leave it to their naively innocent (read: dumb) kid (Max Burkholder), who’s never witnessed violence before, to bring disaster into a once-peaceful house. During this time crunch, there’s also a home invader who’s known by the family and an inner war between family members break out when their security system fails.

There’s some incredibly tense cat-and-mouse moments inside the confined space, where you never know who’s actually the prey. Expect lots of action, even a social message regarding American rage that never gets fully explored.

The Purge was created by the Producers of Paranormal Activity and Sinister (both awesome franchises). I seem to follow all of these guys’ recent films. Upon watching the end credits, I ran across “Produced by Michael Bay.” Now, I realize what I was initially trying to stray from. Despite Bay, it’s a great film.

As with all good low-budget movies filmed by this group, this one made a TON of money and Universal and Blumhouse Productions are already working on a sequel. Hopefully, it’ll focus more on the bitchy housewife next door! She’s got it comin’ to her!

Strength: Great original storyline that doesn’t beat you over the head.
Weakness: The bitchy housewife next door is way too predictable.
WTF Moment: Getting beat-down by a cueball. That’s Strategy 101… but only if you’re near a pool table.

Notable Quotes:
– “Safe night.”
– “Please just let us Purge.”
– “The poor can’t protect themselves.”
– “Release the beast, boys. Let the killings commence.”
– “Things like this aren’t supposed to happen in our neighborhood.”
– “We are going to play the rest of this night out, in mother-fucking peace.”