Cosplayer of the Month: Liz Vickery 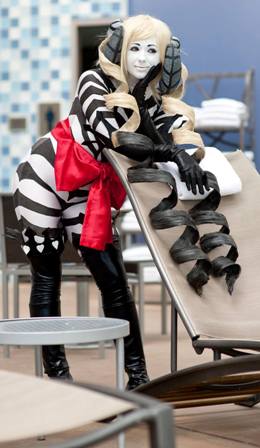 Per Matt:
When it comes to cosplayers, they can be found in practically every city, state and country around the world.

Liz Vickery, our Cosplayer of the Month, hails from the Southernmost city in the contiguous United States: Key West. She brings her flair for creating costumes to conventions all over the country. In our interview, we discuss weaving her love for anime and gaming into her characters, becoming an undead creature for the Zombie Bike Ride and fundraising to pay off her sick kitty’s medical bills.

How did you initially get into cosplaying?
– “It all started back in 2006. My friends were doing a One Piece cosplay group for Metrocon. As a fan of the show, I totally accepted, when they asked. Chopper, being the adorable companion he is, was an instant choice. I didn’t really understand what cosplaying was, at first. After experiencing it, I fell in love.”

“Here I was, surrounded by like-minded people. People who loved the same things I did. It was so easy just to walk up and start a conversation with almost anyone. I loved it. Before college, I knew only a few people who shared the same interests as me, and even in college, I still had a small group. It was the first time I was really surrounded by thousands of my fellow nerds, geeks and freaks. I felt welcomed instantly, more so than anywhere else. No one judged me or called me names. If anything, I got tennis elbow from the multitude of high fives. It didn’t matter if I was a woman, a cosplayer, a gamer, an anime enthusiast. All that mattered was that I was accepted for me. There was no one questioning me or what I did. It was my personal safe haven for everything I hold dear and cherish day to day.”

“How could someone not fall in love so quickly?”

How long have you been cosplaying?
– “On and off since 2006. College and stuff was the main reason I didn’t do it more. I plan on it becoming more of a full-time year-round hobby, now that I’ve graduated college and started my career. I also really want to start competing, because a life without competition is rather dull.” 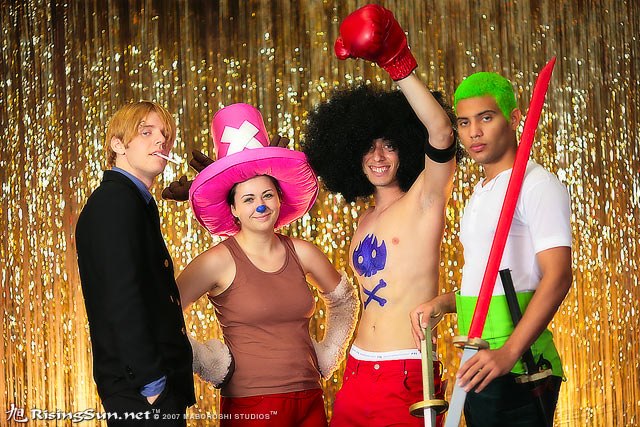 What was your first cosplay costume?
– “Tony Tony Chopper from One Piece. I remember the night before, we were all going to cosplay together. I stayed up all night, hand sewing the arms and leggings for Chopper. I crashed so hard when I got home. We were actually one judge’s favorite and our prize was this awful DVD called, ‘Sars Wars: Bangkok Zombie Crisis.’ Just getting recognition was such an amazing feeling.”

What’s the story behind your company’s name, Leaping Lizard Cosplay?
– “Well, there is a silly backstory to it. I must admit I was a weird child. My name is Liz, but in my childhood everyone called me Lizard. I was fascinated with tiny lizards and I would run around and catch them, pretty much all day, every day. I had a habit of making them latch onto me. This included my ears, my nose, my mouth, and more commonly, my finger tips. I would catch multiple lizards at a time and let them hang on me like jewelry. Thus, the nickname Lizard was born. I used to prank my mom with the tiny reptiles, and she started calling me Lizzy Lizard. My family on my father’s side still refers to me as that, from time to time.”

“Well, you are probably thinking at this point, where does the Leaping come in? That comes from the awesome Atlus hit Demon’s Souls. Being a gamer my whole life, I’ve had a ton of favorites. After a while, a lot of gaming seemed rather easy to me. Then Demon’s Souls came along and rocked my world. I became obsessed with it. One NPC in particular hit a soft spot with me. The sarcastically jolly character Biorr of the Twin Fangs. I would quote him all the time with my fellow Demon’s Souls friends.”

“In the final level of the first stage (1-4), you come across a giant blue dragon. Now, the dragons in Demon’s Souls pretty much instill several negative emotions in you and causes you to say very colorful vocabulary. The final showdown with this specific dragon involves the great Biorr! When you run to the area you see Biorr and he yells out to you, ‘Leave that Leaping Lizard to me!’ Mind you, he gets completely destroyed, if you don’t save him. It was just so funny, that it stuck. It was my favorite quote of the entire game.”

“When it came time to try and pick a cosplay name, I know I didn’t want to use my personal name. Having lizards be a recurring theme in my life, I knew it would have to incorporate them somehow. A hop and a skip later, Leaping Lizard Cosplay was born.”

How long has Leaping Lizard Cosplay been a company?
– “I just officially opened my store in October. The main reason is because I’m trying to raise funds for my sick kitty. Now that is has kicked off, I plan on adding additional things to the store, to fundraise first and foremost for Sparkle (my sick kitty), but once her medical bills are taken care of, I plan on making cosplay accessories, props, and sell my prints to fund my cosplays and conventions.” 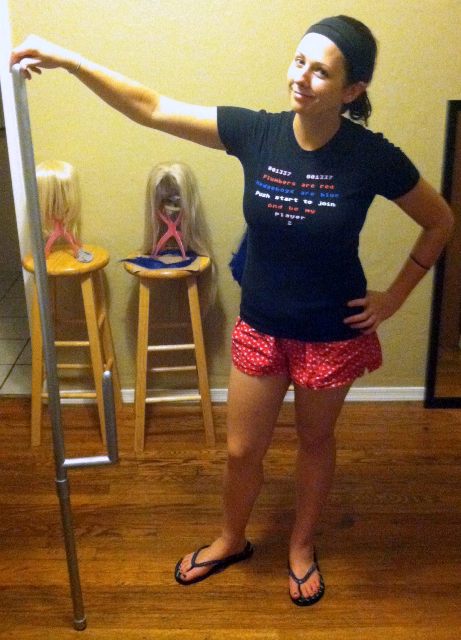 Do you make costumes for other people?
– “I have, several times in the past. It does take a considerable amount of time and work. Will I do cosplay commissions for others again? Probably not, but I do plan on making accessories and props, for those who would like them.”

What’s your favorite character to cosplay?
– “A favorite is hard to choose. My favorite type of characters to cosplay would be characters that are just goofy. I consider myself a very silly person, so I really enjoy playing around. Chopper being a favorite of mine, it’s easy to say (despite how hokey I look). It was a lot of fun. Wii Fit Trainer was too.” 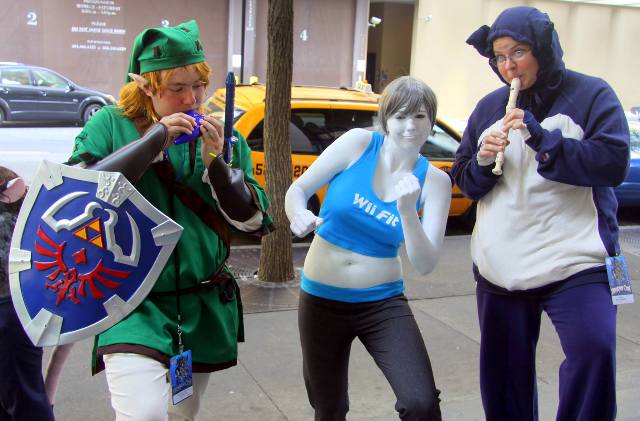 What kind of advice would you give to beginning cosplayers?
– “TIME MANAGEMENT!!! Oh man, it’s so crucial. Set out a plan and goal. You don’t train for a marathon the night before one. Also, learn the art of Google-Fu. If there is something you are trying to make, odds are that it has been done before. Oh, and if you have any questions, feel free to ask me. I love helping out other cosplayers. I love following other cosplayers as well and I regularly engage and discuss plans and ideas with them. Some are very good at getting back to you, while others have such a large following, you just cannot get in touch with them. It’s good not to take it personal, either. Asking Yaya Han or Jessica Nigri a question online is probably not the best approach. There are tons of forums where you can post and other cosplayers will be there to help you out, as well.”

Who was the black-and-white character you were portraying at Dragon Con?
– “That was Catherine from the Atlus video game Catherine. Specifically her true Succubus form you get to see when you beat the True Cheater ending. I chose her because she’s so devious, sexy and sly. Several traits I would not say I possess, but admire. The ending was hysterical and I felt she was someone I needed to bring to life.”

How many conventions do you usually attend each year?
– “For the past couple of years, it’s only been one or two. The goal is to turn that into about eight to 10 a year, starting in 2015, with one new cosplay being presented at each convention. As it stands, with the small amount of conventions I attend, it’s turned into a completely new lineup each convention.”

Are there many cosplaying events taking place in Key West?
– “Well, not cosplaying so much as costuming. Lol… We have a yearly festival called Fantasy Fest, I highly recommend it on everyone’s bucket list. There are costume-themed parties and contests every day and big events such as the Zombie Bike Ride. Here is a photo of me from this past year Zombie Bike ride.” 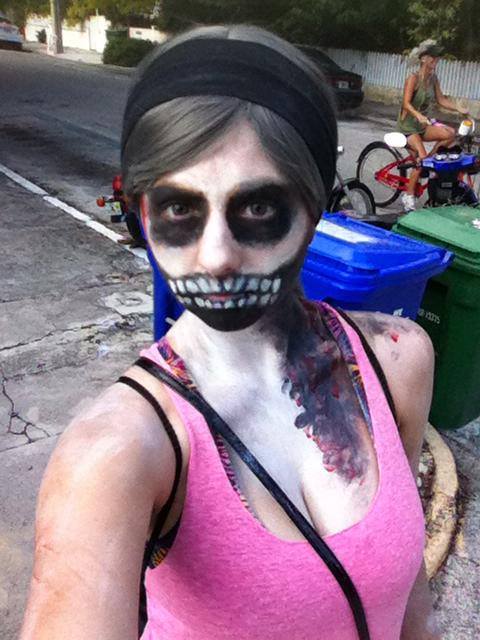 Since you live in the Southernmost city of the country, is it difficult traveling to different conventions?
– “It’s not cheap, that is a fact. Flying in and out of Key West will cost you a pretty penny. I try to combine driving and flying to get where I need to go.”

What upcoming conventions will you be attending?
– “I am attending Metrocon in Tampa Bay, Florida, Florida Supercon in Miami, Florida and Dragon Con in Atlanta, Georgia. Anime Weekend Atlanta in Georgia and New York Comic Con are still in the air, at the moment.”

Is there anything else you’d like to add?
– “First, thank you, Zombies In My Blog for interviewing me. I feel super honored. Your blog is awesome. And to those reading, Thank you for reading my story!”