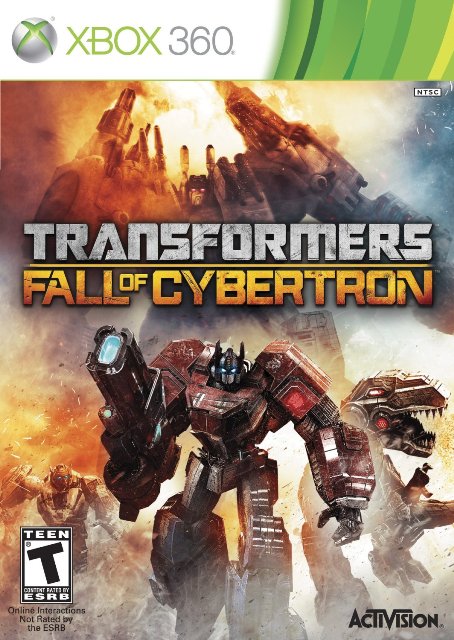 Per Matt
With Transformers: Age of Extinction making a killing at the box office, I realized I’d forgotten to post my review to all-time favorite Transformers-related video game. Thankfully, this one has absolutely no relation to Michael Bay!

Transformers: Fall of Cybertron is a third-person shooter that coincidentally also features Optimus Prime and Grimlock on its cover (just like the movie poster).

As a Child of the ’80s, The Transformers were my absolute favorite comics, toys and cartoons. Sentient factions of robots that abandoned their home planet in order to survive (and continue their battles) on a new world. But why did they leave their home? High Moon Studios and Hasbro attempt to retcon the franchise with this rebooted story and it’s a good one.

This is a sequel to Transformers: War For Cybertron. The Autobots and the Decepticons are still at each other’s robotic necks and won’t stop until their rivals are defeated. Throughout the battles, Cybertron has become unstable and unlivable. Gearing up their ship, The Ark, will the Autobots escape and survive their intergalactic expedition? Or will the Decepticons succeed with their sneak attack and destroy them all?

As for overall gameplay, Fall of Cybertron is less difficult than its predecessor. I really like the character molds this time around, which are slightly modified from the past game. The player has more variety in choosing their playable characters, as well. The colors are vivid and controls are great. I really enjoyed the game, which is why I stretched it out, making it last as long as possible.

Comparing the two games, I liked this game more than War for Cybertron, with the exception of selectable checkpoints (which Fall does not have), but it does have better graphics and storyline (although both games have extinct online communities). The multiplayer component for both games was bad. Both games were a grind to upgrade XP and for some reason there was no campaign co-op option. What happened there?

It took a little longer than I’d prefer to get to the Decepticon side, but playing as Bruticus was epic. In fact, after reaching the end of Chapter VIII, I backtracked just to have more smashing fun. I wish you could play as other Gestalts, including (but not limited to) Superion, Defensor, Computron, Abominus, but most importantly Devastator, King Poseidon and Predaking.

Some of the voice actors resemble the character’s G1 origins, others… not so much. Peter Cullen reprises his role as Optimus Prime (which is great)… on the other hand, Jetfire is British this time around, for no true reason. Seems odd for a robot to have an Earth-bound accent from a planet they haven’t visited yet. Oh, well. Also, some of the character’s names are changed this time around for an origin story, due to copyright issues. Poor Slag, er, I mean Slug. Sounds much better, right?

Overall, Fall of Cybertron has a fun storyline, one which I’d love to see get another G1 sequel… too bad Transformers: Rise of the Dark Spark was all we got.

Strength: Great, epic Transformers storyline.
Weakness: No campaign co-op is a bummer.
WTF Moment: The Dinobots are playable… but Sludge — my favorite — was killed off in this storyline. Sludge gets no respect.

Notable Quotes:
– “Jerks on every channel.”
– “Soundwave superior; Autobots inferior.”
– “Megatron’s will is the fate of Cybertron.”
– “Soundwave, initiate the Nemesis protocol.”
– “I hear this is where all the idiots hang out.”
– “This bridge is really starting to grind my gears.”
– “You cut through them guys like Berilium bologna.”
– “First we crack the shell. Then we crack the nuts inside.
– “It is doubtful that you will survive Starscream’s leadership.”
– “What’s got two thumbs and no apparent capacity for logic? This guy.”