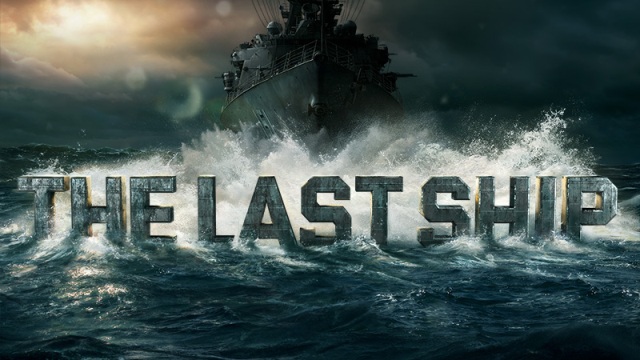 July is here and various TV networks are embarking into their summer schedules. The Last Ship has arrived at its port of call on TNT and it offers some hope to cure the summertime blues.

A mysterious outbreak appears in Egypt and has quickly killed every person it infects. Birds seem to be the primary virus carriers, quickly leading to a global pandemic, where 80 percent of the global population is dying. But there is some hope left for the human race…

A battleship filled with 217 men and women, on a top-secret mission to the Arctic Circle look for a cure. Little do they know, during their radio blackout, the majority of the world’s population has been wiped out. The only outsiders on this ship are a small team of virologists who haven’t quite earned the trust of the crew.

When the soldiers man their battle stations during a shootout with the Russians on the North Pole, the race for a cure gets real very quickly.

The tagline, alone, is enough to get me interested: Find the cure, save the world.

In the series premiere episode, Director Jonathan Mostow creates lots of conflict on the battleship and offers plenty of dizzy camera angles. The pilot looks expensive and no lens flare was spared (which is very annoying). The characters seem to take a backseat to the evolving action — which isn’t a complaint — but I haven’t gotten a chance to learn any of the character’s names, with the exception of Dr. Rachel Scott (Rhona Mitra) and CO Tom Chandler (Eric Dane).

Needing a bad guy in the series, The Last Ship offers a Soviet spy onboard and it feels like 24 on a boat. Here’s to hoping it becomes a little more.

In the following episode, Welcome to Gitmo, the audience learns bits and pieces about a few characters at a time. It’s good that the show doesn’t force-feeding the audience into information overload, but it could offer a little more character study per episode. So far, we don’t really know these people, let alone their names.

At the end of the world, trust is key and in short supply. Running out of food, supplies and fuel, the crew often has to deal with dire situations and hope to quickly solve them. Working together, this ragtag team could get the job done and might actually save the world. The Last Ship has some great action scenes and a good bit of drama. I hope they discover some more sea-bound or underground survivors with a different perspective on riding out the pandemic. That could be really interesting.

I’m not one to jump into new series very easily, but this one has the makings of a great horror movie, without the gore.

“It’s a new world, now. There’s no good guys and bad guys. It doesn’t matter which side we thought we were on. We’re all just trying to survive.”

Those poignant words could also symbolize the fate of this TV series. I hope they get a chance to drop anchor and survive to tell their tale. Being a summer series, I hope it’s not already dead in the water.

Strength: A horrific outbreak creates nonstop drama.
Weakness: Not much character study in the first two episodes.
WTF Moment: Using rocket launchers on snow mobiles? What is this, G.I. Joe? I need more!

Notable Quotes:
– “Stay frosty.”
– “She’s the only hope we’ve got.”
– “I never thought it would spread so fast.”
– “Are you telling me the whole world is dying and they sent me two people to save it?”
– “I’m still the captain of this ship. I’ve laid out our mission, I expect you to fall in line.”