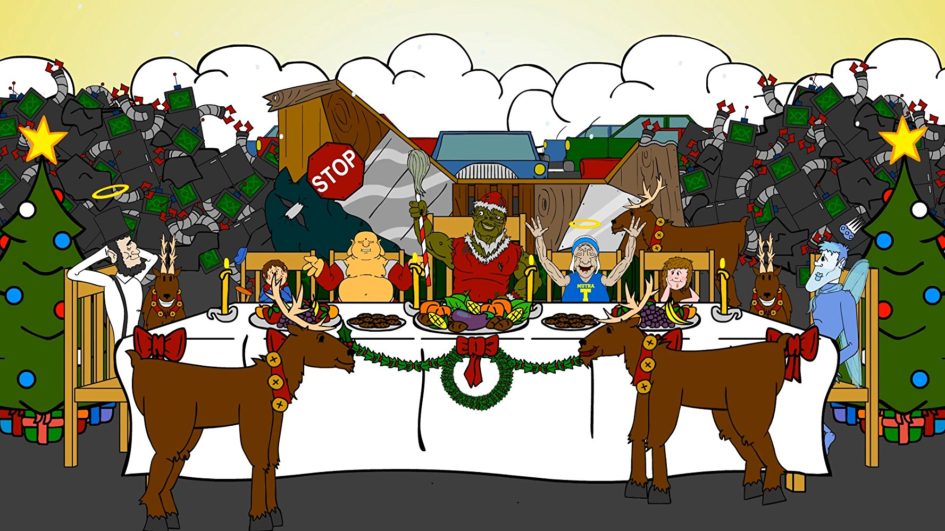 Gather ‘round, kiddies. It’s time to tell you a tale of Christmas cheer, as only the fine folks at Troma could.

I mean, seriously, did you think I was going to let you go through the holiday season without sharing the heartwarming joy, laughter and anti-commercialist murder spree that is Troma’s A Very Troma Christmas? If so, you clearly don’t know me very well. So, let’s all take a moment to focus on the important things in life, shall we? Family, friends and a group of disparate all stars of myth and history join forces with the Toxic Avenger to kick the shit out of holiday consumerism. Sit back and enjoy, kiddies, ’cause It’s a Tromaful Life. 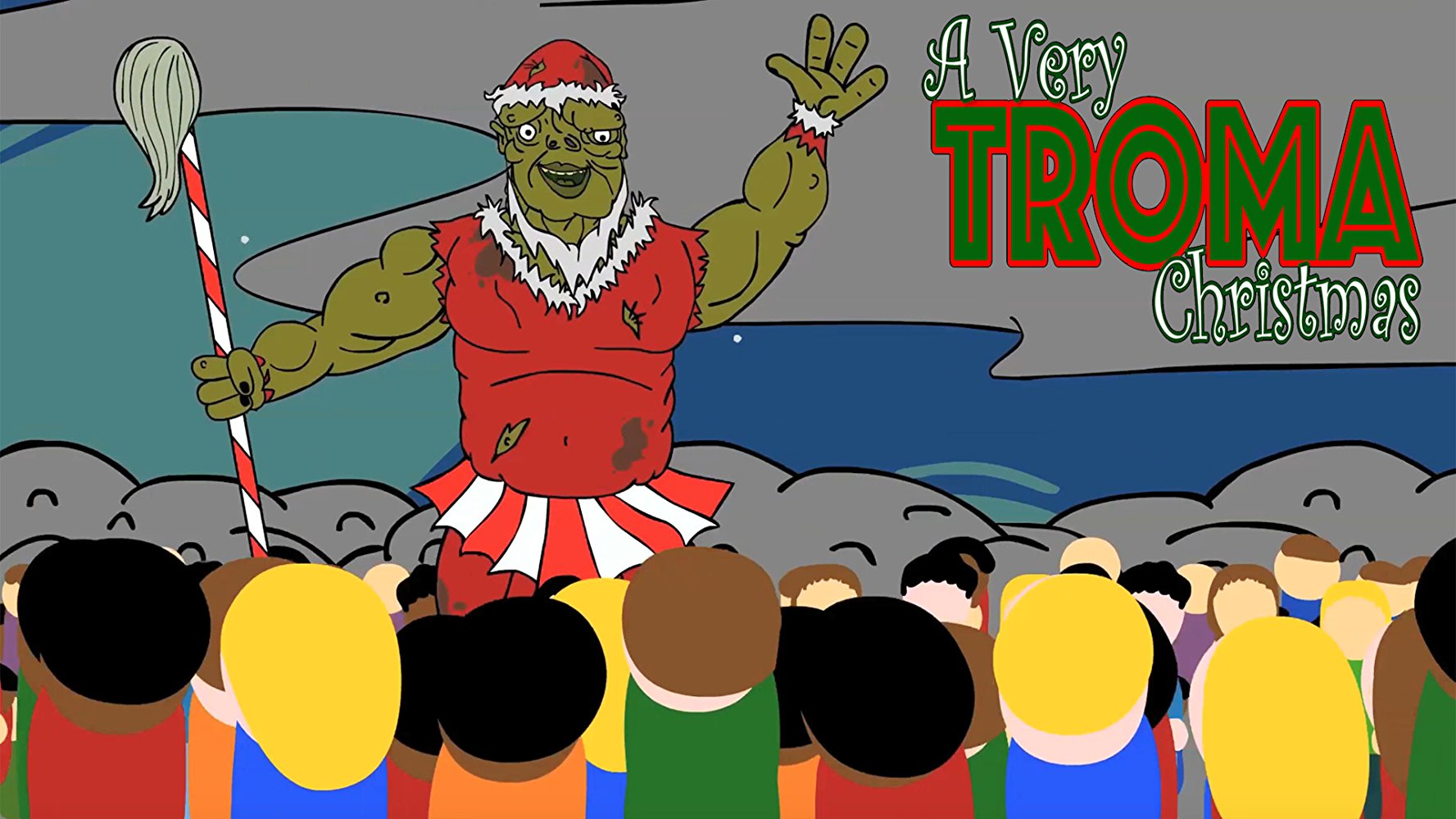 Christmas has come to Tromaville and with it, a non-stop orgy of greed and commercialism as big-box stores rob blind the citizens and steal the joy of the season. Toxie and friends (The Tooth Fairy, Mother Teresa, Buddha and Abe Lincoln) aren’t going to stand for it as the recognizably off-brand megastores rape the joy of the holidays for their own personal gain. The all-star team descends from heaven, trying to reason with the brainwashed people of Tromaville and the evil conglomeration of overlords ruling them. When that doesn’t work, they switch to other tactics, like a star-studded concert featuring familiar but slightly off-brand online celebrities trying to to break people free of the seemingly hypnotic hold of their shopping mania. Of course, this doesn’t work either, so Toxie and the team do what they do best: Fuck shit up!

In a deluge of crudely animated — and just crude — assaults full of gore, defecation and gay angel armies, the Toxic Avenger as Santa Claus and his mystical companions save the day, like only they can.

Like so much that Troma produces and acquires alike, this is film for the sake of film. Or in this case, animation. It isn’t meant to be a blockbuster, but rather an artistic statement about the most beloved season of all and the way it’s been corrupted by non-stop, on-demand greed and materialism. I mean, don’t get me wrong, a reindeer shitting out a bomb onto a bunch of killer robots is just icing on the cake and one of the many scatalogical, seemingly random moments of the almost 12-minute long animated short. Troma’s motto/business model is apparent in this short: Just make the damn movie! It’s definitely a good lead in to some of their amazing Troma Now! content, including 12 Slays of Christmas (a horror anthology film) and Hectic Knife. 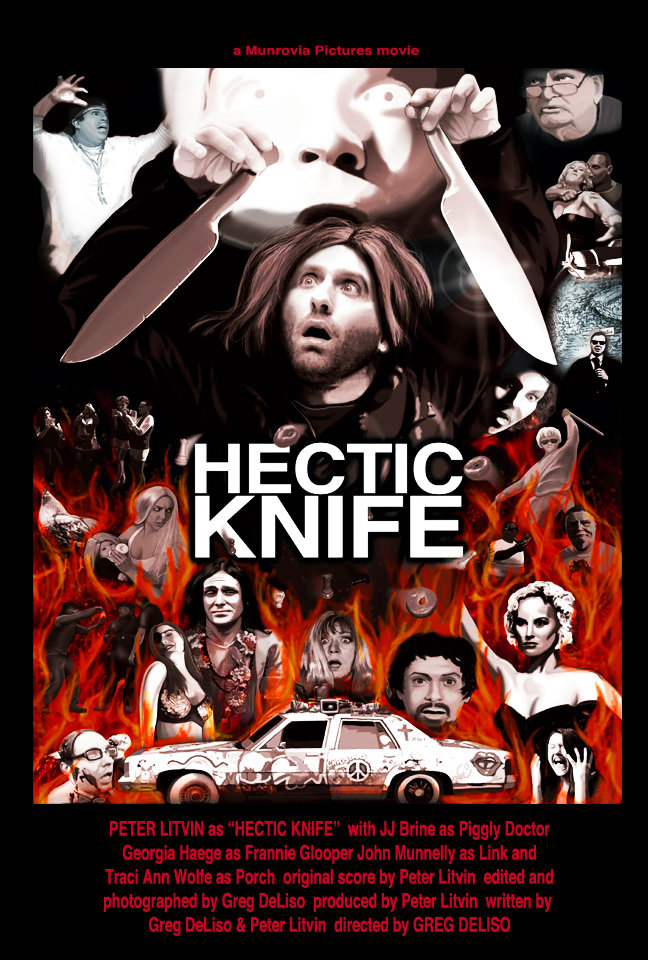 Speaking of Hectic Knife and Christmas, if you haven’t given this movie a shot on Troma Now! you’re definitely missing out. It’s a bizarre, black-and-white film shot over the course of five years by Greg DeLiso and Peter Litvin. The story of a knife-wielding vigilante in the grips of an existential crisis, while the evil Piggly Doctor tries to take over the world is a super-low budget, truly independent experience. The writing and dialogue throughout feels retroscripted, almost improvised as if this film came from an alternate universe in a Rick and Morty episode, making it a bit ahead of its time. Despite being released in 2016, Hectic knife began production in 2010 and has some wonderfully dated looking moments. The idea behind the movie is fairly original, with a superhero/vigilante on the brink of burnout in a city that continues to be plagued by crime and corruption, no matter how hard he works to free it. Hectic Knife satirizes a lot of the more ridiculous comic book aspects of heroes, as we often find the characters stating the obvious, as if to emphasize to themselves what is happening.

So, boys and girls, gather ‘round the modem and log onto Troma Now! and enjoy A Very Troma Christmas, 12 Slays of Christmas and Hectic Knife and have your own Jimmy Stewart-style epiphany that really is a Tromaful life.