Once Upon a Time at Christmas is kinda like Hallmark or Lifetime decided to jump into the subgenre of Christmas horror films and decided to throw in a dash of Fargo-type police story. Or was this supposed to be a horror-comedy Christmas film and I didn’t quite recognize the sarcasm? To be honest, I’m not sure exactly what Director Paul Tanter was going for.

It’s Christmastime and two killers are on the loose dressed as Santa and Mrs. Claus. Mrs. Claus (Sayla de Goede) carries a baseball bat and looks like a bad Harley Quinn cosplay while Santa (Simon Phillips) wields an axe. They are killing people in the 12 days leading up to Christmas following along with the holiday favorite as inspiration. The Sheriff (Barry Kennedy) is determined to find these eccentric murderers, despite his drinking problem and the mayor standing in his way, who’s desperate for the town’s festivities to continue. Meanwhile, Mr. and Mrs. Claus are picking off the friends of local teenager, Jennifer (Laurel Brady).

The outline I have just given of the story makes far — and I mean far — more sense than the actual film. The storyline is just completely nonsensical and overreaches for the type of film the director was trying to make. It’s like he tried to throw together a slasher and Fargo-type murder mystery, where The Joker and Harley make cameos with inspiration from The Shining. The writing is painful. It would be funny if it wasn’t so obviously not written to be funny. The special effects are on a level of so bad, I was actually stunned and I would have turned the film off, had I not been reviewing it. There is an actual scene where plastic fingers are used for chopped-off fingers and no attempt is given to even make them look halfway real. The best thing I can say about this film is, the camera is always in focus and you can always clearly hear what the actors are saying. Kudos to the sound guy and cinematographer, I guess. 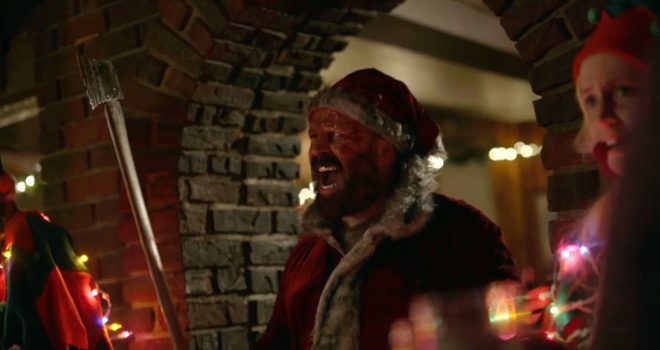 My advice to the director is to pick a direction for a film and to not steal characters from comic books. The inspiration for this film was very obvious, and to be honest, Suicide Squad is the last place I’d be looking for film’s inspiration, anyway. Good Christmas horror films or even just horror films inspired by the holidays are a delicate balance to achieve. The best ones play on the idea of being alone, as other people have left for the holidays. Try more Black Christmas and less Batman.

For those looking for a great Christmas horror film, I recommend A Christmas Horror Story or perhaps Better Watch Out. I give Once Upon A Time at Christmas two stars for decent camera work that does show while this film isn’t the best effort for both the director or cinematographer, they are capable of better work.

Once upon A Time at Christmas is now available on demand.