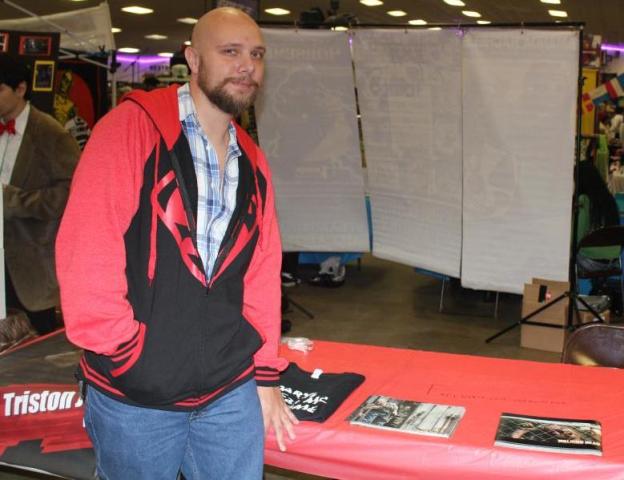 What do you say to the guy who killed fan-favorite, T-Dog, of The Walking Dead?

As a featured Walker, Triston Johnson has appeared on The Walking Dead in 12 different episodes. I recently caught up with him at Pensacola Para Con and discussed his featured roles, killing T-Dog and appearing in a crazy Youtube video as well!

You’ve played multiple Walkers from 12 different episodes. How would I recognize you?
– “Most people know me from the one in Season Two, where they find Sophia in the barn. When Shane unlocks the barn, I was the one to open the door: First one out, first one to get shot in the head.”

“I was the one who bit T-Dog in Season Three. If anyone’s watched the bad lip-reading video on Youtube, I’m in that one as well, when they’re up against the fence. The one who’s going, ‘YEAH! YEAH!’ That was me.”

Not many actors get featured more than once on the show. How did that happen?
– “Basically, there was just a casting call. My friends actually shot me an email that said, ‘The Walking Dead was looking for emaciated people, you fit perfectly.’ I submitted, sent them some photos. They emailed me back and said I had to go to Zombie School. I went through Zombie School — it was me and 50 other people. Basically, what that is, Greg Nicotero sits you down, walks you through how he wants everyone to walk. He’ll do different simulations with you. ‘Walk across the room and I’ll throw a chair across,’ and I’ll have to react as a Walker and stuff like that. He just likes to see how you work. I did that and I worked Seasons Two and Three since.”

When did you attend Zombie School?
– “It was before Season Two. My very first episode was the Season Two Season Premiere, on the highway.” 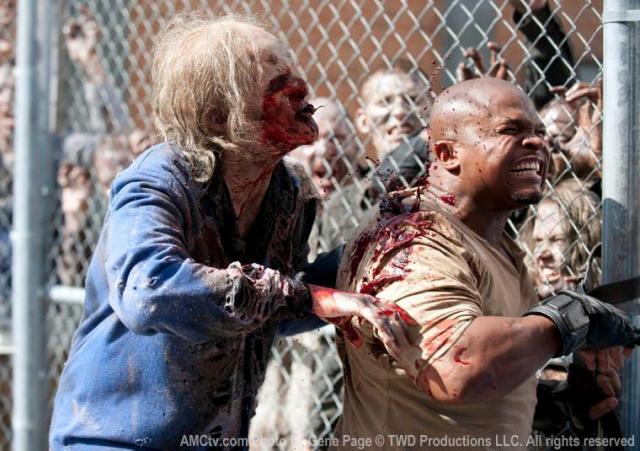 Give me the behind-the-scenes info on biting T-Dog. What’s the story, there?
– “It was real cool. When you go to do it, I don’t want to hurt him, but the whole time he’s like, ‘Give it to me. Give it to me.’ It took, like, eight or nine takes and I’m basically jumping on the dude, biting him. He wants that real hero send-off, because this is his moment. I realized that. It took a couple of takes, but I finally got it.”

Did you have any interaction with IronE Singleton before that, to see how he wanted to go out?
– “Greg Nicotero basically told me how it was going down, then IronE and I talked about it. We decided it would be good to get on him.”

Whereabouts can we find you in Season Three?
– “Running around in the hallways of the prison and in the field, as well, up against the fence, when they’re poking Zombies in the eyes. I’m in some of those shots.”

What are a few ways you’ve died?
– “I’ve been shot, I’ve been stabbed, stick in the eye, all kinds of stuff.”

Is there any chance you’ll be returning?
– “I will not be returning for Season Four because I’m working on Revolution on NBC.”

What other projects have you worked on, after The Walking Dead?
– “I did Vampire Diaries, Teen Wolf… I’ve got a couple of movies coming out next year. There’s one I did with Kevin Hart and Ice Cube, called Ride Along. I play a cop on that. And then the new Arnold Shwarzenegger movie filmed in Atlanta as well. When we filmed it, it was called Ten, but they’ve since changed the name to Sabotage.”