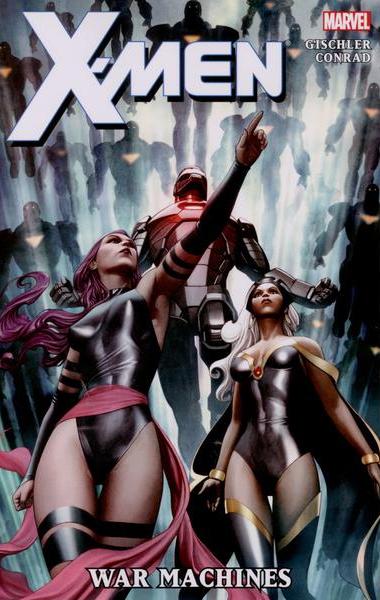 Picking up X-Men: War Machines, I realize it’s been a LONG time since I’ve picked up an X title.

In this trade paperback, a border dispute between two former Soviet-bloc nations leads Puternicstan to purchase a trio of Sentinels, hoping for protection and independence, not knowing (or caring) they are mutant-hunting machines.

Storm leads a small X-Men team into Eastern Europe to extract Domino and destroy the Sentinels, but gets denied entry into the country by War Machine, who represents U.S. government and NATO interests. Rhodey is amped up, making the first strike, but after witnessing an air-space violation by a neighboring country that could easily spark World War III, the superheroes drop their differences and work together to diffuse the situation.

War Machines is a four-issue storyline that leans heavily on an anti-war theme. Is it possible to have an Earth-shattering weapon, hoping that possession alone would be a deterrent to World War III, not wanting to start a battle? It’s a difficult tightrope to walk in hopes of independence and newfound wealth.

Also included in War Machines is the bonus 1963 story, detailing the origins of those mutant-hunting robots in Among Us Stalk …the Sentinels! I really enjoyed discovering this storyline. Storyline sketches and alternate comic covers are included, as well.

It’s great to see a storyline focusing on Rhodey and his inclusion with the X-Men was fun to read. I would love to explore more Sentinel stories and uncover Jubilee’s sanguine infatuation, but only if it’s in a trade paperback collection!

I hope to discover more hidden gems like War Machines, in the near future!

Notable Quotes:
– “So it’ll be us versus a Sentinel? Cool.”
– “Let’s mount up and kick some giant robot ass.”
– “Good fight. I don’t suppose it’s Miller time now.”
– “I don’t think I’m in the mood to be arrested today.”
– “Sorry about what’s going to happen to your face now.”
– “My mental power is useless against a mechanical brain!”
– “Will somebody tell this overgrown toaster I’m not a mutant?”
– “It is not really convenient for me to be apprehended right now.”
– “We will draw our borders in blood — the only sort of ink that never fades.”
– “How much cream and sugar did you put into this? It’s coffee, not cake batter.”