Ever since the Marvel Cinematic Universe was launched in 2008 with Iron Man, it has been almost impossible to find something wrong or unlikable about the series of films. With the likes of Captain America, Black Widow and Hulk, the deck was stacked for success. Marvel even brought in the Guardians of the Galaxy, which was not one of the more popular, well-known titles, and made it work amazingly well. Through the first three phases, the Marvel Cinematic Universe really seemed to do no wrong.

However, Phase 4 of the MCU has not been all that exciting. Taking place after the events of Avengers: Endgame, the latest set of film and TV properties have had low points not seen in the previous phases. Wandavision was a critical success and was a great prelude to what is to come. And Loki set up the new multiverse very well. But The Falcon and the Winter Soldier seemed to falter.

Maybe it was due to the need to change the storyline from a biological weapon to something else (to be a little more sensitive to the pandemic and not come off as trying to profit from it). The show lost me halfway through, and never got me back. Black Widow takes place back in Phase 2, so technically it is not part of the new batch. Shang-Chi was good but didn’t strike a home run. It just feels like all of this was setting up a lackluster series of mediocre movies. Not great films, but not complete stinkers.

Now we have Eternals.

Eternals is the story of a race of immortal superhumans created by the Celestials. Seven thousand years ago, the Celestials sent the Eternals to Earth to protect the planet from an alien race called the Deviants. The superhuman powers possessed by the Eternals gave way to them being viewed as mythological gods to the primitive people of the planet. The team was able to cleanse Earth of the Deviants, but the wars waged by mankind over the ages caused rifts within the Eternals, leading them to break up, going their separate ways.

After the events of Avengers: Endgame, Ikaris (Richard Madden) seeks out Sersi (Gemma Chan) and Sprite (Lia McHugh) on the suggestion of Ajak (Salma Hayek), after it is discovered the Deviants were returning from slumber in the polar ice caps. Ikaris, Sersi and Sprite were able to reunite with the remaining Eternals: Phastos (Brian Tyree Henry), Kingo (Kumail Nanjiani), Makkari (Lauren Ridloff), Druig (Barry Keoghan), Gilgamesh (Don Lee) and Thena (Angelina Jolie). As the team prepares for the battle with the Deviants, secrets are revealed and the newfound unity of the super squad is put to the test. 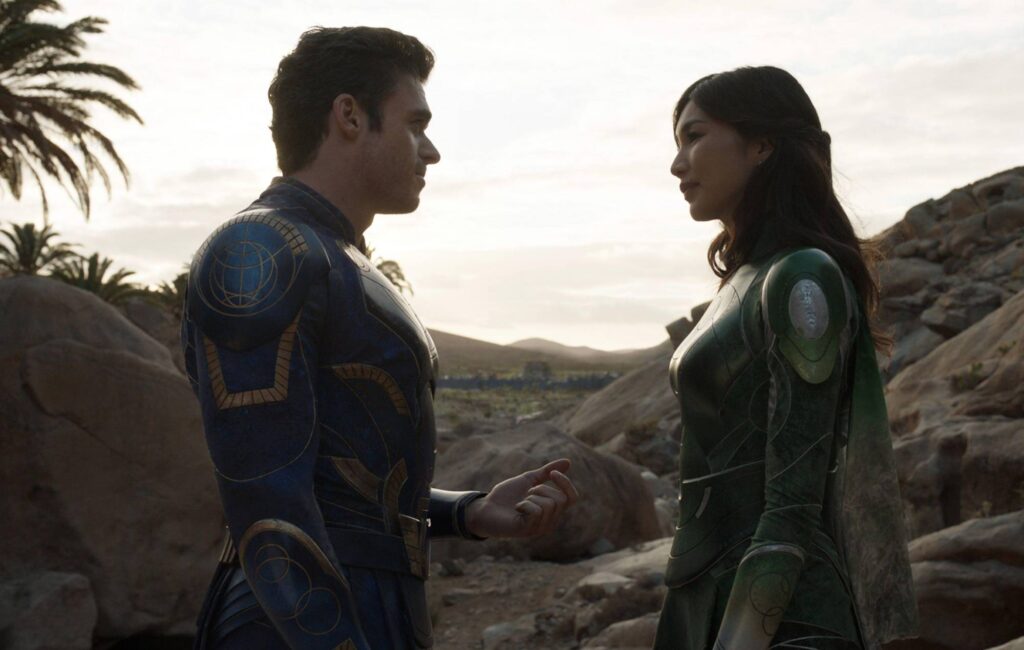 I found Eternals lacking in so many areas. First off, let’s talk about the special effects. While most look good, there are a few times that I could tell something was completely computer-generated. Normally, this does not happen in MCU films. I don’t believe I have ever had a time where I watched anything from Phases 1-3 and said, “That just looks so fake.” But here, I felt it a lot of times, especially with how the Deviants interacted with the “real world.”

The Uncanny Valley effect was in full effect here. Also, the ship used by the Eternals looked completely void of character. In my opinion, their ship looked more like a placeholder that was supposed to be updated in post-production, but everyone forgot to do something with it. So, we end up with a flying rectangle. The Borg cubes in Star Trek had far more character than this.

Eternals spent a lot of time fleshing out the characters. Normally, I love this, as it gives you a chance to really get to know them. But with so many characters to work with, it was tiring to see. Too much time was spent developing the characters that the whole movie suffered. Think about it: What if we had to get the backstory of every member of the Avengers in one film?

Eternals would have been better having separate films or TV shows about the individual characters (or smaller groups) than trying to stuff it all into this one movie. The run time is 156 minutes, and it starts to feel longer, which is not a good thing. Backstory fatigue is a real problem for Eternals.

All in all, Eternals is not a bad movie, but it is far from a great film. I give it two out of five stars, which is the lowest score I have ever given an MCU film. Too many characters to flesh out. Too little of a plot. Too much time traveling (to give backstory). And too much boring dialogue. It’s an action film where the action is secondary.

Wait for Eternals to hit a streaming service. It’s OK to not like Eternals. We don’t have to love everything spoon-fed to us. Calling out problems leads to fixes, and fixes lead to better films. I hope Marvel learns from this and makes the next installment all the better!