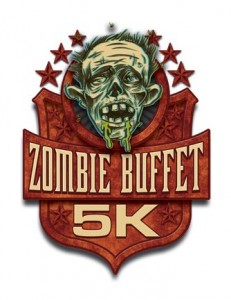 Per My Brother:
The Zombie 5k Buffet is a unique race. Already in its second year, this 5k race allows runners to sign up in two different categories: runner or zombie. But it’s a little more complex than that. This race includes people who want to run obstacle courses and people who want to run (or stumble) in character as zombies. This race was formed from an idea at a brainstorming session by Ritchie Morrison, Jason May, Brandon May, and Wes May. This weekend, on Saturday October 27th, Nashville will host the final 5k of the year, which will offer some surprises to those who attended last year’s competition. I spoke with Event Creator Ritchie Morrison by phone for an in-depth peek at this year’s race.

How did you get the idea for a zombie obstacle course?
– “Wes is an avid comic book reader, and I think it was right as the first season of The Walking Dead was airing on AMC. I might be a little bit fuzzy on the exact day. We were watching The Walking Dead one night. One of the founders said, ‘You know, it would be fun to do a 5k.’ We were all kind of in agreement. We all have a specific skill set that would allow us to do it. Myself, I’ve been advertising for 25 years. The stars aligned. We all realized we could do it, if we wanted to do it. From there, we talked about what we might do, and it just grew out of this little brainstorming session.”

Had you heard about any other races involving zombies before your brainstorming session?
– “Right as we started doing it, we heard that there was another race. We had no idea how big that other race was. We started researching to see if there was anything like our race out there. We found lots of Zombie Walks, and races where you ran as zombies, but nothing quite like our race. The fun of doing this is running from zombies. Then, of course, we found the other race, Run For Your Life, but it was their first year, too. So, we were all, neck and neck, going out.

Can you describe your 5k race a little bit?
– “What makes our 5k different is you can sign up as a runner or a zombie. If you choose to be a runner, you get two football flags. During the course of the 5k, there are zombies on the course. We have Berserker zombies and Romero zombies. Berserker zombies chase you. Romeros kind of stagger around the course. We felt like we could include all athletic levels if we did it this way. There are Romero zombies that will try to reach out and grab a flag, if you run too close to them, but then you have Berserkers that will actually try to chase you down and get your flag. We want to make sure that everyone gets a fair shot, whatever their activity level. The runners who survive will get prizes for the best times in each division. And the zombies who take the most flags will get prizes.”

What makes your race different from the others?
“Most of all, what sets us apart from the other races, is not all of them have a big charity angle. That’s something we felt really strongly about. In Nashville, one of our charities is Nashville Rescue Mission, which is an education program helping homeless people get their GEDs and get a start. In Jacksonville, it’s The Children’s Miracle Network. In Columbus and Phoenix, it’s Scares That Care. That’s a charity for children that get burned.” 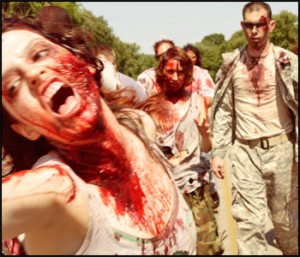 What’s new for the race, this year?
– “We want to grow. We want to make Nashville a destination. Last year, runners ran away from zombies. This year, they’re also running through what amounts to a giant haunted house in Percy Warner Park. In the scenes, the zombies cannot come out and take your flag. They’ll be ahead of you. That would have the deck stacked against you. We want to make sure, along the way, we have zombies shanked to trees, and they’ll be reaching for your flags. We want to keep everyone on their toes.”

Do the races in every city feature a haunted house the runners must run through?
– “There’s lots of zombies in every location, but this year we’re specifically growing Nashville, and next year we’ll try to do it everywhere else. (The haunted house) is what’s gonna set Nashville apart. There’s much more ambiance. That’s just Nashville; this year. Last year, we had zombies in the race and staggered throughout. This year, we’ve really grown Nashville’s race.”

Is AMC a sponsor for your races?
– “We were approached by AMC, because AMC was dropped by Dish Network. So, AMC contacted us and asked if they could be a sponsor for our event… if we would help them out with their campaign. We said yes, so now we’ve got a lot of Walking Dead things to go in our swag bag.

What is the estimated size for Nashville’s 5k race?
– “Last year, we had to cut off attendance at 2,000. Currently, I’m not sure. Nashville tends to procrastinate, in terms of buying tickets. We’re moving along at a steady pace, at the moment.”

How many zombies will be in attendance?
– “We make sure we always have enough. At the front end, we thought we’d have all zombies and struggle to have runners. But what we have is lots of people who love to run in costumes. Last year, my favorite costumes were these two guys dressed as the Mario Brothers. They wore jumpsuits and looked overweight. As zombies came behind them, Mario opened his jumpsuit and rubber balls went everywhere. Then Luigi opened his jumpsuit and started throwing banana peels. People really turn out with awesome costumes. It’s just a fun day for all.”

For Nashville, what would you like to see happen in future races?
– “We would like to partner with other zombie groups and places in downtown Nashville to become The Infected Zone. Make it something people would travel to every Halloween.”

Have you considered making next year’s Zombie 5k Buffet even bigger?
– “At some point, we’d like to do a zombie pub crawl. A zombie prom. Kind of pull together a big zombie weekend. It would just be amazing.”