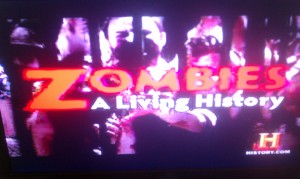 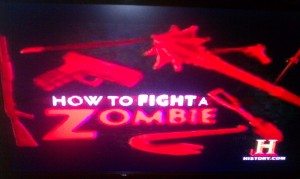 Zombies present the greatest threat to civilization we can imagine. But, if we prepare for the unthinkable, we can be prepared for the inevitible.” – Creepy Narrator

As this epic, two-hour TV special unspools, I experienced mixed feelings. At first, I felt excited anticipation, then confusion, then informative and finally exuberance. This program originally aired on The History Channel ’round Halloween, but has been patiently awaiting for me to finally review it on my TiVo. Although it is filmed for entertainment purposes only, the special has a documentary-like feel, with great production values and many great novel writers and professionals giving their own two cents of the topic.

There aren’t too many two-hour zombie specials airing on TV nowadays, so I was understandably excited. But once I got into watching it, I was confused. The Narrator (and all the Fiction Authors who were interviewed) spoke to the subject of Zombies as if they are a fact; as if they are a common occurance in reality. Each of the novel writers speaks as if elements of pop-culture movies and books are a reality.

“To understand zombies, you have to know where they come from,” the Creepy Narrator spoke. And where would that be, Creepy Narrator? The common answer would be all Zombies are based on a movie from George Romero — Night of the Living Dead. To this, all I could do was roll my eyes and wade through the remainder of the two hours.

But the show picked up, and became informative. Zombie origins have actually been traced to one of the earliest known stories in literature, The Epic of Gilgamesh. In it, it is written, “I will raise up the dead and they will eat the living. And the dead will outnumber the living.” That’s impressive writing, especially since it’s from the 7th century BC.

After that brief history lesson, Creepy Narrator explored elements of the undead covering multiple cultures:
– The Chinese word for the living dead is “Jiang Shi,” which is a hungry ghost, returning to devour the living.
– In Arabia, becoming a zombie, or “Ghoul,” was punishment for living an immoral life.
– In Scandinavia, a “Draugr,” was known as an undead Viking with an insatiable appetite for human flesh.
– In England, a “Revenant,” is a spirit who became the hungry dead, needing to feed on the living.
– The Ancient Greeks “Maschalismos,” to mutilate the body so it doesn’t come back from the dead

Just before the commercial breaks, informative snippets detailed “How to Fight a Zombie” with various weapons (katana, mace, crowbar, battle axe and spear, as well as hand-to-hand combat). These tactics could easily work for any self-defense class as well. I really enjoyed them.

Other topics discussed were various infectious and contagious diseases, death, fear, paranoia, burial, cannibalism, the Windigo, the Black Death and how each of the previous subjects could lead humanity to a zombie wasteland.

While the program mostly dealt with “What If?” moments, the most entertaining segments were absolutely true:
– A group of Bio-Mathmaticians at Carleton University in Canada created a very sophisticated linear programming model to see what would happen if zombies were real. Results: Unless wiped out at a very early stage in their development, zombies would overrun the human society as we know it. – “When Zombies Attack!: Mathematical Modelling of an Outbreak of Zombie Infection
– The Centers for Disease Control and Prevention published a blog in May 2011, titled “Emergency Preparedness and Response, How to Survie a Zombie Apocalypse.” In the article, it likens preparing for a zombie apocalypse to that of preparing for all the other natural disasters we’ve heard about within the last 10-15 years.

Other Random Zombie Factoids:
– Some cultures burned corpses, others bound them, some buried them with rocks in their mouths; all hoped to prevent the corpses from re-animating, at all costs.
– The US Government has the capability to create a weaponized pathogen-parasite combination to form a weaponized super-virus. The results of this super-virus is a zombie-like plague that ultimately could destroy humanity.
– Mary Shelley’s Frankenstein, written in 1816, is the most famous zombie in history.
– MAX BROOKS was the most entertaining personality. He admitted to actually having a Zombie Preparedness Kit, called his “Earthquake Kit.” It includes everything he’d need in a zombie plague. The same items to be used in any disaster preparedness kit.
– Generation Z: the group of kids who grow up during the Zombie Apocalypse, one which is compared to those who lived during World War II.
– I wish the Rear Admiral had more face time for an interview. He was the author of the CDC Zombie article, which was incredibly fascinating. Somehow, his day job got in the way. He had less than two minutes on the show.

Strength: Sometimes fun, sometimes informative. The foreboding background music was amazing.
Weakness The various clips of TV shows, movies and historical events that aired added a great effect. But at times, it moved at a slow pace; felt like I was taking a class at school. A long one.
WTF Moment: The Narrator sounded creepy, in a bad way. In a VERY bad way. WTF, indeed!

Noteworthy Quotes:
– “Human history is littered with the corpses of dead civilizations that fell when a (zombie) horde attacked their village.” – Max Brooks
– “Even if Zombies don’t exist, fear is, in some ways, a social contagion. It doesn’t matter, whether or not Zombies actually exist. If enough people think that Zombies could exist, then you’re going to have to reassure their fear.” – Daniel W. Drezner
– “The psychological aspects of the zombie plague might be more damaging than any direct effects of the contagion itself. You would be fighting something that looked like your loved one, but is no longer your loved one.” – Stevel Schlozman, MD
– “Survival is all about guns, band-aids, beans in some cave somewhere. Survival is about driving yourself to get through the hardships ahead.” – J.L. Bourne
– “It kinda sounds funny, Twitter might actually stand between us and the (Zombie) Apocalypse.” -Jonathan Maberry
– “Zombies are not the thing to fear. The thing to fear is what humans are capable of doing, when they’re afraid.” – Kate B. Harding