A Very Murray Christmas for Us All 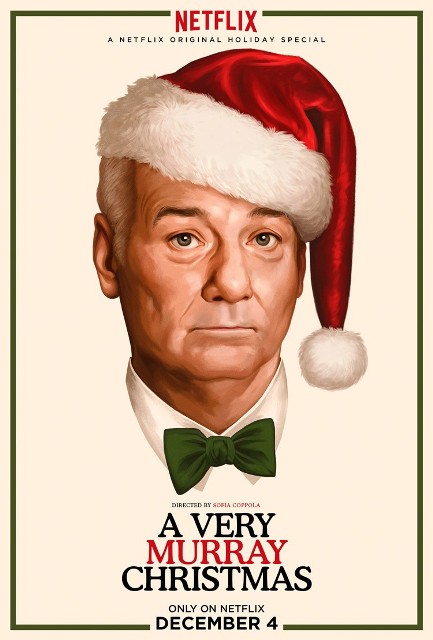 In many ways, A Very Murray Christmas isn’t like the holiday variety shows your parents used to watch, but then again, in many ways, it is.

Gone are the specials starred by suave serenaders such as Bing Crosby and Bob Hope, replaced now by an ensemble of celebrities known more for their big-screen roles and of course many notable Saturday Night Live alum a few generations removed from Murray’s own stint. Sophia Coppola (who also directed Murray in the somber and touching Lost in Translation) takes her own approach to the genre, while paying homage to the classics. In the opening tune, Bill sings a rendition of The Christmas Blues that rivals Dean Martin’s original and perfectly sets the mood for what’s to come.

Much like Scrooged, Bill Murray stars as a miser who finds Christmas more of a chore than a time for celebration. Set in New York City’s Carlyle Hotel, the atmosphere is sullen, desolate, and even too cold outside for our host to abandon his contractual duties. The ambiance really rings true for a lot of people around this time of year, who find that the holidays can really be stressful. In fact, as soon as things start to pick up, a blackout threatens to ruin the entire production, sustaining the audience’s realization that they are tuned into a Netflix original instead of a major network broadcast. This type of theme works really well for Christmas productions, and almost always has the same morals in mind. No matter what the holiday season has in store for you, if you are in the presence of good company, it isn’t so bad.

The mood really picks up from there and all of the melancholy carols start to turn into festive and joyful tunes. Even the Grammy-winning pop-rock band Phoenix delivers a catchy original song in a short-but-refreshing cameo. In fact, while many songs are widely recognizable Christmas classics, a good number of them are nontraditional and even secular. Not only that, Murray takes a lot of liberty ad-libbing many of his verses, all the while accompanied by Paul Schaffer on piano. Really, A Very Murray Christmas is as lax as it is self-aware. What else are we to expect from Bill Murray, though? At this stage in his career, he only does the roles he wants and delivers in a way that his fans have adored from the beginning.

In the end, everything drives toward a fantastic finale, complete with bedazzled dancers, a flurry of snow, and, of course, Miley Cyrus. Will A Very Murray Christmas become a holiday classic to be enjoyed for years to come? Maybe for some of us. It certainly seems to be more re-watchable than Rudolph the Red-Nosed Reindeer, at this point. Though, I am certain that it will be enjoyed by fans both young and old.