The Taking of Deborah Logan: A Christmas Treat! 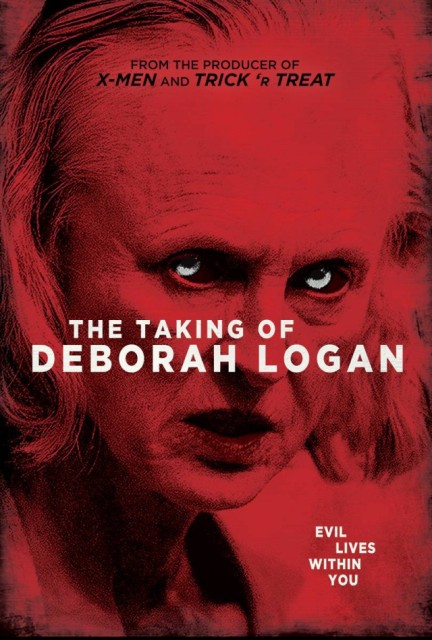 As part of my ever-developing need to find fresh new ideas for haunts, I find myself watching an increasing number of horror films. Since the mainstays like Freddy Krueger, Jason Voorhees and Michael Myers have all been used so many times, their mere mention does not excite me anymore. Independent films bring to the table something new, something fresh and something at least entertaining to some degree; unfortunately, most have such cheesy acting or writing that it is hard to sit through them without deciding that cleaning the gutters or raking leaves is a better use of time. The needle-in-a-haystack phrase constantly comes to mind when surfing through the countless busts in the vaults of Netflix.

However, a few days ago, the little lady and I found a gem. A movie that had we not given a chance, we would have missed out on one of the truly frightening films of its time. That film is The Taking of Deborah Logan.

The film centers around a documentary crew, consisting of medical student Mia Medina and her two cameramen, Gavin and Luis. The team is working on a project about Alzheimer’s patients. They begin following a patient named Deborah and her daughter, Sarah. Sarah convinces her mom to do this project as they are in desperate need of money to save their home, as she is no longer able to keep up with the mounting medical bills.

As the film crew records their daily lives, Deborah begins to fall deeper and deeper into the disease. Her doctor believes it to be fine, but some of the actions she exhibits defy logical explanations. As more and more strange things happen, the team finds out that their project has taken a sinister turn and now all of their lives are on the line.

As you can probably gather from the name of the film, the word “possession” comes to mind. While this film is no Exorcist, it does deliver terrors in much the same way. Even with the limited budget, the minds behind this film found ways to increase the creep factor and to give you a feeling of dread. And while the found footage genre is saturated with many crappy films, the Taking of Deborah Logan uses it in a way to pull you in and make you forget it is only a film.

So, this holiday season, take 90 minutes out of your day, curl up with someone (’cause this movie is not one you should watch alone) and be prepared to get a great scare. The Taking of Deborah Logan is worth every penny of your Netflix subscription.