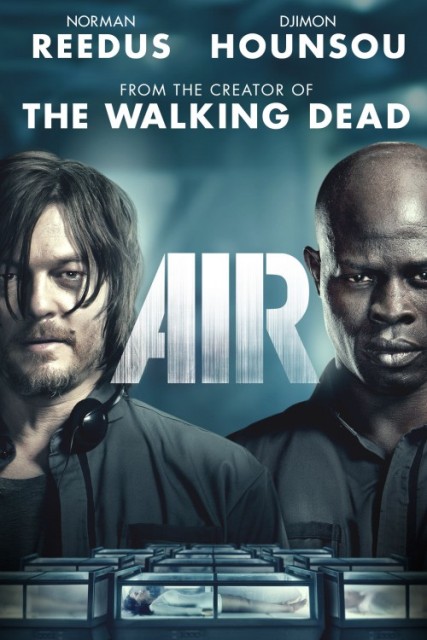 Per Matt
Robert Kirkman, David Alpert and Norman Reedus take a break from their usual undead duties in order to take a breath of fresh Air.

The creator, executive producer and biggest star, respectively, of The Walking Dead franchises at Skybound Entertainment team up to create a different type of movie, one which features a post-Apocalyptic world where humanity has been practically wiped out from chemical weapons. The atmosphere has become unbreathable and fearing the worst, the U.S. government has transformed multiple abandoned missile silos into makeshift underground bunkers, where doctors, engineers and all sorts of important people are stored in cryo-sleep tubes as a contingency plan, ready to awaken when living conditions improve.

Norman Reedus (Bauer) and Djimon Hounsou (Cartwright) are two maintenance workers who are awakened for a brief amount of time every six months in order to check in on these sleepers, who are the last remnants of a lost human civilization. Making matters worse, the Noah’s Ark facility where they work has incredibly outdated technology which is irreplaceable, just in case an emergency should occur, setting up the premise of the movie.

Technical difficulties with a Deep Sleep Vessel lead to a malfunction just before the bunker’s oxygen is shut down. The pair fight over who should live and if they could even kill a sleeper, taking the place of the very people they’re trying to protect. They decide on a risky, long-shot idea that may just save them: Venturing outside and into a neighboring facility, one which has spare parts that could very well save their lives. The clock ticks as the backup air supply is quickly diminishing.

The techs must endure many obstacles on this very bad day. Success means they will save the human race. Failure is not an option. The weight of the world is weighing on their shoulders, which means there’s no pressure at all. Airborne contaminants, high-tech coffins and ghosts of relationships past may lead them to insanity, that is, if they can live long enough to actually go crazy.

Reedus does a decent job stepping out of Daryl Dixon’s shoes, sharing the spotlight with Hounsou. The highlight of the film happens when he gets to experience some shrink-wrapped terror. It’s definitely a nightmare-worthy scene.

Air’s claustrophobic environment and taut storyline are a perfect match for the science-fiction genre. The movie has shades of 2001: A Space Odyssey, LOST and Alien wrapped around its script. I’ve noticed a trend happening in Hollywood where more smaller-budgeted movies, focusing on intricate storylines with fewer actors are being released with limited success. While I barely remember seeing the brief marketing campaign for this movie, I’m glad I gave it a shot. I really enjoyed it.

The clock’s always ticking… for hope.

Strength: A straight-forward storyline keeps the audience on its toes the entire time.
Weakness: There isn’t a ton of background information given, but it’s not really needed.
WTF Moment: After “sleeping” for six months, Hounsou magically has no hair growth. Must’ve been overlooked by the script supervisor.

Notable Quotes:
– “It’s not murder; it’s survival.”
– “Can’t trust anyone anymore.”
– “Those sleepers creep me out.”
– “Who knew this end-of-the-world shit was real?”
– “Give it enough time, everything’s gonna break.”
– “Try to save a guys’ life and he kicks you right in the nuts.”
– “Maybe they’ll be better prepared for the next Apocalypse.”