The 2016 Golden Globes Nominations From a Geek’s Perspective 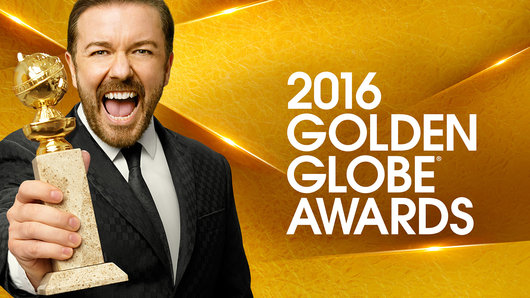 Per Matt
The nominations have been announced for the 2016 Golden Globes awards ceremony and surprisingly, geek culture was embraced with the list. Here’s a quick look at the potential award winners, from a geek’s perspective.

The Hollywood Foreign Press Association is a small, secretive group representing journalists from 55 countries that presents the Golden Globes, which awards the best in the fields of both television and motion pictures. One of the biggest winners from yesterday’s announcement was Carol, a soon-to-be-released film about a lesbian love affair in 1950s New York, which led all nominations with five, including noms for best drama, best actress (Cate Blanchett and Rooney Mara), best director (Todd Haynes) and best original score.

Returning for the hat trick, Ricky Gervais (who always kills it!) will host the 73rd Annual Golden Globes on Sunday, Jan. 10, 2016. Many upcoming movies on the list have either had limited releases or will soon be released later this year. For many years, the HFPA has had a penchant for inviting past Golden Globe and Oscar winners and schmoozing big-name talent with nominations (many times undeserved) in order to boost the ratings of the awards show.

While I was thrilled that The Martian received a small slice of due respect, it carries with it the most controversy, as the movie was included in the Best Motion Picture, Musical or Comedy category. The Martian was a great sci-fi drama and made major bank at the global box office, but it was definitely neither a musical, nor comedy. Its inclusion there feels like an abstract invitation for big-named talent to appear on the show (and basically win the award for an incorrect category). Sadly, throughout the years, many nominations have received incorrect-category awards in the past and will seemingly continue to do so in the future without any remorse by the HFPA. Even though it feels like a sham at times, an award’s an award. Anything to boost a project’s overall revenue is a good thing, right?

Scanning the nominations, computer programmers and hackers get their due, along with a little fantasy and science fact thrown into the mix, as well. Represented genre films The Hateful Eight, The Revenant, Ex Machina, Steve Jobs, Spectre, Mad Max: Fury Road and Furious 7 join genre TV series Mr. Robot, Scream Queens, Fargo and Penny Dreadful on the big list. With the past season of Game of Thrones being its biggest and the best one so far, it would only be fitting for the franchise to win its Best TV Series category this year. Jon Snow would definitely approve this gesture… it would almost make his character’s death a tad more tolerable (or is he actually dead?).

Quite a few great actors are in the mix here, many of which have had some success portraying superheroes and villains onscreen (Fox’s former and current X-Men franchise is well represented here). While the movie categories seem to get most of the media’s attention, the television categories seem to have the biggest appeal for me, where a plethora of big-name talent prepare for a duel to the death. Lady Gaga. Queen Latifah. Christian Slater. Patrick Wilson. Kirsten Dunst. Rob Lowe. Jamie Lee Curtis. Julia Louis-Dreyfus. Idris Elba. Eva Green. Viola Davis. Liev Schreiber. Jeffrey Tambor. Patrick Stewart. So much talent fighting for only a few awards!

There will be lots of storylines to watch when the awards show airs. Stay tuned for more Globes speculation and our predictions for the show in January.