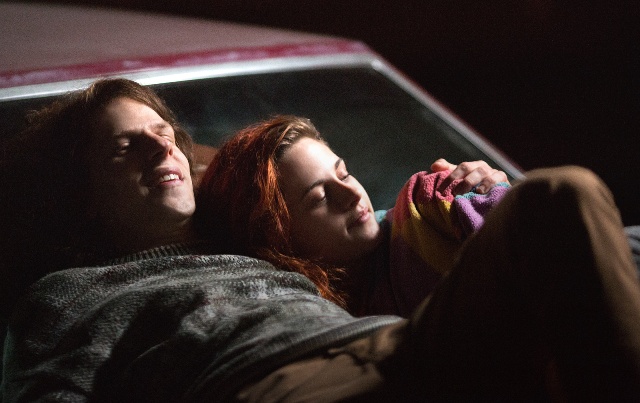 Per Matt
As one big mash-up, American Ultra never seems to fully explore each genre it employs.

Part Cheech and Chong, part James Bond, with shades of the Bourne and Mission: Impossible franchises, the storyline never gets bogged down with too many details. At one point, it’s a brief exploration of Jesse Eisenberg’s character, Mike Howell, a stoner who happens to suffer from some massive panic attacks. Once Howell is revealed to be a dangerous secret government agent who’s had his mind wiped, he’s reactivated and fights to survive elimination by the CIA, with the support of his girlfriend/handler Phoebe Larson (Kristen Stewart). The extermination attempt wraps too quickly without developing any of the main characters and then quickly jumps to a mission impossible in Manila, while leaving the possibility for future sequels (these days, don’t they all?).

The chemistry between Eisenberg and Stewart is great, but the rest of the cast barely has much to work with. Topher Grace is a one-note antagonist and Connie Britton felt totally wasted as a minor character. Maybe she asked to be written out of the script, so she could return to star in Nashville? John Leguizamo’s sensitive drug dealer may have been the most entertaining; however, his appearance is merely a cameo.

Borrowing from the Home Alone school of thought (does anyone even remember those movies?), where any household item can be a deadly weapon if used properly, American Ultra is not quite the fun stoner comedy that was Pineapple Express and not quite the thrilling adventure of Mission: Impossible, but a pretty wild ride.

Strength: Cool concept…
Weakness: None of the mash-up genres are fully explored, only moving the story along
WTF Moment: Be on the lookout for the cup of noodles product placement. Many similar ones were given out as promotional items!