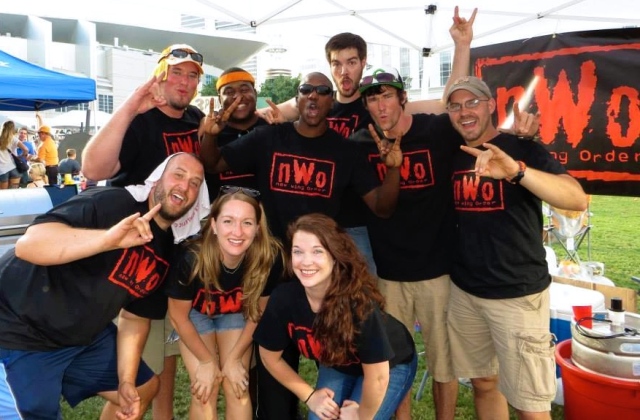 Per Matt
If you combine award-winning wings with a wrestling theme, what have you got? New Wing Order!

Recently, at the Music City Hot Wing Festival, New Wing Order made its presence felt in a big way. The team was the life of the party, creating a fun atmosphere while dressing and acting like wrestlers and offering some amazing chicken wings. Throughout the event, the group cooked up 400 lbs. of wings and was consistently one of the most popular cooking teams of the festival.

Taking a brief break from the festivities, Jeremiah Carmichael visited with me to discuss the the growing legend of New Wing Order that has been taking flight throughout the Volunteer State. 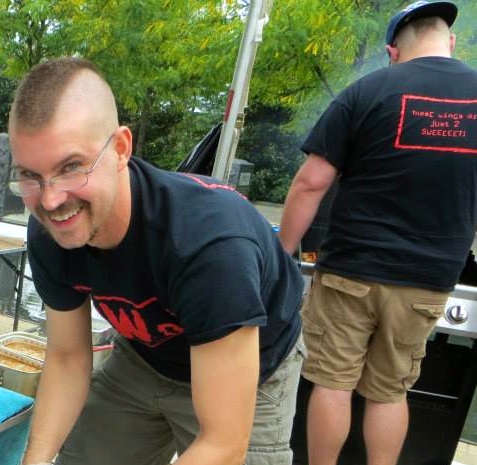 What led you to chicken wings?
– “For a long time, Jesse and Calvin had done barbecue, but it’s a little more costly to get into barbecue competitions. This Nashville wing competition started four or five years ago and then the guys in Memphis started making them, so we thought, ‘We’re already making barbecue, we might as well make chicken wings, too.’ We got together one day and started frying up some wings. We tried smoking, grilling, frying and bunch of different stuff until we settled on a method. That’s kind of where it started: A bunch of guys who like to get together to eat and drink a little beer, while we’re at it.”

How did your group adopt the wrestling theme?
– “We all grew up watching wrestling. When we were going through team name possibilities, somebody randomly threw up ‘New Wing Order’ and that sounded pretty solid. We rolled with it and it just grew from there. Now, when we get together as a group; we make a scene. We’ve got a wrestling bell that we started using in Memphis this year. We have a lot of fun with it.”

People really enjoy your wings. Your group consistently had the longest line at this festival.
– “Yeah, it’s been that way. People seem to enjoy what we’re doing and we’re glad. It started because we wanted to make a good product, something that people would enjoy. Obviously, we want to win the competition while we’re here, but another big thing is interacting with the public. Look at us: We’re a bunch of big guys. These guys like to eat. I’d like to think we have a pretty good idea of what tastes good. We’re always tinkering with our sauces when we get together.”

Overall, how many people are on the NWO team?
– “We’ve got 20 total between Nashville and Memphis.” 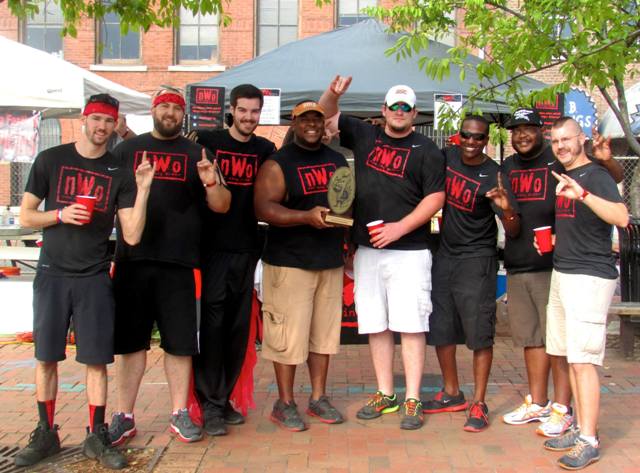 Which wing recipe won the Grand Championship award?
– “The Memphis Buffalo (we call it the Main Event), made its debut as our competition sauce this year at the Southern Hot Wing Festival, where it won. For public events, we’ve got seven different sauces. We’ve got a Hot Chicken sauce that we only serve in Nashville, but we don’t use it in Memphis or Knoxville. We’ve created a Tennessee Fire sauce just for Lynchburg that has Jack Daniel’s Tennessee Fire in it. We try to keep our flavors regional and do different sauces for those areas.”

I really enjoyed your hottest sauce, the Dragon. Where does it rank on the Scoville scale?
– “I don’t know that we’ve tested it, but it has heat from four different sources: Chipotle, cayenne, habanero, and ghost pepper. It’s important to us to that our hottest sauce has good flavor to go along with scorching heat and adding all these different peppers (and a couple secret ingredients) is what makes it so good.”

Has your group ever made any of your recipes with beer?
– “We did one, earlier in the year. It was a Summer Ale BBQ Sauce and the recipe was actually featured in the Tennessee Craft Beer Magazine. It’s a sweet sauce with just a hint of Summer Ale, perfect for grilled wings. We used Blackstone’s Strawberry Picnic Summer Ale for that recipe, but you can use any craft beer.”

Where will NWO be appearing next?
– “This’ll be our last competition for the year, but if anybody’s in Lynchburg for the Jack Daniel’s World Championship Invitational Barbecue, we’ll be there. We’re looking to start a business with it, locally, but it won’t be anything until at least this point, if not later, next year. It’s so much easier to get rolling with a food truck, than it is with something brick and mortar.”

“We’re hoping for something in 2016. Jesse’s putting a business plan together and we’ve got a few potential investors to help us get rolling with that.”