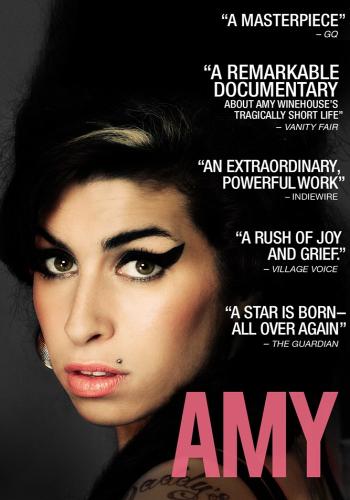 Per Matt
With the recent death of Scott Weiland, it seems like an appropriate time to examine another favorite artist of mine, one whose incredible recordings and time on this Earth were also cut way too short, Amy Winehouse.

Amy is a British documentary that chronicles the drug addiction battles, mental health issues, rocky relationships and all of the enablers who did little, if anything, to prevent the death of the popular singer. No stone is left unturned, as the the chain of responsibility in protecting Amy from herself failed, from her husband, to her manager to her family and friends. To say it’s controversial is an understatement, especially since the movie was commissioned by Universal Music UK (her music label) and initially involved her surviving family members and friends, until they realized their efforts would not go blameless throughout the storyline.

More than 100 interviews, audio recordings, photo shoots, home movies, paparazzi photos, unseen archival footage and previously unheard tracks are included here, basically creating an oral history of the singer. She always thought singing would be a future possibility, but never thought it would be a career choice. Amy was often described as being an old soul in a very young body, but eerily foreshadowed her own grim fate. She admitted she’d go mad if she ever became famous, which ultimately became a sad reality.

Early bouts with depression and bulimia were temporarily cured by performing her music. All she ever wanted to do was to perform for small audiences in jazz clubs. But once she began a tempestuous, extreme relationship with an on-again, off-again terror and had a taste of professional success, she was torn between the love of her life and a never-ending consumption of illegal substances.

Her introduction to hard drugs, her first overdose and her first threats of rehab happened in the early stages of her career — which she somehow survived. All of this drama “inspired” her breakout success (and ultimately her Grammy awards). Not long after that, she died of alcohol toxicity at the age of 27.

It’s so easy to say — and generalize — that fame is fleeting, but watching the video evidence, you can almost see her downfall happening in real time. Watching her in a drugged-out stupor on camera is super sad, especially when she’s onstage. Not long ago I watched one of her previous performances at a large festival on Palladia, where she continually stuttered and stumbled. She could never stop herself and no one had the guts to ever force her to stop. Her entire life feels like a cautionary tale… like a Behind the Music episode of what not to do with your life.

Much like being a fan of Weiland’s Stone Temple Pilots, I really enjoyed the short-lived musical career of Amy Winehouse. As a documentary, Amy runs a little too long, though, and could have been edited down out quite bit. Many of the singer’s childhood appearances feel unnecessary and could have been removed, reducing the film’s two-hour-plus running time, but each of the included performances here are great. Unfortunately, her official cause of death is hinted at, never being fully explained. That neglected element felt incredibly overlooked.

Was Amy really just a humble person caught in a bad situation, like her security guard proclaims? Or was her situation actually caused by everyone within her inner circle cashing on her fame and taking advantage of her, including her manager, her family and especially her husband? This documentary attempts to explore both scenarios, letting the viewer decide which seems more palatable.

Strength: Great never-before-seen performances of a great talent.
Weakness: Movie lasts a little too long, could’ve used more performances.
WTF Moment: Amy Winehouse was proud to say she was not a singer; she was a jazz singer.

Notable Quotes:
– “This is so boring without drugs.”
– “Love is, in some way, killing me.”
– “I’m not like some messed-up person.”
– “If she has another seizure, she will die.”
– “She needed music as if it was a person.”
– “You can’t force treatment on somebody.”
– “I can’t help but demonstrate my Freudian fate.”
– “I fell in love with someone who I would have died for.”
– “Singing was always important to me, but I never thought I’d end up becoming a singer.”