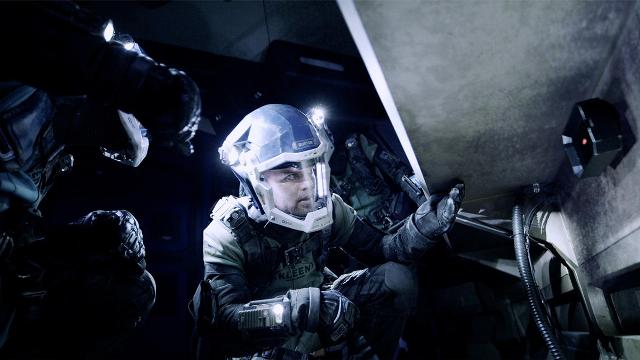 Set in the 23rd century, the human race has colonized the solar system, where air and water are tightly rationed as the population’s most valuable commodities. The United Nations controls the Earth, Mars is an independent military power and tensions are rising as a conspiracy unfolds which may threaten humanity’s existence. So begins The Expanse.

As the series premiere, Dulcinea, opens, it is revealed that the people of Earth and Mars are not exactly best friends. Crews from both planets have stripped the ice completely from the dwarf planet Ceres and in its place have built a space station that has unearthed precious materials that are necessary for survival. The viewer is quickly introduced to Earthers, Dusters, Inners and Belters, different classes of people who all seem to speak different languages and have very little trust for anyone outside their group.

Detective Miller (played by Thomas Jane) is a police officer on Ceres, who is no master of disguise, always wearing a goofy hat for no known reason, other than to keep the rain off his head (after one episode, no rain has fallen). Tasked with a discreet mission to find the missing daughter of a major shareholder, Miller’s sometimes corrupt ways should help him locating the missing young lady. Jim Holden (Steven Strait) is an executive officer on the ice freighter Canterbury. Although reluctant to accept a recent promotion, Holden leads a rescue mission to answer a distress call, one that may lead to a possible trap. The third cog of this show’s mythology centers on Chrisjen Avasarala (Shohreh Aghdashloo), a U.N. executive who has discovered a terrorist from the radical faction OPA may be trying to start a war between Earth and Mars, which must be stopped at all costs. To say that The Expanse is developing storylines ripped from today’s headlines is a major understatement.

The inside and outside environments pair nicely with the moody, creepy lighting, which makes The Expanse look like no detail was skipped in bringing James S. A. Corey’s series of novels to life. Exploring a derelict ship, the crew is shown with in-helmet cameras that create extreme close-ups and interesting angles. Sadly, the Belter language is quite difficult to follow, but it’s much easier to understand while watching the subtitles scroll on by.

The pilot episode of The Expanse reminds me of the great episodes of Space: Above and Beyond. I haven’t been more excited about a science-fiction show airing on Syfy in a very long time. Piggybacking off the outer-space success of Gravity, Interstellar and The Martian, there’s a good reason to expect The Expanse to have a bright future. Also, be on the lookout for Chad L. Coleman (Tyrese on The Walking Dead) to appear in more than a few future episodes of the show. Maybe that’s the real reason why he was killed off that show.

Strength: Great space opera that’s revealing a mystery.
Weakness: If only the inaudible Belter language was easier to understand.
WTF Moment: A futuristic cover of Black Keys’ Tighten Up played during a steamy zero-g sex scene.

Notable Quotes:
– “Captain’s never wrong.”
– “Standby for thrust correction.”
– “If I want his ass kicked, I’ll do it myself!”
– “Brothels on Ceres don’t like extending credit.”
– “When people don’t tell the truth, it always ends badly.”