Angel Has Fallen Brings Some Sizzle To Summer 2019

Let’s face facts: Most people love a good summer action film. There is something about explosions, guns and violence that just screams “American Summer.” Hollywood knows it. Hell, they invented it. And we eat it up.

The Gerard Butler series of Fallen films is a modern-day staple in the action-film genre. From Olympus Has Fallen through London Has Fallen, we have seen modern-day terrorism stopped dead in its tracks through the efforts of one Secret Service agent: Mike Banning. Even his name exudes machismo. Who would want to mess with America knowing that Mike Banning is on the job? And add on the stylish acting of Morgan Freeman as the flippin’ President of the United States, you have a sure-fire action blockbuster.

Angel Has Fallen is no exception. In this third installment, Mike has been dealing with migraines and insomnia brought on by the multiple concussions and other injuries suffered through his other ordeals. With the current Secret Service director about to retire, Mike is the sure-fire choice. However, even with all the injuries and health issues plaguing him, he finds himself not wanting to take the job, relegating himself to desk work and leaving the field.

During a fishing trip, President Trumbull is targeted by killer drones in an assassination attempt. The drones kill the entire detail of Secret Service members except for Banning, who was purposefully spared by the perpetrators of the attack. However, before the drones could finish off the President, Mike saves him, only to have an explosion go off just above them. The resulting explosion puts President Trumbull in a coma and adds another concussion to the count for Banning.

Based on planted evidence found by the FBI, Mike is arrested for the attempted murder of the President and the actual murders of his squad. But, as you can probably guess, Mike escapes captivity and begins tracking down whoever did this to him. With no help available, Mike has no choice but to seek out aid from the one person he never wanted to see again… his dad (Nick Nolte). 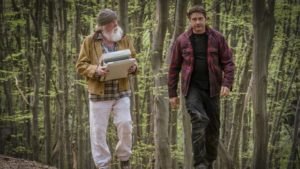 An unexpected family reunion is a highlight of Angel Has Fallen.

Angel Has Fallen brings together Butler and Nolte beautifully. With the overall tone of the Fallen series being serious and dramatic, Angel Has Fallen added the new father/son dynamic in a way that reminds one of the Lethal Weapon films. Gerard and Nick play off each other perfectly, with Gerard’s Banning being more serious and focused, while Nolte’s Banning is more of a loose cannon. It adds a level of comedy to the series, and it works.

With all the praises I have been giving this film, there are still several things that fail. As mentioned before, Nick Nolte is introduced to the series as Mike Banning’s estranged father. He has been living “off the grid” and it shows in his attire and appearance. But immediately I was brought back to 2003 when I saw this version on Nick Nolte having issues with another estranged son in Ang Lee’s Hulk film. The initial appearance of the character in this film portrayed him as neurotic and detached from society. The dialogue between the two felt very much like his conversation with Eric Bana’s Bruce Banner. I am very glad this was only for a short time in the film, but it was still a downer for me.

Another problem I have with Angel Has Fallen (and pretty much the entire Fallen franchise) is the portrayal of the Secret Service members. In preparation for seeing Angel, I went back and watched Olympus Has Fallen. In Olympus, there is an attack on the White House by armed terrorists. They storm the lawn, armed with fully automatic guns and covering fire. And the Secret Service members, the highest-trained protection team in the world, runs blindly out of the doors of the White House, without cover, sporting the latest in 9 mm handgun technology. And they get mowed down summarily. The only agent who seems to understand the use of defensive positioning? You guessed it… Agent Banning. Flash forward to Angel Has Fallen and again the Secret Service members refuse to take cover, trying to take down hundreds on kamikaze drones with only handguns and bewildered looks. The entire Fallen series makes Secret Service agents look inferior, unintelligent and bumbling idiots.

I will have to say the stunt-performer work in this film is spot on. There are hundreds of explosions and fights in Angel Has Fallen and these stunt men and women were hurled countless times throughout. I am not sure how much was practical and how much was special effects, but regardless, those stunt actors deserve praise for their work in this film. It was painful to watch, but it helped convey the human toll the action in the film was taking.

And speaking of explosions and kills, the gore and makeup effects was bumped up in Angel Has Fallen as well. Several scenes depicted incredible burns, amputated body parts and disfigured corpses. For a guy who loves horror films and watches them almost exclusively, it was slightly refreshing to see the level of realism the directors chose to use. Most of the time, action films stray away from revealing the results of the carnage. But Angel Has Fallen not only revealed it, but seemed to wear it as a macabre badge of honor.

Angel Has Fallen is a solid four out of five stars. If you are looking for a summer action film that doesn’t involve the Marvel Cinematic Universe, Lionsgate has your answer. Gerard Butler delivers another spectacular performance, and works perfectly with Freeman and Nolte. The new sense of humor developed through the film is very refreshing.The violence is punched up slightly, adding a level of realism to the film, even though it still sheds a poor light on the actual training and abilities of the Secret Service.

Angel Has Fallen is now appearing in movie theaters..