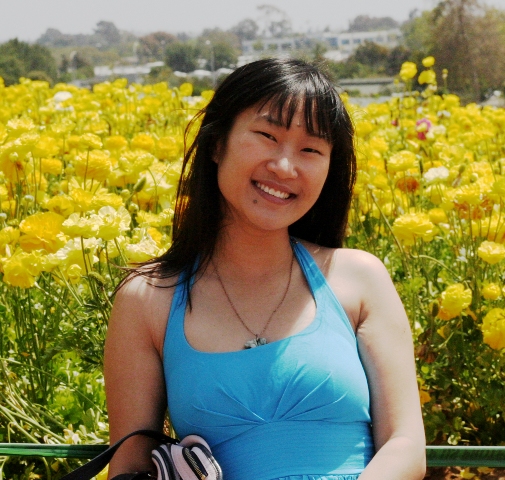 Per Matt
Anime News Network Managing Editor Bamboo Dong wears many hats: Not only does she write multiple columns for the website, but she’s constantly reviewing the latest anime and manga, managing the latest contest, contributing convention coverage and cosplaying, all while attending graduate school and sometimes playing video games. There’s never quite enough hours in the day, when you’re always on deadline. Bamboo discusses her introduction to anime, highlights her different job descriptions, previews San Diego Comic-Con and reveals her biggest geek obsession.

Is there a story behind your name? We love it!
– “Bamboo is actually a translation of my Chinese name. My birth name is Huang, which sort of means a grove of bamboo. However, everyone in my family calls me “Zhu Zi,” which literally means “bamboo.” I guess you could call it a nickname, although that’s what’s even carved on my grandparents’ grave stones, instead of Huang. (In China, gravestones have not only the names of the deceased, but also their children and grandchildren.) When my parents and I moved to the States when I was one, their friends all told them, “No one will ever be able to pronounce Zhu Zi! You have to give her a different name!” so they translated it, and decided my name would be Bamboo.”

What was the first anime or manga that sparked your interest?
– “The series that sealed the deal for me was Fushigi Yuugi. My friend and I were obsessed with it, to the point where we cosplayed the characters Miaka and Yui, and even wrote some pretty epic, novel-length self-insertion fan fic. Since then, I’ve gone through many ‘favorites,’ but Fushigi Yuugi will always have a special place in my heart.”

Do you collect anime or manga? If so, what are your favorites?
– “I do collect some anime. I used to collect a lot more, but space became an issue, so now I only collect the titles that I’m very passionate about. While I have quite a few favorite series, I collect a lot more movies, because I’m much more likely to pull those out and rewatch them. Amongst them, my favorites are Perfect Blue, as well as the rest of Satoshi Kon’s works, and the movies of Makoto Shinkai. I’m also really pumped about the new Evangelion movies, and have rewatched the first two, several times as well.”

How did you initially get involved with Anime News Network?
– “When I was in high school, I was an avid reader of ANN and a member of the forums. I remember someone in the forums once asking Chris (Macdonald) whether or not ANN would ever start reviewing anime. At the time, my friends and I self-published a short monthly anime newsletter, so I sent a copy of one of our recent issues to Chris, as well as a sample review, and he chose to publish it. Eventually, he asked me to write more reviews, and that’s how I became involved with ANN.”

Describe an average day, working for ANN (when school is not in session).
– “Yikes. Well, for me, ANN work involves watching a ton of anime. Because both of my columns (Shelf Life and The Stream) are review columns, when I’m not writing about anime, doing convention coverage, or managing the contest at ANN, I’m watching anime. The Stream is probably the most work, since it covers almost every simulcast title each season. It gets a little better towards the end of the season, when I’ve dropped a few of the titles, but at the beginning of each season, when I’m trying to write about 25+ shows, it’s a lot of work.”

Speaking of school, how do you balance graduate school with ANN? There’s only so many hours in a day!
– “I basically just don’t sleep very much! Luckily, I’m preparing to defend my thesis at the end of this August, so that will be one chapter closed in my life. Eventually, I’ll have to find a way to balance ANN with my next occupation, but I’ll cross that bridge when I get there.”

How did you get involved with writing Shelf Life
– “I started writing Shelf Life sometime around college, as an attempt to give readers a ‘buyer’s guide’ of what was coming out that month. I wrote it for several years, before taking a break for a couple years, but now I’m back on it again. These days, it’s just a review column with capsule reviews of recently released R1 DVDs and Blu-rays. The reviews are meant to be shorter than our full-length standalone reviews, but still enough to engage readers.”

Is there any one thing you’re currently geeking out to?
– “This is a tough question to answer, because I geek out about a lot of things. My most recent geek-obsession is cosplay. I used to cosplay several years ago, but took a long hiatus to focus on just doing convention coverage for ANN. I recently got back into cosplaying again, and I’m quickly becoming obsessed. I also have a few pop-culture things that I geek out to, including certain TV shows (Game of Thrones, Falling Skies, The Walking Dead, Mad Men, to name a few) as well as comic books (Marvel is better than DC, hands down!).”

“When I have time, I play video games as well, ranging from RPGs (I’m very excited about the new Kingdom Hearts that they just announced!) to action adventures to first-person shooters, as well as some Tekken Tag Tournament 2 (Alisa and Panda are my super team!). However, the biggest thing that I geek out about is sports. I know it’s not typically considered a conventional ‘geek’ topic, but sports fans can be super nerdy! I’m a huge fan of football, soccer, and hockey, although I’m the ‘geekiest’ about football. I love Fantasy Football and staring at stats, and come Fall, I usually spend every Sunday camped out in front of the TV with my friends and watching the games.”

What’s your all-time favorite video game?
– “My all-time favorite game franchise ever is Kingdom Hearts. I think the fight mechanics are really great, and both KH1 and 2 are two of my favorite RPGs of all time. I also play a lot of shooters, but I admit that I’m absolutely terrible at them. I just like being able to play co-op campaigns with my friends from back home (in Colorado), just like in high school.”

Do you get to attend many conventions throughout the year? If so, how many?
– “This varies. I usually attend at least two (AX and SDCC), but depending on my schedule or what’s required of me, I sometimes attend up to four or five. Back in college, when I was living on the East Coast, I went to a lot more cons. But these days, being on the West Coast and being in grad school means that I’ve had to dial back.”

Can you give an example of one of your convention highlights?
– “It sounds cheesy, but the greatest highlight of every convention is meeting readers. It’s a really rewarding feeling being able to talk to people who read your work and appreciate the work that you do. I’ve met a lot of great people this way, some of whom are very close friends now. In terms of meeting people, I was very excited to meet and interview the production team behind Chihayafuru at last year’s AX, as it’s one of my favorite shows, and at the time, I was very obsessed with the show. Although not con-related, one of the coolest experiences that my job has ever allowed me to have was when I went to Mexico for a set visit to the live-action Dragonball movie. I was able to chat with Chow Yun Fat, who played Master Roshi. Chow Yun Fat is a personal hero of mine, and it’s something I’ll cherish forever.” 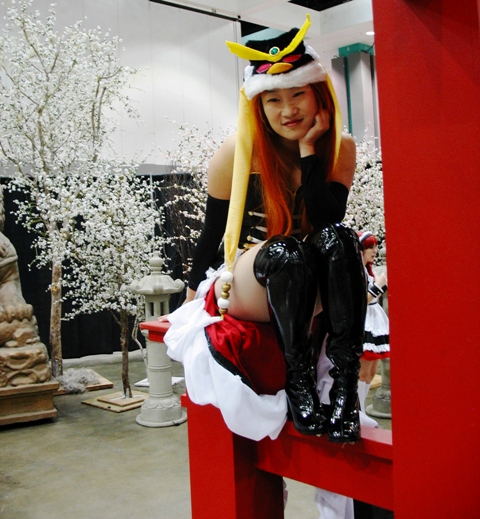 I met you at San Diego Comic-Con last year. What was the highlight of last year’s show?
– “I always love wandering around the exhibit hall and seeing the various booths. There’s a show on TNT called Falling Skies, and I’m pretty sure I’m one of maybe five people who watch the show. I always love seeing their little corner photo-op setups, even though the short lines are a sad reminder that people are missing out on this sweet show.”

What are you looking forward to at this year’s San Diego Comic-Con?
– “I’m a HUGE X-Files fan, and they’re going to have a 20-year anniversary panel this year. I’m not sure I’ll be able to make it, since that line will probably be pretty long, but I’m going to try my best.”

How did you get into cosplaying?
– “Whenever I saw a pretty outfit in an anime, I thought, ‘I want to wear that!’ So, that desire just naturally translated into getting into cosplay. I’m an engineer by education, as well, so I like the problem-solving aspect of the hobby.”

Who are some of the characters you’ve previously portrayed?
– “The most recent costume I just finished was Princess of Crystal, from Penguindrum. It was my first foray back into cosplay in several years, and I had an absolute blast. In the past, I’ve also cosplayed Chise from Saikano, Miaka from Fushigi Yuugi, Blood Seras from Hellsing, and the Windows XP moetan.”

Who’s your favorite character to cosplay?
– “I love any character that lets me make props. Blood Seras was fun because I got to carry around a giant monster arm attachment. I also really loved Chise, not only because Saikano is one of my favorite series of all time, but also because I got to dirty up my uniform by rolling around outside in the mud during a rainstorm.”

Other than anime or manga, what else interests you at San Diego Comic-Con?
– “Two things: I really like golden-era science fiction, especially the works of Isaac Asimov, so I like being able to poke around the dealer’s room for old s.f. pulps. In the past, I’ve been able to find pulps that have featured some of my favorite Asimov short stories, and it feels like winning the lottery.”

“Secondly, I like being able to meet some of my science-fiction heroes. The first year I ever went to SDCC, I went for the sole purpose of attending Ray Bradbury’s panel. Actually, back in high school, I wrote him a fan letter (and it’s the only fan letter I’ve ever written!) and he was kind enough to send back a personalized autograph. It absolutely blew me away, and I desperately wanted the chance to hear him speak in person, and it was an unforgettable experience. He used to go to SDCC a lot, and the convention is a bit darker without his presence.”

What piece of advice can you give San Diego Comic-Con attendees this year?
– “Stay in the panel room! Whatever you do, stay there! A lot of new attendees don’t know about SDCC’s no-clear policy, and don’t take advantage of it. If the panel you want to go to is at, say, 5 PM, try to get in for the 9 AM panel. Then just stay in the panel room all day (they’ll give you bathroom re-entry passes!) until your panel of interest. It unfortunately means that you have to devote much of a day just to going to one panel, but that’s the only way to guarantee entry to the big panels.”