Per Matt
On a recent roadtrip, I journeyed Down South to spend the weekend with a horde of walkers.

Atlanta Movie Tours gives two unique experiences devoted entirely to the undead. The Big Zombie Tour Part One focuses on downtown Atlanta filming locations used in Zombieland and The Walking Dead (Season One), while Part Two is located in Senoia, GA, which was used primarily in Seasons Two and Three of The Walking Dead (mostly as a stand-in for Woodbury). Both tours are chock-full of tasty, scene-specific knowledge and are a fun way to spend your afternoon.

My Saturday morning began by meeting up at AMT’s downtown office. But before arriving on time, a mandatory detour was created, because Fast & Furious 7 was being filmed nearby. In fact, Dwayne Johnson’s stand-in was seen as we rode by the orange cones and police entourage. The film industry has obviously become big business for Georgia and a top priority for the local economy, as on display this day.

The tour had just begun when we arrived. There were about 50 people participating and our two tour guides were no strangers to life after death: they were both featured biters in The Walking Dead. They told behind-the-scenes tales of working on the TV show, as well as scene-specific stories for each location we visited in our tour buses. The location of the tank, the alleys where Glenn navigates and even the rooftop where Merle was handcuffed were all showcased. 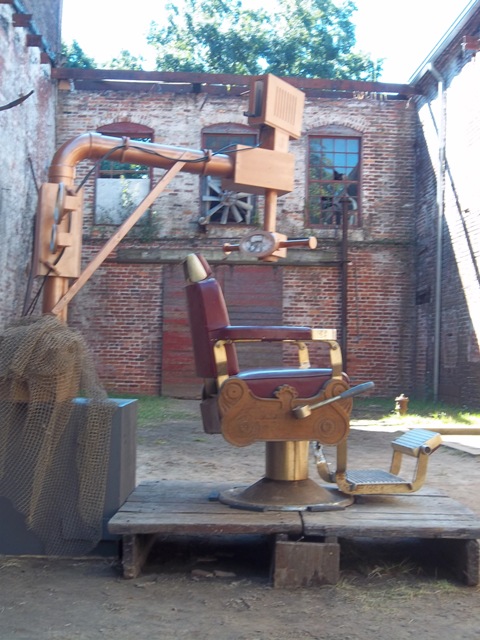 When we arrived at The Goat Farm Arts Center, it was obvious this location was featured in Vatos. This unique location is different from anything else in downtown Atlanta. This industrial building houses more than 450 artists, some of whom live on location, perfecting their craft. Catching Fire also filmed here! 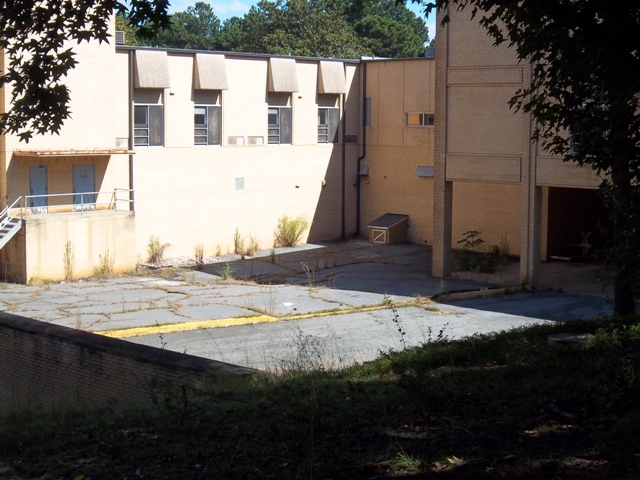 The next stop was the location where it all began: The hospital where Rick awoke. 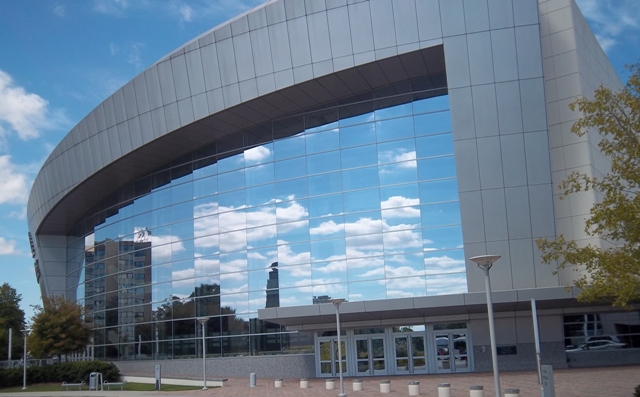 The Cobb Energy Performing Arts Center was an impressive stand-in for the Centers for Disease Control and Prevention (CDC) on the TV show. 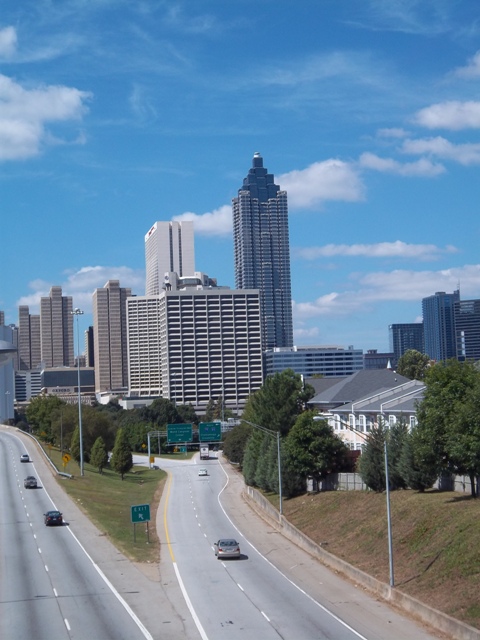 And the final destination was the money shot: the Jackson Street bridge that overlooks the entry to downtown Atlanta, (previously seen littered with broken-down vehicles attempting to flee the Zombie Apocalypse). I could easily imagine someone horseback riding down the road. 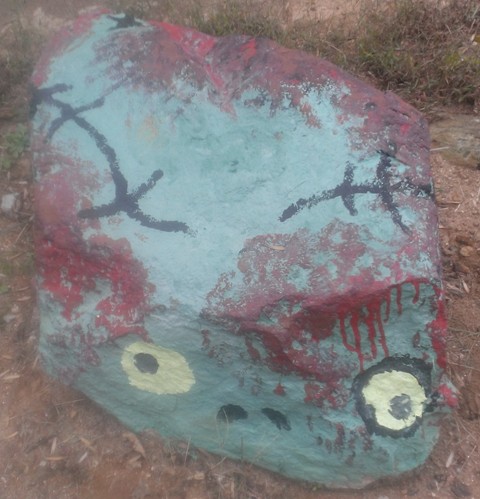 Sunday began in the quaint town of Senoia (bonus points go to any out-of-towner who pronounces it correctly on the first take). This tour was obviously going to feature many rural locations, including the waterfall where Rick’s Gang camped out (and the Ricktatorship was declared), the Sportsman’s Deer Cooler and the Oaks Motor Inn. There were even a few rocks commemorating the show, found nearby. 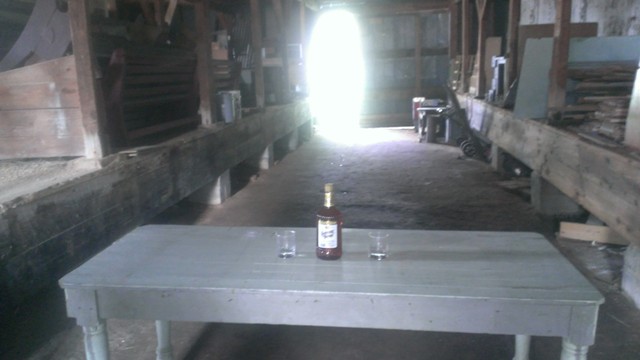 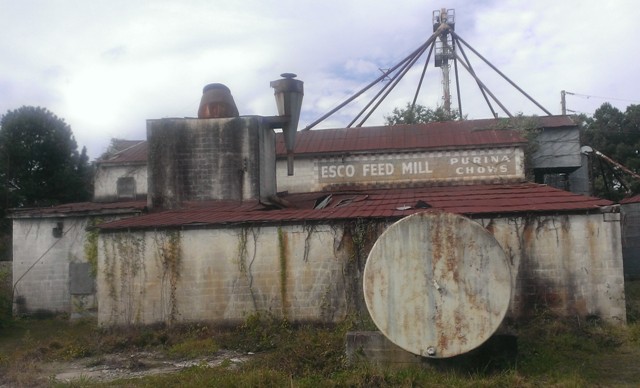 … and the Esco Feed Mill, where Merle met his maker, was even more impressive. 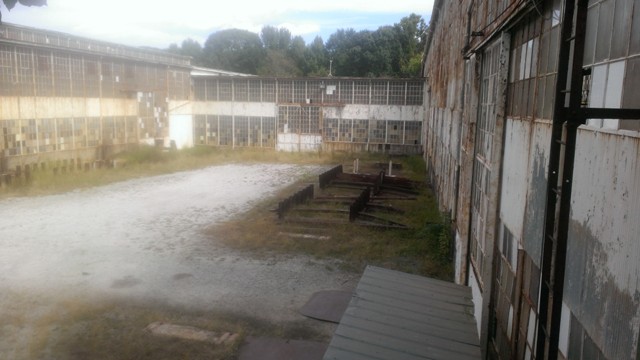 And how could anyone forget the epic Zombie Arena?

All fans of The Walking Dead should seriously consider taking both Big Zombie Tours. There are many more locations featured on each; these were just a few of my highlights. The tour guides keep it fun for the entire duration. In fact, trivia questions are scattered about the tour and prizes are awarded for successful answers. Even the most die-hard undead fan will have a little difficulty with some of the questions. I proudly won two trivia prizes: A Georgia Zombie Hunting permit and a Big Zombie Tour Bracelet!

The tours last around two to three hours apiece, but the time flies by. I was hoping to pick up some walker swag at the Woodbury Shoppe, but unfortunately, they had just closed when we arrived. Oh well, maybe next time.

Major thanks go out to Patti Davis and Carrie Burns, co-owners of Atlanta Movie Tours and honorary members of Zombies In My Blog! We look forward to returning in the not-too-distant future, when Atlanta Movie Tours partners up with Hunger Games Unofficial Fan Tours to spotlight the locations used in The Hunger Games: Catching Fire!