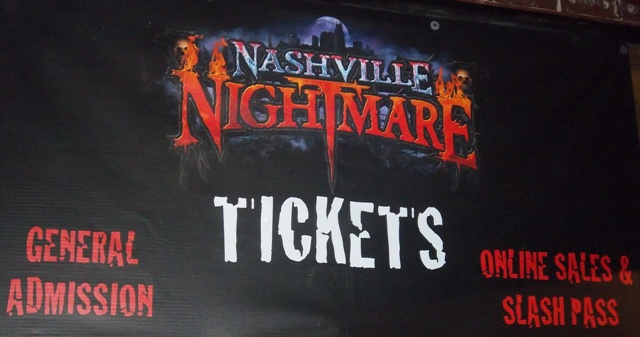 Per Matt
When it comes to indoor haunted attractions, nobody is bigger or badder than Nashville Nightmare!

Last weekend, I the good fortune to interview Special Effects Coordinator Rick Prince of Nashville Nightmare. Afterward, I found out why it is voted Nashville’s No. 1 Indoor Haunted Attraction!

There are two separate haunted houses on this property: Night Terrors and Dark Descent. Each one offers something different.

One of my rules of attending haunted houses: I prefer to visit in a group. So, I quickly introduced myself to a group of young ladies already in line (who led, naturally, to help my journalistic point of view) and we were off. It’s safe to say there were many screams on this journey.

The different room themes removed the fright from your mind, as you’re focusing on the different elements. Just when you put down your guard, you get scared. Part of what makes Night Terrors so successful is all of the sensory scares it provokes, including:

– Sounds: Many loud bangs and blasts. The indoor environment either added an echo effect (or speakers were used) to amplify their effects
– Touch: While the animatronics were effective, some sprayed water onto oncoming visitors. This was perfect during hospital autopsy tables!
– Smell: On more than one occasion, sulfur was used to stinking effect paired with decomposing corpses. The putrid stench never really goes away.
– Lights: Strobes and lasers were used to chilling effect. As soon as your eyes adjusted to the darkness, another blinding light appeared. Lasers were partnered with fog machines to create an incredibly eerie effect.

The ladies mentioned this year’s layout was set to perfection and was “a lot scarier than last year.” These ladies know terror. They attend Nashville Nightmare every year and it’s their favorite haunted attraction in Nashville. They really enjoyed the barely dressed actor named Sweet Thang (adorned with little clothing and decorated with multi-colored black-light ink) and the claustrophobia tubes paired with smoke machines and laser lighting to create the perfect storm of paranoia.

Other noteworthy aspects of Night Terrors: There were many medical experiments gone terribly wrong and some terrific costumes based on that concept. The asylum and sewer settings were particularly well crafted and the animatronics of The Headless Horseman and Crocosaurus were the best! 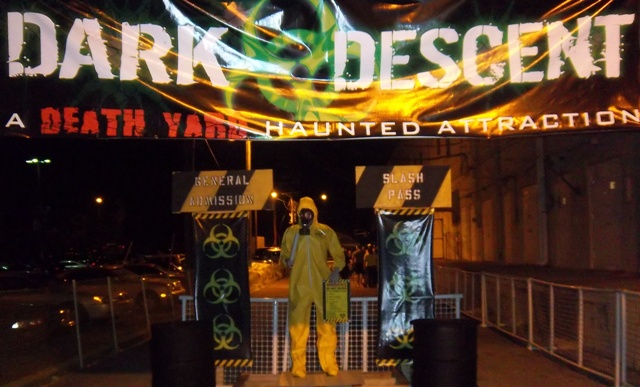 Dark Descent:
Many years after the Chernobyl nuclear accident, an abandoned Ukrainian shipping container is confiscated by the CDC. In a remote testing facility, the contents are analyzed. Codenamed: Dark Dwellers, something goes wrong and the facility is quarantined.

This portion of the attraction begins with a military briefing. Apparently, you, the visitor, will encounter total darkness and will investigate with a strobing “light-bar,” which is similar to a very large glow stick. Because that is your only source for light, all of your senses are heightened.

I partnered up with a group of Nebraska locals who were visiting Nashville, solely for witnessing the Nashville Nightmare. As a group, we got turned around a couple of times, which is easy to do in total darkness. We really enjoyed walking with a flickering glow stick. In fact, that added to the scariness factor.

There were a few noteworthy moments, including the extra-large blast door that that broke up the tour’s sections. The military soldier who debriefed us played the part well, as he updated us with our current situation ops. As he noted, “dark dwellers hate light and large groups.” He survived for a while, firing extra-loud air guns at the abominations. When we tour ended, the visitors were showered with bubbles in an attempt to cleanse the horror from you. 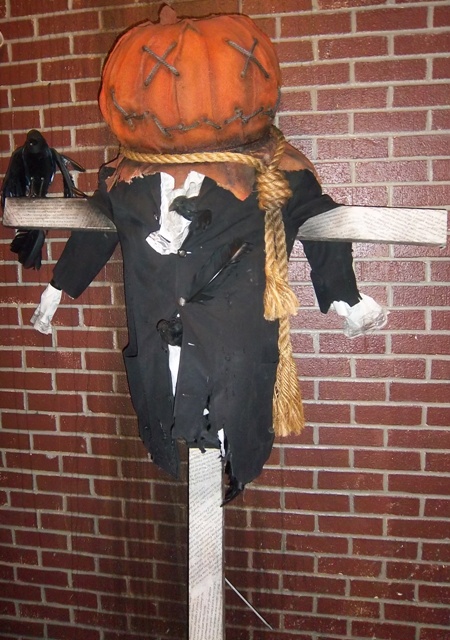 I really enjoyed both haunted attractions. Each one offers something a little different. If you’re a fan of horror (or simply Halloween), Nashville Nightmare is a must-visit! 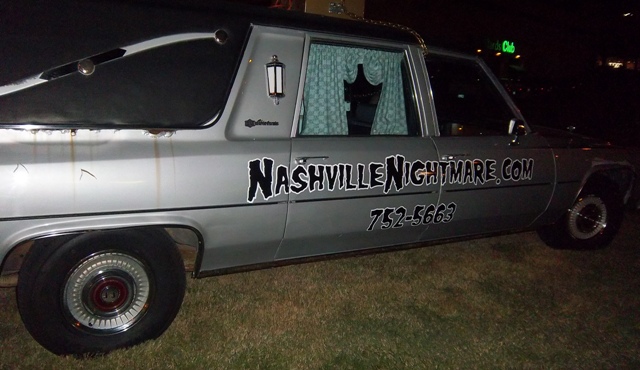