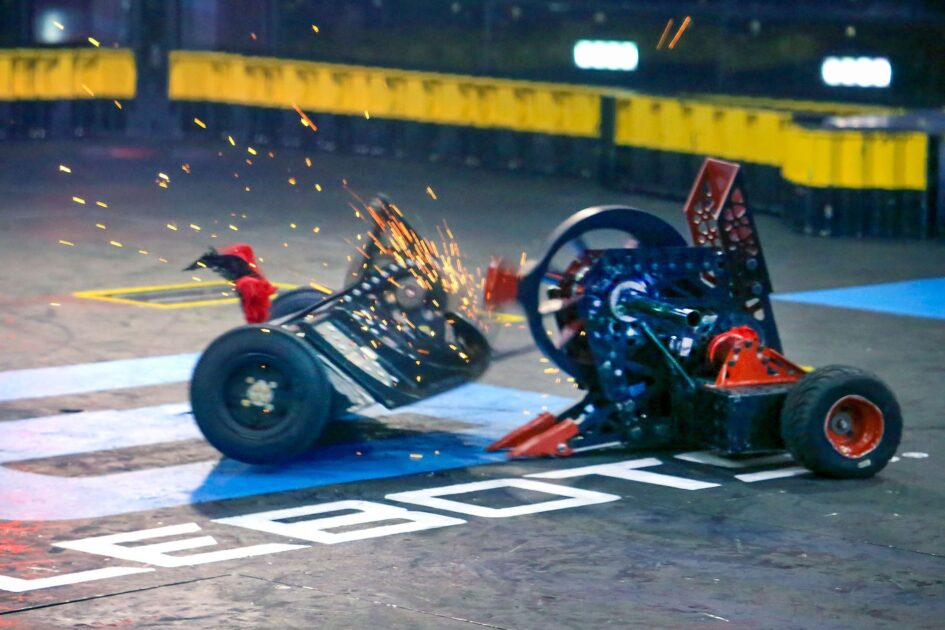 BattleBots: Champions offers a new kind of competition to the robot-fighting sport.

BattleBots brings a bonanza of bravado and battles to a brand-new show.

As a six-episode series, BattleBots: Champions culminates with the Golden Bolt Tournament, where the final three spots are reserved for past Giant Nut winners including Tombstone, End Game and Tantrum. The other five spots are “wide open,” as each team must run the gauntlet against some of the best of the best.

Each week, eight teams will battle each other before challenging a BattleBots legend. Only then can they enter the champions-only tourney.

So far, three episodes have aired. In the series premiere, Gigabyte was the legend, which Hypershock managed to slice in half! Episode 2 featured Lock-Jaw as the gatekeeper, which didn’t last very long against Ribbot — now that’s just embarrassing. I just don’t understand why Donald Hutson never updates his bot to compete with the latest generation of competitors. As a past champion, he’s always a great sport, willing to help others through their troubles, but he really hasn’t made much progress with Lock-Jaw this entire decade. He truly needs to update the vehicle and I hope he does to improve his chances in future contests.

In the third episode, Rotator gets to play the role as a “legend,” even though the bot really hasn’t accomplished a whole lot within the sport. And the rookie bot, Glitch, turned the gatekeeper into a smoke bomb, leaving gears and guts within his wake, even though the bot’s movement could barely be controlled at times. Thus, the final episode of qualifiers airs this week before the REAL action begins: The Golden Bolt Tournament!

I’ve got muted excitement for this “Sin City Slugfest” spinoff.

On one hand, there’s really no need to bring back the experimental bots as time fillers, like Double Jeopardy, Huge and Mammoth. If the producers of this show really wanted to have one TRUE tourney with only the best of the best, these battlers wouldn’t be included. On the other hand, this show brings more robot combat to the stale summer. So, there’s that.

This is definitely a resume-building competition, and I expect the last couple of episodes to definitely be the best of the bunch. It’s a tale of redemption for some, but it’s one last hurrah for others. Deep Six, Pain Train, Triple Crown, SMEEEEEEEEEEEEE and DUCK! won’t return next year (thank goodness).

First, the Good: I really did enjoy seeing the old-timers match of Free Shipping vs. Icewave. Now, the Bad: I still miss Team Bite Force (who seems to be boycotting the show due to contract complaints). Nothing has changed my opinion that he could bring in his bot from past seasons and repeat his reign as champion as soon as he agrees to return. And I hope it happens soon.

Bot Whisperer Pete Abrahamson is still grossly underused, as he brings the most experience to the show, but doesn’t often get many opportunities to discuss it. I’m still not a fan of showing very brief highlights instead of full matches (Youtube exclusives bite the big one!). And I still fast-forward through Faruuq’s fight-card intros.

I know hindsight is 20-20, but there’s absolutely no way the show’s producers could have imagined the fan reaction to the controversial conclusion of the 2021 season. Champions doesn’t remove that bad taste in my mouth, which will continue festering until the next full season begins. I don’t know what needs to be changed in order to fix the program’s problem. Should there be all-new judges brought in? Will the producers actually alter the show’s rules? Maybe we need to start from scratch with an entirely new production crew, along with contestants.

Just in case you couldn’t tell, I’m still salty about the show (but not as salty as Game of Thrones fans).

I’ll keep watching the chase for the Golden Bolt, but I demand improvements in the overall structure of next season’s BattleBots.