Beer With a Brewmaster: Hans Groberg

Per Matt
The craft-beer industry has taken flight, literally, within the state of Florida. Cigar City Brewing has built the industry’s first fully functional brewery within Tampa International Airport to greet passengers flying into and out of the Sunshine State with a quality adult beverage.

Brewer Hans Groberg is constantly developing new beer recipes to be released at the airport brewery. Currently, the airport brewery, which is housed within a 9-foot-by-11-foot room with a 12-foot ceiling at the Southwest Airlines terminal, sells more than two-and-a-half barrels of craft beer within two weeks, which is quite an accomplishment.

Following the 2016 Beer Bloggers & Writers Conference held in Tampa, FL, I spoke with Hans to discuss working in this unique environment, to find out more about the local craft-beer scene and to explore rumors of the airport brewery’s possible expansion (which may happen by the summer of 2017).

Please tell me how you got started as a brewer.
– “Before working at Cigar City, I lived out West, in Utah. I was working at Uinta, in Salt Lake City. They’re big. I’ve heard someone say they’re the biggest brewery you’ve never heard of. I used to run a 120-barrel brewhouse. I started in packaging and moved up to brewing. Straight from there, I came here. Before that, I homebrewed for about 10 years. I moved to Florida and was looking for a part-time gig. Cigar City was looking for somebody with brewery experience, who didn’t need 40 hours and it kind of worked itself out.”

From what I’ve heard, this is the first fully functional brewery inside an airport.
– “I’ve heard that as well. It’s exciting. Working with the TSA is interesting. You have to really pre-plan with your job. If you forget something, you can’t just leave mid-brew and try to fix it.”

How often do you brew?
– “We brew here, every other week, basically, per demand. We don’t go through beer super fast.”

What kind of beers do you brew at the airport?
– “We pretty much only brew one-offs and special-release beers here. Tony Jannus Pale Ale was designed here and it’s become so popular, they’ve moved production of that offsite, to the brewery. It used to be exclusively made here, at the airport.”

What’s the latest developments for this brewery?
– “Well, I actually just fully took over a few months ago, so I’m really just making it my own, at the moment, trying to get a good arsenal of recipes written, so I can be more flexible in what is selling. I talk with the bartenders a lot, because moving the beer is ultimately the goal.”

What are some of your best-selling beer styles you make at the airport?
– “We’ve had really good success with SMASH beers, which are fun. You get to mess with new hops and learn the whole characteristic of them, but also dark beers, which is weird to me. Out West, beer is very seasonal. In the hot months, dark beers totally drop off, but that doesn’t seem to be the case, here. I’m more or less planning on rotating between dark beers and something kind of fun, then back to dark beers. I also take requests.”

Have you made any fruit beers in the past?
– “Not yet, but it is a possibility. I’m a little limited in my space, so I can’t do anything crazy, like barrel aging, but I have used wood spirals before.”

What’s it like to have an actual working brewery housed inside an international airport?
– “I think it really feeds the public interest, being able to see the brewing process, more than anything else. Most people don’t understand beer; they think it’s some kind of crazy alchemy. I show airport workers all the time that beer comes from grains and they’re just baffled. I’ve worked at breweries for a long time and now, working at an airport makes the average brewery kind of boring, but I still enjoy meeting brewers, putting a name to a face is nice.”

Currently, can any TPA ticketholder visit your airport brewery before catching a flight?
– “No, because we’re behind TSA, at this point. If we were in front, I’m sure that would happen, because I would do it. I have heard rumors that Cigar City will open a second location in one of the other terminals and then expand the brewery and have the brewery produce for both locations. Once you get in behind TSA, it’s a lot easier to move around.”

How would you describe the craft-beer scene of Tampa, Florida?
– “It’s very different from the West. The beers, here, are a little bit different from the up-and-coming beers of the Mountain region. Most beers are more malt forward, here. Everybody likes treatments. Nobody really wants a standard style. When I tell some people I’m making a standard Porter, they wonder aloud what other ingredients I’ll add to it. It’s just a Porter. It’s just a beer. Eventually, I’m going to have to start adding fruits, herbs and other additional ingredients to please people.”

“The West Coast hops thing is very different. Aside from treatments and things being a little sweeter out here — and I could be wrong on this — but I don’t think Florida likes the piney, resinous hops. They’re more into the fruity, exotic, New World-type of beers. I do like the sour beer movement, out here. It seems to be right on par with the West Coast.”

What are the trending, best-selling beer styles in Florida?
– “IPAs. Basically, place the IPA label on anything and it’ll sell, it seems. I see lots of people drinking and talking about whales (the hard-to-find crazy beers), but when I go to the brewery and drink with the guys, we’re generally drinking light beers or the Guayabera Citra Pale Ale — those are brewery favorites. My favorite styles are Pilsners, followed by pale ales.”

What’s the busiest time of year for the airport brewery?
– “Winter. December through January is the very busy time of the year.”

Do you think you have more out-of-towners or locals to visit your brewery?
– “The customers I’ve talked to are local, but following the brewery online and on Untappd, there’s a fair amount of national patrons.”

Is there anything else you’d like to add?
– “Cigar City is great. I understand why they’re such a big name. It’s a real tight group… a happy, little family. It’s good to be a part of.”

“Also, I love when people stop by, so if you’re in the Southwest terminal, stop by and say, ‘Hi.’ We’ll have a beer.” 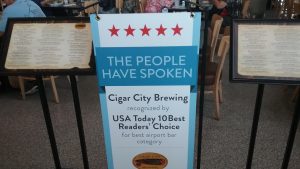