Black Widow Drives Home That MCU Phase 3 is Over

We all knew it was coming. The end of the Marvel Cinematic Universe Phase 3 has technically been over ever since WandaVision made its debut on Disney+ earlier this year. It should shock no one that once Steve Rogers hung up the shield and Tony Stark valiantly sacrificed himself, we would have to move on to new characters. But it still didn’t feel like it was truly over. We could hold onto those characters we have grown to love, hoping that in the multiverse that is Marvel somehow, someway they would make their way back. The first three phases of the MCU did not feel complete.

Not until Black Widow came along.

Natasha Romanoff is one of those characters from the vast Marvel Comics Universe that I can honestly say I did not care about in the least prior to the movies. The team behind the films of the MCU deserves a ton of credit for making almost every character they have introduced mean something to the public. Prior to Doctor Strange, I was not a fan. Prior to the release of Guardians of the Galaxy, I couldn’t tell you who Star-lord, Gamora or Groot were. Who the hell would care about a guy with no superpowers and just a bow and arrow? Not me, prior to seeing Hawkeye in films (DC should learn something from this, ’cause I could still give a rat’s ass about Green Arrow).

They made me care for these characters, including Romanoff. It’s not just me, but almost every single person who has seen the MCU phases up until now would agree. Every single director deserves accolades for that accomplishment.

With the release of Black Widow, the MCU is now fully entrenched in Phase 4. Black Widow is kind of the bow on the top of the gift. While it nicely fits back into the first three phases, it leads us on triumphantly into the new dawn. A new world. Even a new universe. I am sure we will see some of the characters we loved from Phases 1-3, but Black Widow is designed to be the closing of that chapter and the start of something new.

Black Widow picks up after the events of Captain America: Civil War. Natasha (Scarlett Johansson) is on the run after siding with Steve “Captain America” Rogers’ group. However, she is tracked down by her pseudo-sister Yelena (Florence Pugh), leaving her with vials of a chemical designed to remove the mind-control drugs given to spies by the people behind the Red Room, a training ground for Black Widows. After being attacked by a highly deadly member of the Red Room called The Taskmaster (Olga Kurylenko), Natasha and Yelena track down their childhood caretakers Alexei Shostakov (David Harbour) and Melina Vostokoff (Rachel Weisz). Together, they plan to put a stop to the Red Room and its head, a man known as Dreykov (Ray Winstone). 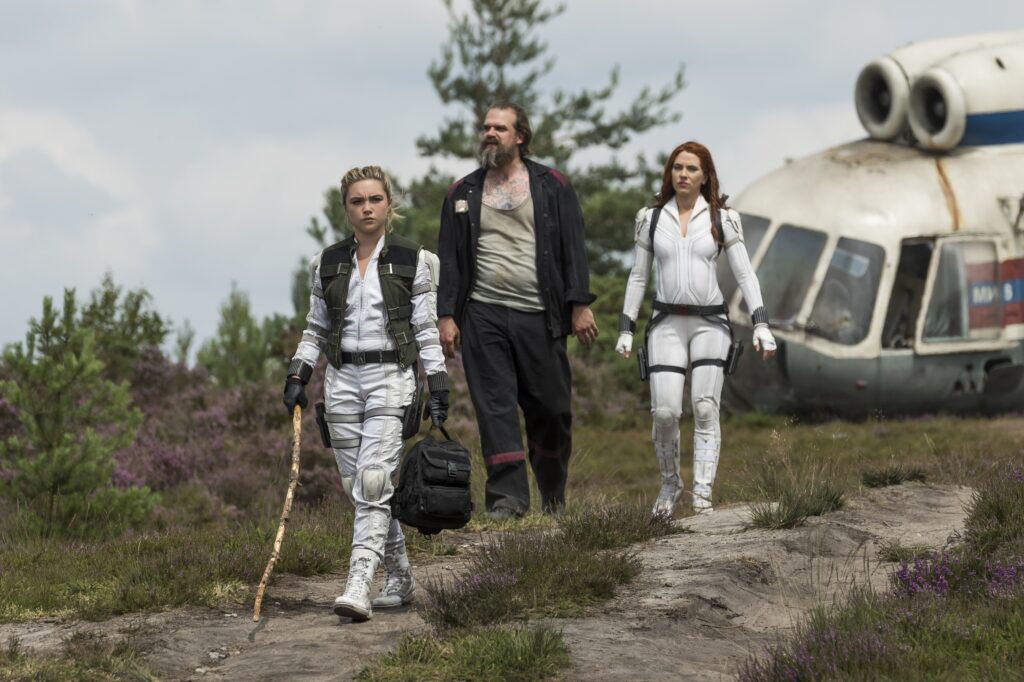 Black Widow takes us back in time. We know that Natasha sacrifices herself on Vormir to recover the Soul Stone during Avengers: Endgame. And since her sacrifice occurred outside the actions of the Infinity Gauntlet, she remains dead in the main timeline (if you don’t believe me, check out the post-credits scene in Black Widow). The film gives a moment to go back and remind viewers just how badass Natasha was. She was not your normal spy. She had been trained since a child to be the ultimate undercover agent. Black Widow truly was the female equivalent of James Bond. And in some cases, even more potent.

Sadly, though, for me, this means that we have to go into new territory in the MCU. The old guard is gone for the most part. We will still have Thor and the Guardians and Doctor Strange, but it feels like the essence of the cinematic universe is gone. I knew it was going to change when I saw the lineup for Phase 4, but in all honesty, it did not hit home until seeing Black Widow. The heroes that have been a part of our lives for so many years are gone. The new crop of films have some big shoes to fill. But right now, I just do not feel excited about what is to come.

The Marvel directors have proven to be good at getting stubborn people like me onboard with the new movies. Guardians of the Galaxy was a fine example of making something out of nothing. Maybe they have magic in the bottle again. Maybe I will come to love everything in the new phases. We will just have to wait and see.

Black Widow is an amazingly good film, worthy of five out of five stars. Just wish it had not reminded me so much of what is finished with the MCU.