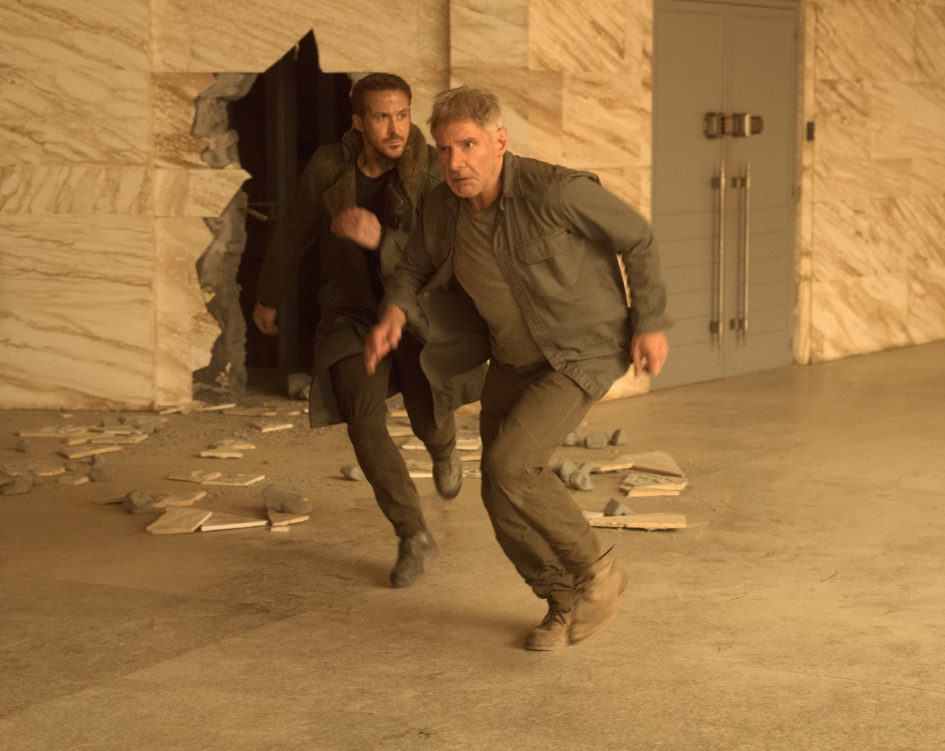 Per Matt
With replicants returning to movie theaters after a long hiatus, will this weekend’s box-office results mimic those of 1982? Or will October follow the lead of the largest U.S. September box office on record, with a familiar film leading the pack?

One way or another, Blade Runner 2049 seems to answer that question, returning to Philip K. Dick’s sci-fi source material 35 years later as a big-screen sequel. Based on the characters of Dick’s novel, Do Androids Dream of Electric Sheep? Blade Runner 2049 builds upon the established storyline and creates a complicated film noir/neo noir that delves into breakthrough technology, family secrets, self-aware artificial intelligence and a dying planet that could totally wipe out humanity.

Unfortunately, I am not at liberty to discuss any spoilers, whatsoever. At a recent media-only screening, a press release was read aloud by 2049 Director Denis Villeneuve, requesting that all of the plot twists and intricate details of the movie would unspool for moviegoers inside the theaters, not in reviews. And I’m happy to abide, but that leaves very few elements of the movie that I can write about. I’ll give it a shot, though.

There’s plenty of red herrings and surprises that ultimately create more questions to be asked (with very few answers provided) in this long movie (clocking in at 163 minutes), along a familiar cameo or two, as well. There are many long-panning camera shots showcasing the environment, forming a very similar mood and tempo of the original movie. Although a tad confusing, I highly recommend watching the three short films that are related to this movie, which end up explaining quite a few events that are important to the storyline. I actually enjoyed the soundtrack more than the film, which featured familiar-sounding synthesizer-rich immersion music.

Fans of The Walking Dead will notice a familiar face. Lennie James makes an appearance using the same “American” accent he speaks in the undead TV show. Essentially, he’s Morgan in this film.

Can we expect another sequel? The way things wrap up, it feels like there’s a pretty good chance. Fanboys and girls of the original cult classic should enjoy this one, but newcomers to the franchise will probably stay away. And that’s a shame, because Villeneuve does a decent job helming the movie, although this will be compared to the speed (or there lack of) of the developing storyline in the original as well, which isn’t fast at all.

After watching last year’s Top Two movie of the year, Arrival, which Villeneuve also directed, we had high hopes he could create an up-tempo storyline that kept us on the edge of our seats. That never happened, trying too hard to stay true to the snail’s pace of the original. We can only wonder if the rumors are true that Ridley Scott isn’t directing this movie because he chose to helm Alien: Covenant instead, which was filming around the same time.

Seems like both movies could have been improved if only Scott had swapped his filmmaking decisions between the two movies.

Returning to a familiar storyline (and filming style) worked all right for Star Wars: The Force Awakens. Maybe it’ll happen for Blade Runner 2049 as well. Or maybe the box office will be another disappointment for this underappreciated franchise. Only time will tell.