Gerald’s Game is the After-School Special of Horror Films 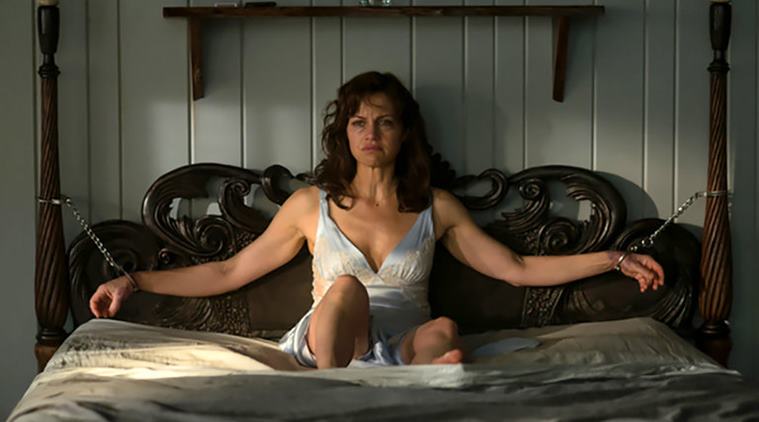 Sometime during the ’90s, I read Gerald’s Game. I never particularly liked the book, although it wasn’t terrible. It was just never one of Stephen King’s more horrifying novels. It reads much like a  really well done Lifetime movie, and the film adaption stays true to the book.

I’m pretty surprised at how well the film is adapted. If you have read the book, you no doubt wanted to see exactly how this was going to play out on screen. Director Mike Flanagan pulled off an almost impossible feat, to be honest. Much of the film takes place in the mind of the lead character, Jessie (Carla Gugino.) Jessie goes off for a long weekend to an isolated cabin with her husband, Gerald (Bruce Greenwood). He decides to act out on a new sexual game with her, a sleazy rape fantasy where he handcuffs her to the bed and then proceeds to have a heart attack. Unable to break free and with no one around to hear her scream, Jessie quickly loses her mind.

The film is, of course, a movie about domestic abuse and what it means to be a feminist. Both the book and the film oversimplify female empowerment and the fear of instability many women have, sometimes at a great cost to their souls. Jessie is trapped, she has always been trapped, and it has always been her fault and not her fault at all, at the same time. As a King fan, I have always liked his works, while at the same time realizing he doesn’t quite get women. The mark is just slightly off. The film has some insight, but he treats the younger Jessie more like an 8-year-old, rather than a 12-year-old preteen. This is a mistake King often makes with his younger female characters.

This doesn’t mean the movie isn’t good or that the novel also isn’t good. It just has a pop-culture filter that seems like a Saturday afternoon film you might throw on while folding the laundry. Tense, but also preachy at times. The more interesting question isn’t really about her life of mental abuse she has suffered, but what one would actually do, stuck in that situation. I’m far more interested in her resourcefulness and determination to live. This film almost could have been a Hitchcock duplicate, with a few changes here and there. Flanagan and Hitchcock both succeeded to pull hand-shaking suspense from a person in a one-room setting.

The film is gory. It isn’t scene after scene of bloody gore, but what you do see will keep you away from any 50 Shades of Grey fantasies you might have for a few years to come. To put it plainly, I have been watching horror movies since I was a child and I rarely have to leave the room during a scene. Gerald’s Game made me first pause the film, in order to contain myself, then decide to just get a drink until the scene had played out. It may play like a Lifetime film, but it’s like one with a firm R rating for that scene alone.

I give Gerald’s Game four stars out of five, for having one of the most intense scenes of gore I’ve ever seen. Gerald’s Game is now playing on Netflix.