Soaking Up the Environment of Blue Planet II 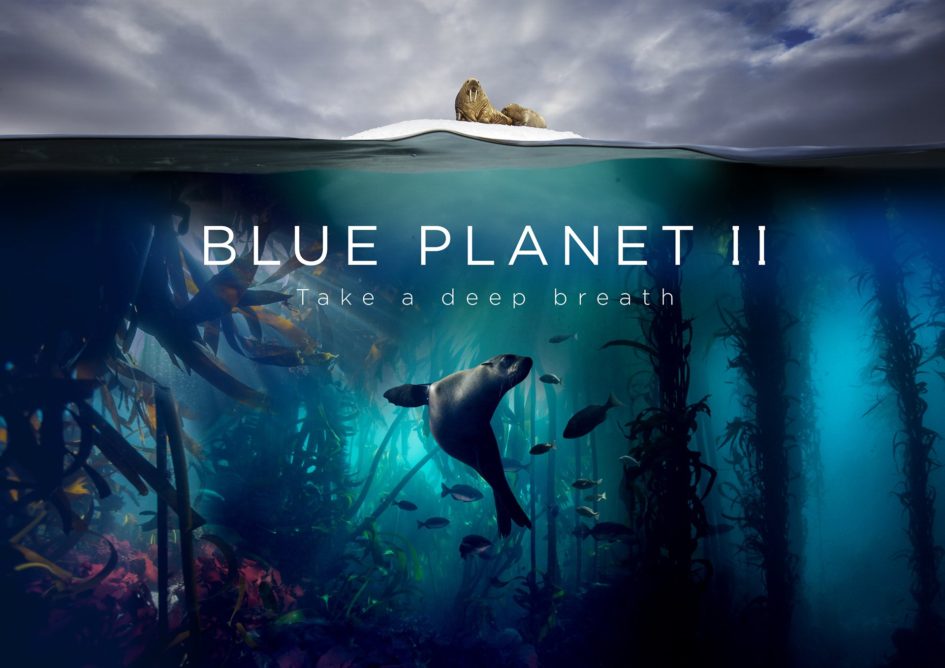 Just for fun, from time to time, I’ll take a break from horror and pop-culture programming and actually watch TV shows simply for the visual wonder and awe-inspiring nature of its subject matter. Blue Planet II is that kind of program, which transports you to another place, one which you’d otherwise never get to experience… even though each location can be found within our same homeworld.

The 90-minute series premiere was four years in the making, having crews exploring every ocean, bringing a new understanding of life beneath the waves for our viewing pleasure. State-of-the-art low-light cameras producing no bubbles or noise filmed peaceful, violent, brutal and beautiful scenarios in “One Ocean.” The incredible camerawork featuring high-res details are a sight to behold. Super-slow motion was used to showcase crashing waves, underwater creatures and storm-driven winds that would otherwise wipe out a coastal city.

Surfing bottlenose dolphins, leaping Mobula rays, giant trevally fish that feast on low-flying terns, tuskfish that actually uses tools to crack open clams for a meaty feast, Japan’s underwater forests during breeding season, Northern Norway’s fjords filled with billions of herring (and the thousands of orca that follow them) and older female Kobudai fish switching sexes are only a few of the subject matter in this single episode. One of the most interesting topics to be captured was a pod of false killer whales, initially hunting for dolphins, later turns out to be communicating with their prey. It seems at some point, these creatures actually knew each other. Together the inter-species group eventually hunts for fish together in a rare sign of unity that scientists don’t fully understand why it happens. This small sign of unity can even offer hope for humanity.

Another highlight of the program includes desperate walruses and polar bears trying to survive in the Arctic as each one looks for food and shelter for their recently born offspring. Hints of climate change are sprinkled into the storyline, but it’s not enough politics to ruin the overall experience. David Attenborough appears briefly onscreen, but mainly functions as the narrator, staying to the point while describing what’s happening, but his vocabulary is succinct enough to not take anything away from the main action. There’s great music that’s included with the program that really enhances each situation.

The final subject matter shown in this episode includes the program’s cameramen filming on larger-than-expected waves. These, along with other behind-the-scenes shots were very informative.

Apparently, Blue Planet II is both a sequel and a reboot to the original groundbreaking series, which also featured Attenborough. This is actually an eight-part series that will include more great nature images. There really aren’t a ton of pop-culture comparisons that can be made with this series, but Disneynature is one, along with different programs found on public television. Be diligent searching for this show, though. My DVR listed the program as Planet Earth: Blue Planet II, while IMDb and other services simply list it as Blue Planet II. I don’t regularly get BBC America in my cable programming, but when I do receive it as a brief preview, I tend to really enjoy watching it. You should, too. You’d be doing yourself a disservice by missing this show.