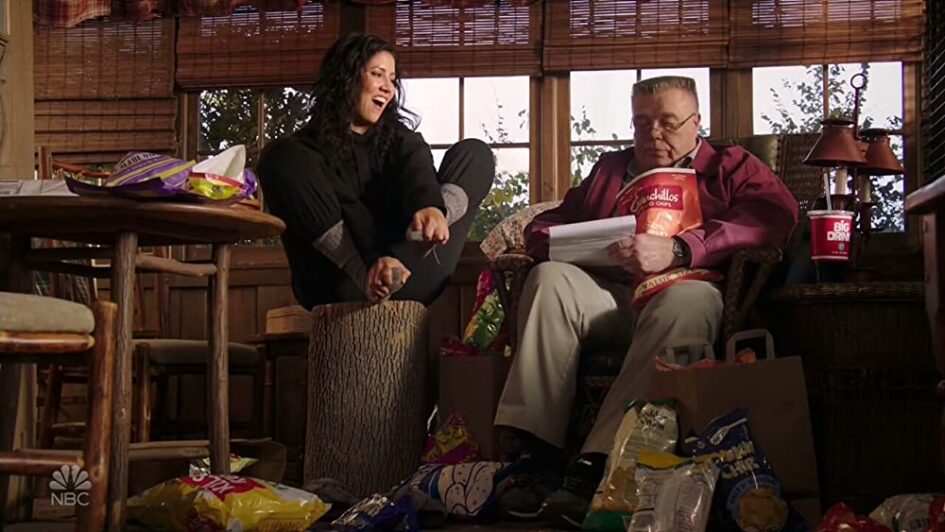 The final season of Brooklyn Nine-Nine has finally arrived. Time for a potato chip party!

Per Matt
A funny thing happened between Season 7 and Season 8 of Brooklyn Nine-Nine: Real life. While the Coronavirus may have delayed the series’ production schedule pushing back the current season premiere a little later than usual, that wasn’t the only thing influencing the workplace comedy. Police brutality and racism were confronted head-on in “The Good Ones” and those topics carried over into subsequent episodes. If that doesn’t sound like a laughing matter, have you even been paying attention to current events?

Long before Season 8 aired, the entire cast and crew released a statement that was meant to support the Black Lives Matter uprising, apologizing for showing officers in a helpful (and usually funny) viewpoint, while also donating money toward the group’s defund the police movement. I immediately realized this political polarization would be the show’s last hurrah.

After watching the first four episodes of the final season, it’s very clear that its writers, producers and showrunner have kneeled to the stars’ demands, sacrificing light-hearted jokes that earned the show a couple of Emmy wins, multiple Critics Choice Awards and a Golden Globe statue for politics that will only divide its audience.

Three years ago (Has it been that long, already?), I was so excited that NBC had picked up Brooklyn99 after it was canceled on FOX. I’ve long been a fan of Andy Samberg and this show absolutely cracked me up. It’s a workplace comedy that’s best when it doesn’t deal with the outside world, but focuses on the wacky, zany scenarios that can only happen to these characters, and no one else. But as soon as they became political activists, I immediately lost interest, tossing out all of the years I’ve supported the show. Somehow, I slogged through the first four episodes, which is practically the mid-season point, as NBC reduced its total episode number to 10.

Catching up: Hitchcock has retired (but actor Dirk Blocker still shows up via FaceTime), Santiago had her baby, Rosa quit the force in order to justify BLM causes and Boyle is constantly offering reparations. Within the first five minutes, nonstop racial issues are in your face with very few jokes in their place. Conflicts within the police union bring in the great John C. McGinley, whose role is meant to mirror real issues. But the world REALLY has changed when Brooklyn Nine-Nine isn’t very funny…

Luckily, there’s a couple of episodes that will remind viewers how Brooklyn99 used to be great. The show is at its best when Peralta geeks out about pop-culture topics, when Santiago’s dorkiness shines through the department’s gruffiness, when Boyle gets to decode riddles and whenever Terry refers to himself in the third person — Tiny Terry actually deserves a spin-off series!

But one of the best story elements happens whenever Jake gets a nemesis played by a great scene-chewing guest star. This time, Johnny Franzia received the recognition, but I really wanted to see Doug Judy (as played by Craig Robinson) one more time before it all ends. It’s also unfortunate that Chelsea Peretti hasn’t made a guest appearance yet, but there’s still some time remaining for her, yet…

Brooklyn Nine-Nine can still bring the laughs… but only if the politics are paused.

And if the final season wraps and there isn’t one more Halloween heist for me to break down through multiple viewings, I may disown this show entirely.