Campaigning for a Brighter Future in The Purge: Election Year 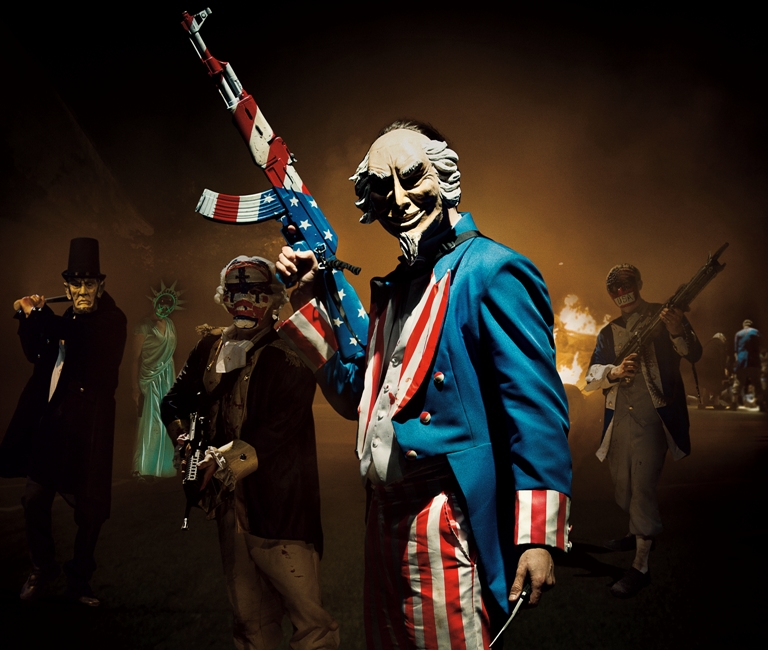 Per Matt
Give me your tired, your poor, your disenfranchised masses… In 2025, those individuals are yearning to break free from oppression. In a strict world full of harsh rules, one night a year offers complete lawlessness for everyone to release some aggression. This time, it just happens to lead up to a brutally contentious campaign for two hopefuls sparring to become the next President of the United States. This is the setting for The Purge: Election Year.

Politics is no stranger within this horror franchise. Each of the three Purge movies have played out like revenge-filled political satires, although this one feels different from the others. Election Year doesn’t attempt to hide the fact that it speaks to the corruption of elected leaders, religion and the upcoming 2016 U.S. presidential election. In fact, in more than a few scenes, it feels like art is imitating real life.

A tight election calls for fewer restrictions during the Purge. Of course, this leads to an assassination attempt on U.S. Senator Charlene Roan (Elizabeth Mitchell), who’s approval rating is rising quickly with her anti-Purge platform. Leo Barnes (Frank Grillo), her head of security, is the only person she can count on as the two attempt to ride out a rough night on the streets while dodging delinquents, gunfire, murder tourism and a hate-filled paramilitary group.

What’s the big deal with Election Year? Having just watched The Purge: Anarchy only two days before attending a screening of this sequel, quite a bit has changed. Unlike Anarchy, Election Year does not have much continuous tension throughout the film, but does feature a few good jump scares. However, the two movies do share one great character, Frank Grillo’s Sergeant. This vigilante-turned good guy was the highlight of the second Purge movie, but here, he doesn’t have much material to work with other than protecting the senator. The script never quite frames this straight-laced character outside the rescue of other characters and that’s a shame. He doesn’t even get any good one-liners (Mykelti Williamson gets them all). It feels like a wasted opportunity for Grillo, who’s performance is great in both films.

Sadly, there’s just too many moving parts in this movie, including too many subplots and quite a few unnecessary characters that are difficult to differentiate. Also, there’s not much subtlety in the screenplay. When watching movies, I prefer to read between the lines of dialogue to figure out the motivation for different characters. I don’t need to be beaten over the head with it, on multiple occasions.

Is this the finale for The Purge franchise? If past movies are a predictor, you can expect many more (possibly another trilogy). Each one was filmed with moderately low budgets and reportedly, this one only cost $10 million. That’s dirt cheap! As the movie is released around Independence Day, featuring a war of words between presidential candidates that mimics real life, it’s quite topical and most likely will make a lot of money. If there is a sequel, I hope it follows Betty Gabriel’s rough-around-the-edges ambulance driver, Laney Rucker. Her character shows she has a heart of gold, but can also hold her own with the miscreants on the streets.