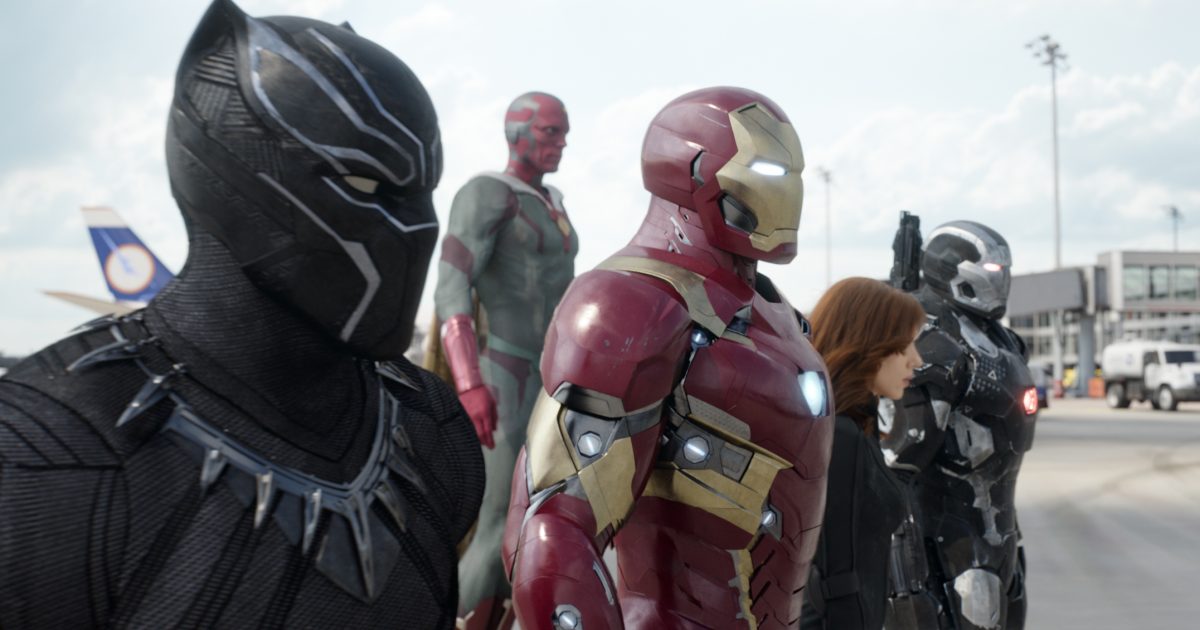 Well, it’s here. I guess I could sound more enthused about Captain America: Civil War coming out this weekend, but the first trailer for the movie was released late last year and in the months since, I could repeat every line of it from the exposure it’s gotten. Not to say that the movie will be bad, it just builds six months of hype rolling like a freight train into theaters all over the world this weekend.

Every Marvel release is a blockbuster, through and through. Producers would be asinine to try to bank off releasing a film on a Marvel movie weekend. This one is a little different, however. Like The Avengers, audiences are expecting a little more, once the stars come together. When the heroes explore a dynamic together, they become something different. This is the beginning of a split between those we call heroes, that asks us to choose a side. Just as families were torn apart during the American Civil War, Captain America: Civil War asks us to stand for what we believe in and thusly turn our back on heroes we care about. The Avengers movies got a lot of hype and were both decent — despite the publicity — but if Civil War doesn’t live up to its own hype, it might be the biggest letdown, ever.  If they do it right, though, it would certainly shake up the MCU for years to come.

First thing’s first: You may ask what’s all the hubbub about, anyway? Why are the heroes turning on each other? Well, because of the actions of super-powered people, the government and the public believe they are too powerful to leave to their own intentions. In the Marvel Comic Universe, a group of super-powered teenage wannabes end up going haphazardly into combat with a gang of foes for their reality TV show, which ends in a villain’s explosive powers going off in a schoolyard filled with children. In the film, it looks like Bucky Barne’s actions from The Winter Soldier are to blame. Either way, the government wants them to reveal their identities, go through training and generally be held accountable for anything they screw up. Some think it’s a good idea, like Tony Stark. Others think it violates their civil liberties, like Steve Rogers. And when you pit two natural leaders with strong ideologies against each other, others will follow. Even though we have seen the likes of Spider-Man and Black Panther in all the commercials that have aired recently, we should expect more to make appearances. Between the pages, a great number of heroes make an appearance. Some unexpected faces or masks will appear somewhere on those reels.

We can expect a lot of bruises being doled out from both sides. What viewers may not see coming is the possibility of a hero’s death. It would be a bold move by Marvel Studios, but they killed off Quicksilver in Avengers: Age of Ultron, so it’s possible. It’s hard to say if it’s considered a risky move, though. Quicksilver appeared in X-Men: Days of Future Past and will also be in X-Men: Apocalypse, which releases later this month and doesn’t even conflict with continuity, since those movies take place during Quicksilver’s teenage years. So, would the risk be worth making to kill off Cap or Iron Man? Probably not, but don’t be surprised if Bucky or Black Widow or another low-key character doesn’t make it out alive, at the end. If a character named William Foster emerges, expect Thor to go overboard and kill him when he has grown 20 times his size. At least, that’s what happens (albeit with Thor’s cyborg clone) in Volume One of the Marvel comics series.

With great storytelling and artwork, the comics actually do pose a lot of great scenarios that would make fans gush at seeing them on the big screen. One such consequence would be what happens when all of Marvel’s supervillains aren’t kept at bay, while every vigilante within America’s borders is working against each other. The comics depict S.H.I.E.L.D. agents using tagged villains to round up the rebels en masse. So far, it doesn’t look like that is a likely outcome in the movie. Surely though, we will see some baddie taking advantage of an unprotected world. Though, if the result of everyone eventually making up with each other is because they must team up against a villain in the end, it will be a major cop-out. A supervillain’s role in this movie could very well be just to set in motion a master plan that may lead to events in another movie. We just don’t need anything resembling heroes hugging it out after tag teaming on some almost too-powerful entity. This divide should be something that can’t be easily fixed. I want heroes that will stand behind their convictions, which will define their characters until the end of the Marvel Cinematic Universe. The events that occur will change how heroes operate forever, which will leave some heavy scars and burned bridges. Some members will switch sides. Some will stab each other in the back. No matter what, absolute chaos will ensue.

Civil War will be a true testament to what Marvel Studios can accomplish. Using a different and modern storyline, it will shape the Marvel Cinematic Universe, from this point on. Someday, in the distant future, either The Avengers or Civil War will be known as the feature film that redefined Marvel movies.