Catching Up On: Star Wars: The Clone Wars 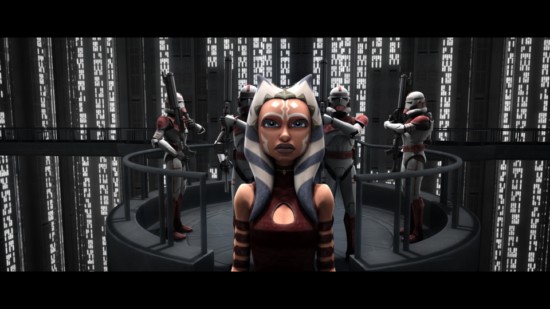 The Fall of Ahsoka occurs within the Season Five Finale, “The Wrong Jedi.” But what direction will Star Wars: The Clone Wars head next?

I’ve been a Star Wars fan all my life. I much prefer it to its celestial sister, Star Trek, but I can enjoy both series. It’s been a while since I’ve been absolutely riveted with the overall mythology as I am now with the TV show, Star Wars: The Clone Wars.

George Lucas did an amazing thing, with the creation of the original trilogy. I cannot state any plainer how much I am in awe of those three movies. Together, they tell a great story. And individually, The Empire Strikes Back may be the best of the bunch. However, the prequel trilogy did more to dilute the overall mythology as a whole, than to expand its storytelling. The one good thing it did do: bring back the Star Wars fanboys (and girls) who had moved onto other more important things with a TON of hype. Years and years of build-up and wanting more, that could never be fully satiated.

Whether or not George Lucas had admitted in the ’80s that Star Wars would live on in nine movies (or three separate trilogies) is up for debate at a later time. But with the creation of The Clone Wars, he was able to return to his creation and tinker with his toys, as he wished.

At first I was hesitant to become a Clone Wars fanatic, since I already knew the outcome of the series. What began as an in-depth look at the lives of Anakin Skywalker and Obi-Wan Kenobi soon became the storyline of Ahsoka Tano. By Season Two, it was clear the direction of the show. And at this point, George Lucas, who hadn’t been very involved with the show, quickly took over (although technically, Supervising Director Dave Filoni is still running it).

The Clone Wars has had its ups and downs, but when it started re-writing subject matter previously discussed in the Extended Universe (such as the Mandalorians and the Death Watch), fanboys were in a nerd rage! George Lucas later declared this show is canon and EU authors (such as Karen Traviss) were in an uprorar. I loved the drama, as discussed on my favorite podcast, The Forcecast.

Since then, the uproar has somewhat settled, and I wasn’t too thrilled with the direction of the series. Then, Darth Maul was resuscitated, and I was happy again, as a big fan of The Dark Side. But with the recent deaths of one of my faves, Savage Opress, and to a lesser extent, Satine Kryze (who I thought was Hitchcockian MacGuffin, all along), I felt ambivalence returning… until today’s episode, The Season 5 Finale, The Wrong Jedi.

The Fall of Ahsoka is now complete, after a four-episode arc. It may have taken five seasons, but the TV show is finally focused. I could’ve skipped the previous FOUR SEASONS, and begun here. Years ago, The Forcecast predicted The Clone Wars would be remembered as Ahsoka’s story, if nothing else, and Jason Swank and Jimmy “Mac” McInerney were correct. Big Shout-Out to you guys!

Where will this story go next? It’s unknown, however, I hope it strays a bit from the Jedi Council and feuding Republic, because we already know how that story ends. And as I attempt to look ahead, I vaguely remember Filoni and the guys speculating the show would only last five or six seasons. Yet here we are, at the conclusion of Season 5.

The show began with an adolescent’s outlook of the Star Wars Universe, and has eventually grown a bit darker, dealing with serious subject matter. Ahsoka is now a little wiser and all alone, with the Jedi Council wrongly expelling her. While I appreciate the Bad Guy Characters a lot more in this setting, I hope they do not become sympathetic (since that was one of the many downfalls of the Prequel Trilogy).

I tend to lean on Jason and Jimmy Mac for their extended Star Wars knowledge, but they’ve now moved onto create a show of their own, the new podcast Rebel Force Radio. Time to ready my iPod. I’ve got a lot of catching up to do. And a new podcast subscription to make.

Now, we’re back on your side, and we can’t wait to watch the future adventures of Ahsoka. So…

Here’s Looking At You, Kid!