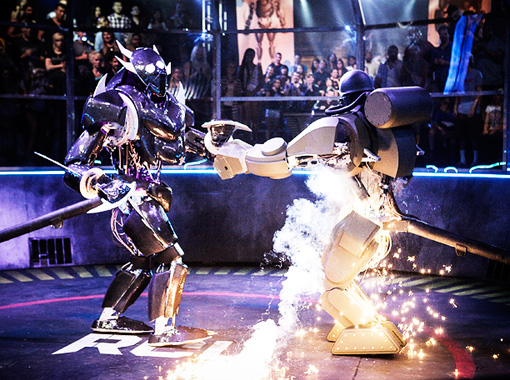 It’s been 11 years since a robot-fighting competition has graced basic cable, so it wasn’t a minute too soon for Robot Combat League to make its grand entrance.

And what a spectacle it makes. If you have a short-attention span and like sparks flying everywhere, body parts littering the ground and hydraulic fluid uncontrollably spraying everywhere, then Robot Combat League will be right up your alley.

Robot Combat League offers its winner a $100,000 grand prize. The competition consists of 12 teams of two people (a Robo Tech and a Robo Jockey), who are seemingly reenacting a real-life Rock ‘Em Sock ‘Em Robots battle. Former WWE wrestler Chris Jericho performs as the show’s host, because with all the acting involved in professional wrestling, he should be sufficiently qualified in robotics, right?

Robot Combat League is an unscripted sporting event that is equal parts boxing and Geek Squad. I was afraid the show would be broken down into jocks vs. nerds or even worse, men vs. women, but I’m happy to report that so far, that isn’t the case. Competing in the first season are:

Before the fighting begins, Setrakian takes the competitors through a Power-Up Challenge, which is a sort of robo boot camp, used to determine the fighter’s seeding. All contestants have two days to train before the big battle and there were some fun facts that popped up during opportune times, sort of like VH1’s Pop Up Videos. This I liked.

The Top-Ranked Team Steel Cyclone, was upset by Last-Ranked Team Crash, which is a father-daughter team. The outcome almost felt rigged, but it’s impossible to know the truth. There’s so much bad dialog being spoken, I feel like the producers are feeding the competitors super-cheesy lines on purpose. Also, there are too many extreme close-up shots from the robots, which the viewer can’t tell what’s happening.

My brother witnessed a robot battle last year at the Geek Media Expo Vol 4 and years ago at DragonCon, and can’t wait to watch it live again!

Strength: Robots go SMASH!
Weakness: Too many extreme close-ups. Please zoom out.
WTF Moment: Having a non-fighter use a 1-ton robot as a fighting machine is difficult to watch.

Notable Quotes:
– “You’re all about to become superhuman.”
– “A little explosion of white fire came shooting out of the side of it, which is not something I wanted to see.”
– “He’s big and black like me.”
– “I want to go in and break stuff.”
– “It’s one step closer for world domination.”
– “At the end of the day, blood is thicker than hydraulic fluid.”