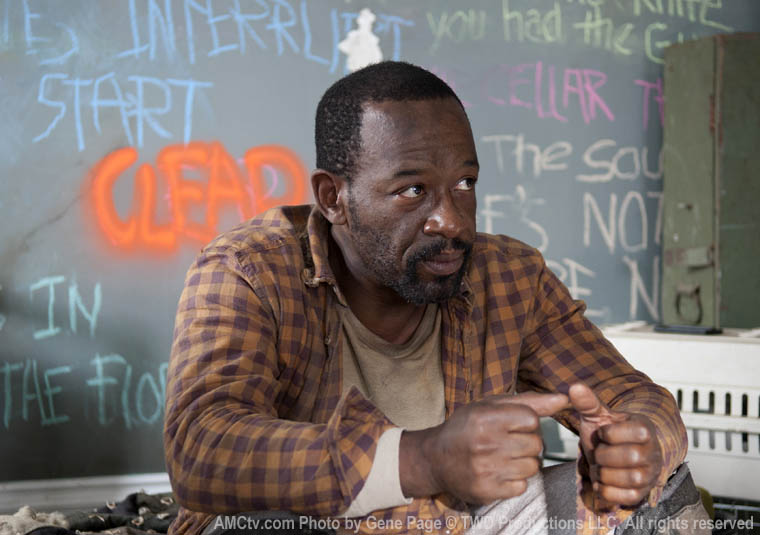 Did somebody say road trip?

As we embark on this episode’s road trip, Rick, Michonne and Carl ignore a lone hitchhiker as they make a supply run. There’s a reason some random actor got a couple lines of dialogue. Foreshadowing predicts he’ll wind up in Rick’s Gang by the episode’s end. This all-new Rick may be haunted by ghosts, but his emotion for the living (which used to be his strength), or there lackof, has been blatant lately.

Rick still distrusts Michonne, which is frustrating. He’ll easily jump into trusting friendships with everyone at Hershel’s Farm, but doesn’t trust someone who has shown her loyalty to Rick’s Gang and will fight for them on a daily basis. Something’s gotta give.

Lack of weapons and ammunition are the cause of this road trip, yet there’s none to be found at Rick’s old police station. I can’t believe a quick hop into the car from The Prison and he’s back home again. It took all of Season Two to get to Hershel’s Farm and then to The Prison, but with a snap he’s traveled through hyperspace in a jiffy?

Spray-painted notes and directions from the living take center stage in this episode, ripped from the console of the videogame, Left 4 Dead. I like it. I hope it continues in The Walking Dead. The scavenging trio invites themselves into a seemingly occupied and fortified area, hoping to get a local bartender’s hidden weapons cache. Confronted by a lone gunman, they take him down… who reveals himself to be Morgan!

I’ve been desperate to find out what happened to him after the pilot episode, but wish it wouldn’t have taken this long for him to make his reappearance.

The secret word for this episode is BOOBY TRAPS! I don’t know why they haven’t been implemented before now, but I sure hope they continue to be used. With the traps, body armor and overall tone of this enitre episode is feeling eerily like a video game. And that’s not a bad thing. But I hope it’s not like this for every episode.

Carl has grown too big for his britches, yet again, wanting to do everything alone. But he’s gotta learn his lesson, somehow. Hopefully it’s sooner, than later. I’m tired of his character, already. Turning the tables, maybe it’s Rick who actually needs the help, more than his son.

After speaking to Morgan, Rick reveals the TV show’s actual timeline. Morgan saved Rick’s life exactly one year ago. Even though this is Season Three, it’s only been one year from the pilot of Season One to this point. Interesting.

It’s nice to see that during the Zombie Apocalypse, at least one African-American survives. But there’s still enough time left to inexpicably kill every black character in The Walking Dead… but please refrain from it, Showrunner Number Three: Scott M. Gimple.

And the Easy Prediction Comes True: The Hitcher is picked up!

Strength: Morgan’s Return!
Weakness: Morgan’s Departure!
WTF Moment: It sure looked like Rick got stabbed in the heart. In actuality, it was his shoulder.