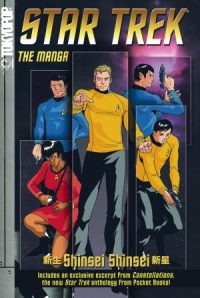 Celebrating 40 years of Star Trek, this is the first manga anthology, created by Tokyopop. Star Trek: The Manga Volume 1, Shinsei/Shinsei offers five new stand-alone stories, each one could be considered a new episode.

1. In Side Effects, the crew deals with a new race, one which has other species spliced into their DNA, and cybernetic implants grafted onto their nervous system. Could this be an epic introduction of The Original Series to The Borg?

2. With Anything But Alone, a distress call by a once-thought-dead culture arise from a lone survivor, who has a brain that can create (or re-create) an entire colony, based off his memories. But will he use that technology for good or bad?

3. ‘Til Death features the crew acquiring two mysterious sarcophagi on an uncharted planet and then a dramatic battle of the sexes erupts, practically destroying The Enterprise.

4. Oban is a once-extinct peaceful creature that turns awry during a ceremonial transport mission, and the creature poses more of a threat than originally thought.

5. Orphans – The Enterprise escorts a non-military Lowarian race and their cargo freighter but get attacked by raiders in Gundam-styled Mech robots. Will cooler heads prevail?

6. – First, Do No Harm is an entry of another anthology, Constellations, involving Revati Jendra and a violation of the Prime Directive, lasting 32 pages long. Much longer than an excerpt. And much too wordy, as well.

As a whole, the manga art and style translate well. However, the main characters speak a tad too politely, as if their dialogue was written by a different culture (which it was). Also, the word balloons take on odd, extra-large shapes, often taking up too much panel room… making the action and speakers a tad confusing to decipher. Overall, it is a worthy first attempt at adding manga to the Star Trek Universe.

Strength: The manga portion is fun and exciting to read.
Weakness: Including the First, Do No Harm entry.
WTF Moment: I never knew the Star Trek Universe included Gundam Mechs.

Notable Quotes:
– “Their logic is commendable, their actions regrettable…”
– “History has shown that what was once regarded as fiction often becomes reality.”
– “I smell a big muscovite rat.”
– “Your ship is your girlfriend? Creepy.”